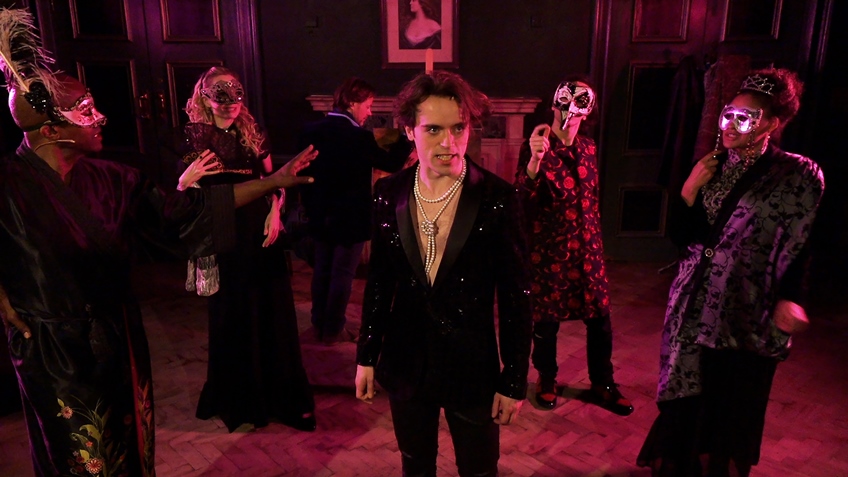 Dorian A Rock Musical is based on Oscar Wilde’s The Picture of Dorian Gray, an over-written and clumsily constructed novel, which never reveals the true nature of Dorian Gray’s hold over his male friends, though there were few in 1890 who couldn’t guess.

Those who did review it damned it as “esoteric prurience,” “malodorous putrefaction” and said it was “suitable reading for outlawed noblemen and perverted telegraph boys.” The last comment was a direct reference to the Cleveland Street male brothel scandal of 1889.

The novel did Wilde immeasurable harm and was used against him during his first trial. “There is no such thing as a moral or an immoral book,” he declared. “Books are well written or badly written. That is all.”

(NB. Dorian is corrupted by a book. The book, though never named in the novel, was, as Wilde was forced to admit in court, J J Huysmans’s A Rebours).

“Youth is the one thing worth having,” said Wilde. “The tragedy of growing old is not that one is old but that one is young.” Dorian (who has the physical features of Bosie Douglas, Wilde’s lover) sells his soul for the gift of eternal youth and indulges his passion for pleasure and sin.

Thirty years of debauchery inevitably leaves its mark. The conceit, however is that the debauchery is visible only on a picture painted by his friend, Basil Hallward, who idolises him and is murdered by him. Dorian remains eternally beautiful. The portrait becomes the emblem of his conscience, a monstrous and ugly thing to be locked up in the attic

The novel is remarkably prophetic of Wilde’s downfall and certain passages (with hindsight) read as if he were expressing his worst fears.

The story’s popularity is undimmed. There have been numerous productions on stage, film and television. There have been at least five operas, at least eight musicals and an amazing number of ballets. None has really succeeded. Most have been calamitous.

Dorian is billed as a new rock musical. So, presumably, it is a re-write of a production I saw at Riverside Studios in Hammersmith in 2014. All I remember about it now is that it was terrible and not helped by the two inexperienced lead actors, children of famous actors.

The music and the lyrics are by Joe Evans. The book and direction are by Linnie Reedman. The script is poor and the cast makes heavy weather of it. Acting and production are below par; but Bart Lambert’s performance as Dorian is a definite improvement on the original actor.

Dorian A Rock Musical, filmed and streamed at Cadogan Hall, can be watched online until 12th August. You can find out more by following this link.