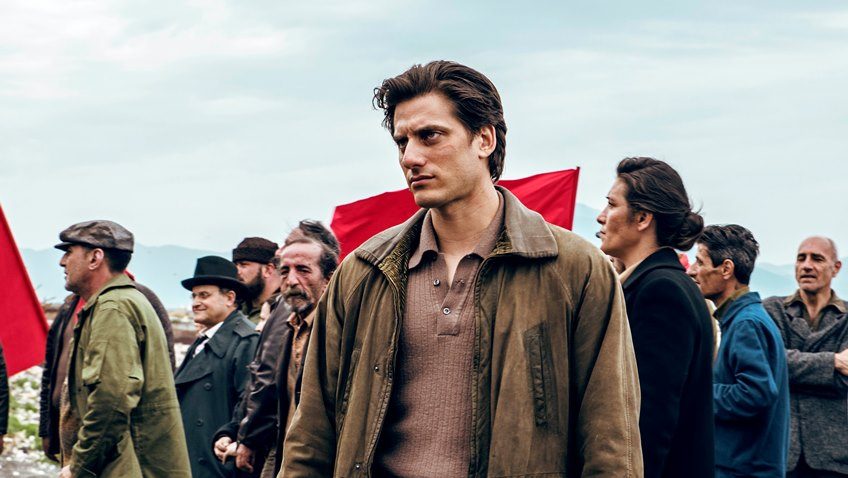 Though best known for his two novels about wild dogs in the Klondike Gold Rush, White Fang and Call of the Wild, Jack London’s semi-autobiographical novel Martin Eden has only what Emile Zola refers to as “La Bête Humaine”, or “the human animal” as its subject. Italian director and co-writer Pietro Marcello’s bold, romantic adaptation, set not in Oakland, California but in Naples, Italy, is the third screen adaptation of Martin Eden, though it falls short of being the definitive one.

Following the novel’s plot fairly closely, the “human animal” is the eponymous Martin Eden (Luca Marinelli) a sailor and manual labourer with aspirations above his social class. After selflessly intervening to save a stranger, Arturo Orsini (Giustiniano Alpi), from a beating on the docks, he meets, and falls in love with the boy’s older sister Elena Orsini (Jessica Cressy), a pretty Neapolitan aristocrat. It is not exactly beauty and the beast, as Martin is ruggedly handsome, with bright, animated eyes, and a certain innocent, eager charm. His animalistic side emerges when Elena asks Martin where he got the scar on his face, and he defiantly replies that ‘the wretch who did it to me now walks with a limp.’

Invited to lunch by the grateful Orsini family, Martin struggles to impress his polite, if quietly judgmental hosts, but cannot escape the contemptuous glances of the housekeeper Carmela (Anna Patierno) when her young mistresses’ attraction to the sailor and his infatuation with her becomes apparent. There is something of the Uncle Tom to this servant who seems threatened by Martin’s aspirations. The stage is set for the bumpy saga of class warfare that it is follow.

Martin sits in rapt attention when, after dinner, Elena plays the piano. ‘I hope you weren’t bored’ she modestly asks her guest. ‘Bored?’, he replies, ‘it was the best day of my life.’ Undaunted by the chasm between them, Martin expresses his wish to know as much as Elena and vows to read voraciously and become a famous writer.

‘What you need is a good education’, Elena replies, suggesting he return to school and go at it methodically. The school mistresses he consults repeat this advice. But after envisioning himself spending years with school children, he rejects the slow path and buys a pile of books, bargaining down the price.

From here on Martin’s Bildungsroman speeds up and characters come out of nowhere to play a significant role in his life. A generous widow, Maria (Carmen Pommella, very good) with her two children meets Martin in a train as he is going off to sea. You wonder if you haven’t missed a scene when, within no time, she has invited him to live with her family as though they are old acquaintances.

This invitation is well-timed. Martin has been living with his sister (Autilia Ranieri) and brother-in-law Bernardo (Marco Leonardi), an ignorant, working-class brute: the class stereotypes work both ways here. Bernardo’s resentment of what he considers Martin’s freeloading and, more pointedly, his pretentious literary ambition reaches a climax when Bernardo kicks him out. Maria gives this total stranger a home and room to write in, as if proud that she is nurturing the next Tomasi di Lampedusa.

Martin, to his credit, is devouring books. He has graduated from literature to political philosophy, reading the polymath British scientistic and philosopher Herbert Spencer. He is also writing. Like Jack London, Martin is sending manuscripts off to publishers and getting accustomed to the discouraging rejection game.

At a party, a few verses from Martin that leave the guests speechless, attract the attention of poet-philosopher, Russ Brissenden (Carlo Cecchi). In the novel, Brissenden is modelled after the Northern Californian, bohemian poet George Sterling, who inspired London in real life and indeed was a cult figure. Like Martin, who struggles with socialism, Brissenden believes in the individual and in the Spencerian theory of evolution. Spencer’s survival of the fittest, an expression he coined after reading Darwin’s Origin of the Species, sits uncomfortably with the prevailing push of Socialism.

The film comes to a standstill in the scenes of political rallies as Martin, who is loyal to his working-class roots while seeking to escape from them, has to reconcile his belief in the individual with the Socialist movement. At times it feels like we are witnessing the rise of Mussolini and at other the rise of Stalin.

This confusion is one of the film’s strengths as it stresses the universality over the centuries of Martin’s predicament and of class warfare. It is especially relevant today when educators, academics and ministers are grappling with the problem of how to shrink the gap between the well-educated middle and upper classes and working-class families. Some top universities are actively searching for diamonds in the rough with scholarships on hand. Martin Eden would fit the agenda, except for his age, which is as big an obstacle as is class in education and in the job market.

Unlike Elena, Brissenden is perceptive enough to recognise the raw originality in Martin’s writing and, unlike Elena, he does not criticize the downbeat nature of Martin’s stories. As Martin’s autodidacticism progresses, we become aware of the limitations of Elena’s education, (she coyly tells Martin that Baudelaire is ‘a bit bold’), Her education is not as broad or natural as Martin believed, or perhaps it reflects the level of education available for an upper-class woman in Naples at the time.

The problem for the audience is that we have no idea what Martin writes (at times it is verse, at other times, stories) and so we cannot judge if the rejection letters are merited. Then comes the turning point in the film, and arguably the best scene, when Maria bursts into Martin’s bedroom to give him an envelope that is his big break. London and Marcello have both been there and invest the scene with the relatability and emotion absent from too much of the film.

This scene divides the film in half. In the second half Martin is wealthy and successful – the sets and costumes change dramatically, as do Martin’s looks. But success has not brought Martin happiness. His insecurity turns him into a bitter and resentful man, turning against the hypocritical Elena who is now ready to marry him.

Marcello’s adaptation is a visual tour de force, but when it is not moving too quickly to create any depth in the characters, it comes to a halt. Like Martin, the film gets bogged down in political theories, ideologies and rants reflecting conflicting ideas and emotions that make Martin suicidal but leave the audience cold.