Home / NEWS / The Beatles, Grease and Antiques Roadshow: this is the average 60-year-old 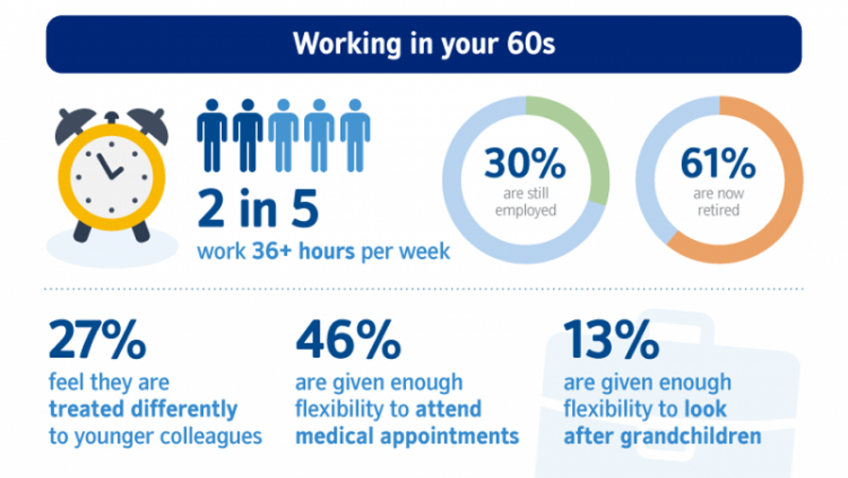 The Beatles, Grease and Antiques Roadshow: this is the average 60-year-old

The average 60-something prefers Antiques Roadshow to Strictly Come Dancing, favours The Beatles over the Rolling Stones, has an income of just over £20,000 a year, according to a study.

Researchers found that, while many people of this age are financially settled having paid off their mortgage, health worries outweigh anything else for 62 per cent.

Despite exercising three times a week, more than half of those in their sixties suffer from back pain, a third have high blood pressure and 28 per cent get regular headaches. 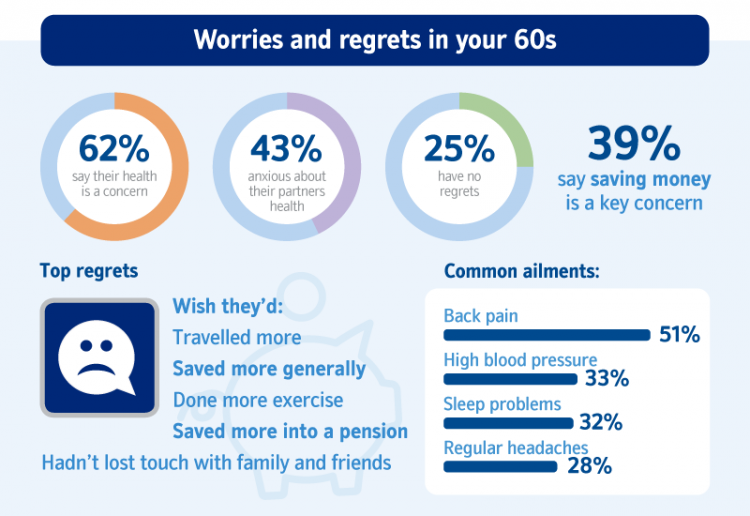 The study of 1,800 adults aged 60 to 69 is the latest in a series of reports from Nationwide Building Society looking at the financial and social life of different age groups.

It shows the average 60-something has approximately £338 of disposable income each month, which is spent on one night in the pub, an evening at a restaurant and a couple of days out with the family.

Seven in 10 people aged 60 and over live in the house they purchased at the average age of 28 – and 60 per cent have completely paid off the mortgage. One in five are still renting.

A third of those polled are still in employment, with two in five still working an average of 36 hours a week. Six in 10 people have retired.

Andrew Baddeley-Chappell, Nationwide’s Head of Savings and Mortgage Policy, said: “60s is one of the most varied age groups as for many it covers the transition from employment and retirement.

“At a time when some would like life to start slowing down, our latest life-stages survey shows that this may actually be far from the truth. In fact, it appears that for many the hamster wheel is turning just as fast.”

When it comes to entertainment, in addition to a rather modest social life, 60-somethings watch 13 hours of television each week – sitting down to enjoy Midsomer Murders or Coronation Street, and will still watch old episodes of Morecombe and Wise.

Classic movies such as Grease and Shirley Valentine appeal most to people in this age category, as well as Singin’ in the Rain, Jaws and Ben-Hur.

In terms of music, older artists such as The Beatles and ABBA still feature highly on playlists, but modern super-star Adele is also loved by many.

The findings show those that do drive are most likely to travel around in a Ford Focus or Fiesta.

Incredibly, 75 per cent of 60-somethings are in a relationship, the average length of which is 31 YEARS.

In addition to their spouse, 24 per cent of people live with a dog, while the same percentage has a cat.

Although health fears dominate the list of things which worry people aged 60 and over – unsurprising given the list of common ailments which includes sleepless nights, stress and cholesterol – money does continue to be a cause for concern.

Sadly for one in five 60-somethings their annual income is less than £10,000 a year, and one in 10 have no disposable income to play with at all.

A further third of those polled have less than £100 a month to spend on themselves, and as such one in 10 have considered downsizing their home to make life more affordable.

While 22 per cent wish they’d put more into a pension when they’d had the chance.

A third of those in their sixties constantly worry about helping their children and grandchildren financially, while a quarter fret about paying the bills. 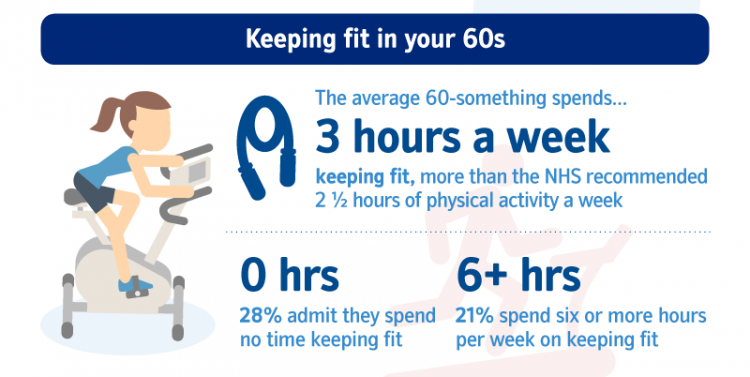 When it comes to regretting past actions, 36 per cent wish they’d travelled more when they were younger, while a quarter would have liked to have done more exercise.

A fifth regret the fact they’ve lost touch with relatives and friends, and 12 per cent say they should have spent more time with their family.

Interestingly, 16 per cent will always feel some sadness about a lost love – someone they met and let get away.

Happily, a quarter of adults aged 60 to 69 have absolutely no regrets about their life so far.

Andrew Baddeley-Chappell continues: “Given that health is a major worry for a lot of 60 somethings, it’s good to see that a significant proportion are acting on those worries and exercising regularly during the week.

“It’s also no surprise to see money being high up on the list of worries, especially given their financial situation. It’s not

just about the present either, as exercising more and saving more are also key regrets in a 60 something’s life.

“What is nice to see, though, is that there are people who have lived the life that they wanted and have reached 60 with no regrets”.

Helen Lederer, 62, the comedian, writer and actress: “Accepting that one is officially middle aged is always a challenge. But it can bring with it a wisdom and confidence that is a rather nice side effect as well as enabling less anxiety and more partying.” 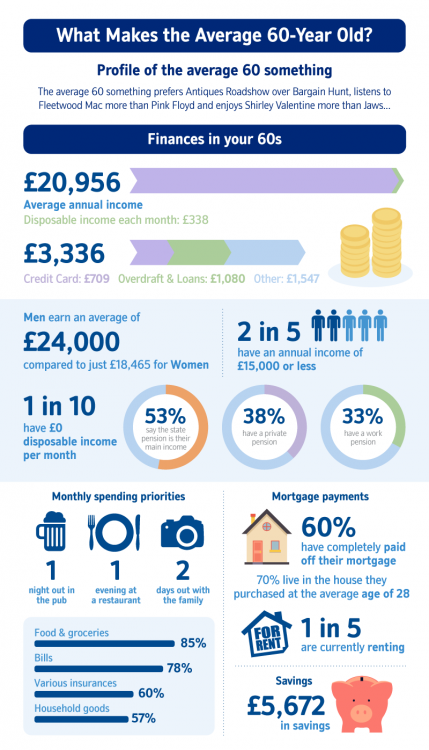 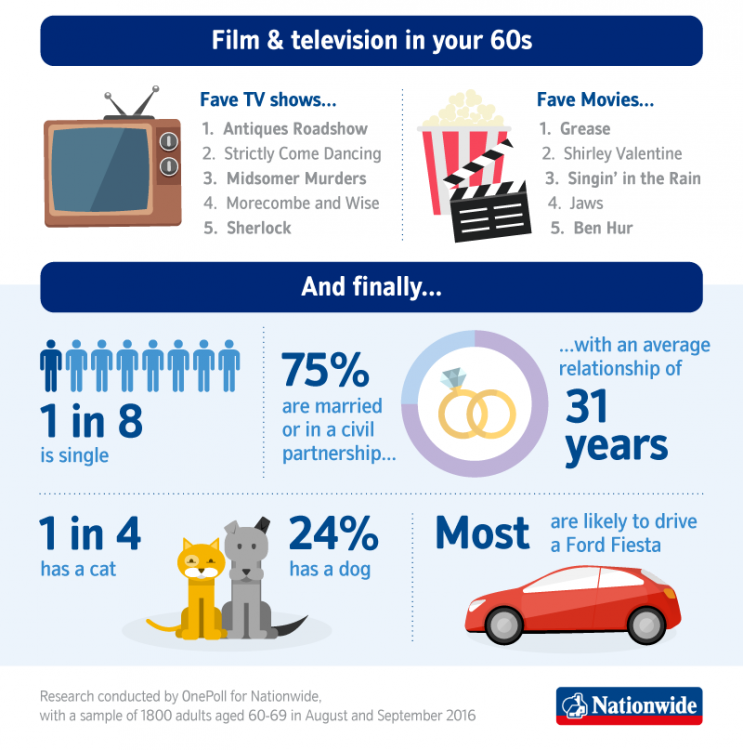