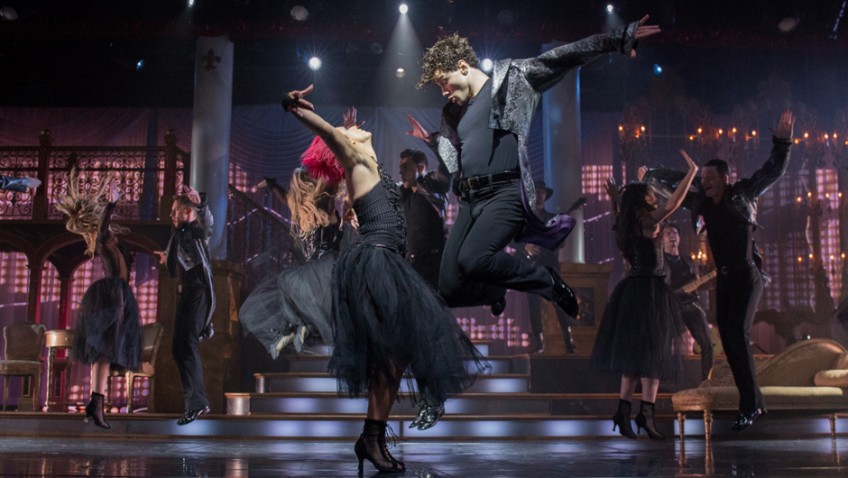 Fire in the Ballroom at The Peacock

Burn the Floor is ballroom dancing but not as you know it.  It has been reinvented and placed within a contemporary setting.

Founded in 1999, the company has been all over the world. They have danced in over 150 cities in 29 countries.

Their latest ballroom extravaganza is called Fire in the Ballroom. The production is notable for its incredible speed and its phenomenal energy. That is, once it gets past the kitschy opening number in which Johann Strauss’s Blue Danube waltz (composed in 1886) is waltzed by dancers dressed in tacky 18th century costume.

All the dancing takes place downstage. There is a lot of dry ice. The musicians are on stage on a tiny platform behind the dancers. The set is cheap by West End standards.

The production is a showcase for 14 talented, personable, sexy, champion international dancers, mainly from Australia and Italy, but also from England, Northern Ireland, China and South Africa.

The boys – often stripped to the waist – and the girls strut their stuff non-stop with total and seemingly inexhaustible commitment. The stamina is extraordinary; but nothing develops.

Emphatic, strenuous, aggressive, hyperactive numbers follow one after the other until they all blend into each other.  Attempts to tell miniature dramas to pre-recorded music are not as successful as the dance numbers for dancing’s sake.

Strictly Come Dancing than going to the theatre; and there is nothing wrong with that whatsoever.

Fire in the Ballroom is a fun show and the fast-moving legs are absolutely fantastic.

The adrenalin is still there and at its highest pitch in the extended curtain call. A very happy audience gave the cast a standing ovation.