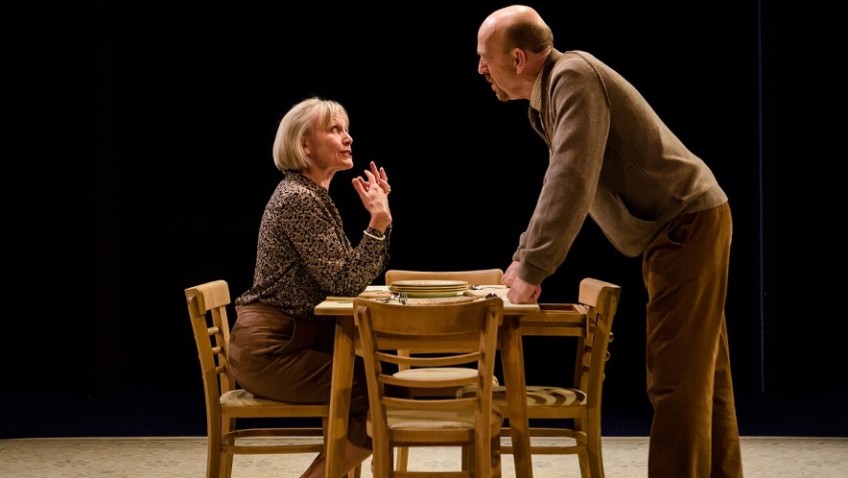 Caryl Churchill in one of her one-act plays presents 27 alternative scenarios!

David Mercantali’s production is its first major revival since its premiere in 1997.

HEART’S DESIRE, the first play, is an amusing example of the Theatre of the Absurd, which flourished in the 1950s and early 1960s, led by Eugene Ionesco and Samuel Beckett.

A father (Andy De La Tour), a mother (Amelda Boxer) and an aunt (Mona Goodwin) are waiting for the return of their 35-year-old daughter after a long absence

They never know who might enter the room next. It could be their daughter, their drunkard son, screaming children, gunmen, a lesbian Australian backpacker. It could be an ostrich.

The tape is rewound 27 times! There are 27 alternative scenarios, which become more and more surreal. How do the actors remember which sequence they are in?

The acting, technically, is extremely expert and very funny. Mona Goodwin is a hoot.

BLUE KETTLE, the second play, is more serious and sadder and not nearly as accessible. A con-man (Alex Beckett) tricks sad, vulnerable old women into believing that they are his long lost mother and that he is the illegitimate baby they abandoned at birth.

As the play goes on the language disintegrates and the words “blue” and “kettle” start to replace all the nouns and verbs until, blue me, the audience finds itself listening to a lot of kettle – geriatric nonsense.