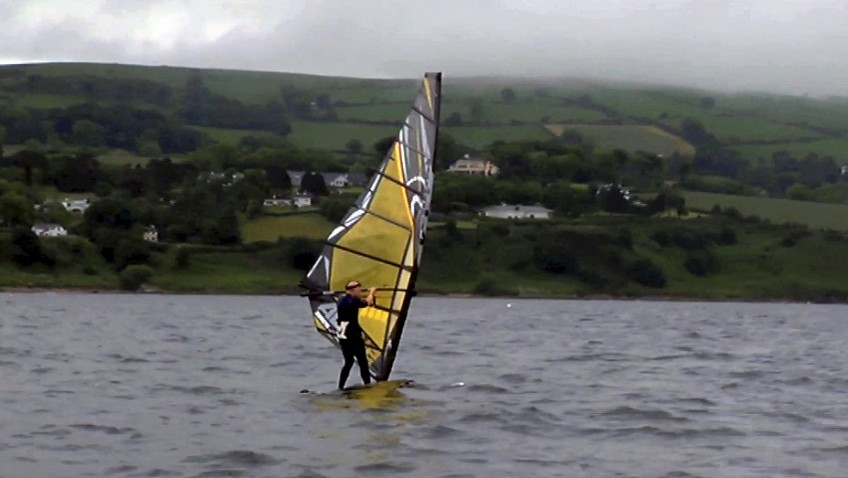 A thrill-seeking granddad has become a world record-breaker after WIND SURFING from Northern Ireland to Scotland in just 100 minutes – quicker than a ferry.

Chris Loughridge, 57, made the 16-mile journey in record time on Sunday – celebrating his arrival on the Scottish coast with a dram of whisky.

And Chris made the trip across the North Channel from the village of Cushendall in County Antrim to the Mull of Kintyre lighthouse quicker than a ferry.

Chris, a dentist, said he was surprised he completed the journey because the wind and rain were so bad he even couldn’t see the Scottish coast until he was only 400m away.

The dad-of-four, who also has two granddaughters, said: “I couldn’t see Scotland because the weather was so terrible

“It changed so much, I didn’t know where I’d end up when I sailed out. The wind direction changed completely. It was very difficult to sail – very choppy.

“I kept singing ‘O flower of Scotland when will we see your like again’ because I couldn’t see the coast at all.

“It’s a complete fluke I managed to land at the Mull lighthouse in that weather.

“But we got it right on the nose. It was an absolutely incredible sight.”

Chris, who took on the challenge for charity, stepped off his board and onto a rock to mark the end of his trip.

The adventurous granddad, who windsurfs twice a week and sails in the summer, said he was lucky to find the small rock to land on when he reached the choppy coast.

He said: “Over the years I’ve often looked across at Scotland on the shore and always said I wanted to windsurf it – so I did.

“I was so lucky there was something to stand on when I got there because the water was so bad. It’s the craziest thing I’ve seen in a long time.

“The journey was incredible. I’m still grinning from ear to ear about it. I’m stoked. It was on my bucket list and I’ve always wanted to tick it off.”

And the Belfast man said he was greeted by two giant seals when he arrived on the Scottish coast. He said: “When I jumped on to the rock to get my picture taken some of my gear slipped in to the water and two enormous seals jumped up around it.

“I didn’t know how friendly they were so I left the bag for the guys on the boat to pick up while I swam back out to them.”

“The wind surfing part of the trip was far easier. The boat trip on the way back was horrendous. I got whip lash.”

Now Chris is just waiting for the Guinness World Book of Records to officially recognise his crossing as the fastest windsurf across the North Channel.

His feat was witnessed by two pals who followed in a boat – cameraman and dental patient, Albert Kirk, and Fintan McGrady who drove the boat.

Rather than take it easy after such a gruelling challenge, Chris was straight back to the gym at 6am on Monday morning and then in to work at his dental practice.

Alongside his wife Kathy, 57, Chris is no stranger to daredevil fundraising efforts.

He said: “We climbed Ben Nevis, and climbed to the Everest base camp.

“But I got altitude sickness.

“I said to her that the next time I tried something, it would be at sea level. And you don’t get much more sea level than this.”

Chris has now raised more than £10,000 for Marie Curie Cancer Care over the years to support Kathy, who lost her mum, brother and sister to cancer in the same year.

He said: “I’m fundraising to support the amazing work that Marie Curie do.

“It would be great if you could donate and share my page so I can raise as much as possible to help them care for people with terminal illnesses to give them the choice to die at home.”

The Troon to Larne ferry crossing between Scotland and Northern Ireland takes around 2hours 15 minutes.

To donate to Chris’ charity drive for Marie Curie, visit justgiving.com and search for Chris Loughridge