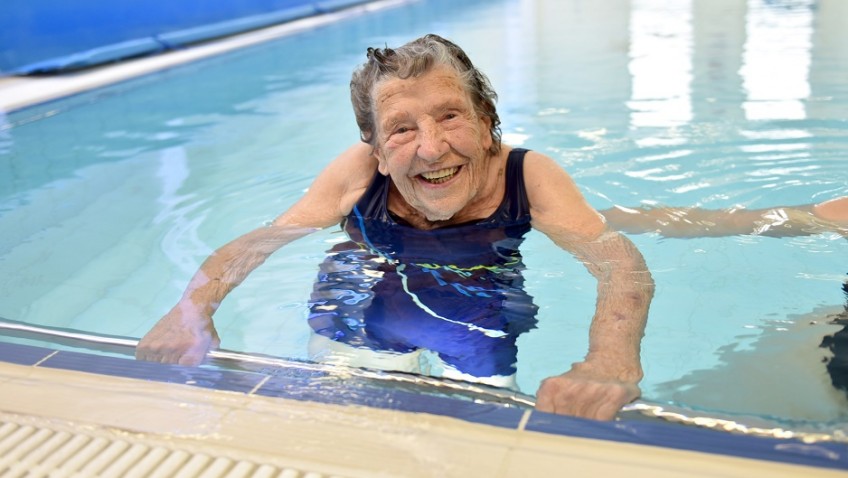 A 100-year-old dementia sufferer brims with delight as she goes for a swim – for the first time in 35 YEARS.

Great-grandmother Sadie Knight thought she would never go for a dip again after giving up swimming in the 1980s as old age began to take its toll.

But as a treat to celebrate her centenary, staff at her care home decided to grant her number one wish.

With the help of two physios, Sadie splashed about in her local swimming pool in Cheltenham, Glos., for 30 minutes – and even managed a bit of breast stroke. 100 year old Sadie Knight from Oakhaven Residential Home who has had her wish come true to go swimming again! Pic of Sadie swimming at the national Star College

The sprightly centenarian, who grew up in south east London before moving to Seaford, East Sussex, and later Devon, said: “It was lovely, just beautiful.

“I can’t walk a lot now and to go swimming was such a sense of freedom.”

Sadie loved the water as a little girl when her mother would take her to the beach on rare holidays between the First and Second World Wars.

Later in life she joined swimming clubs and went for daily dips in the sea with husband Alf, a former Royal Navy officer.

She began to swim less regularly in the 1980s, when Alf fell ill with liver cancer, and although she still loved the water became nervous about going in alone.

When he died some years later, Sadie hung up her swimming costume for good and two years ago moved to a residential home after being diagnosed with dementia.

But this week, more than three decades on, the former print worker was given the chance to relive her past by staff at Oakhaven Residential Care Home in Cheltenham where she lives.

Her daughter, 69-year-old Eunice Dyce, also of Cheltenham, joined her mum, who walks with a frame, for her special swim on Wednesday.

Eunice said: “It was absolutely fantastic. She had been talking about it for a while and she said, ‘It will be like riding a bike – you never forget.’

“They used a chair to pop her into the water gently and she stayed in there for half an hour.

“She must have been tired because she was practically swimming by herself. She couldn’t believe it.

“She can’t walk by herself and uses a trolley. But in the pool she was weightless and could move her legs and arms freely.”

With the help of staff at National Star, a college for disabled people, they took Sadie swimming in their 34C aquatic therapy pool.

“She was determined to do as much as she could for herself.”