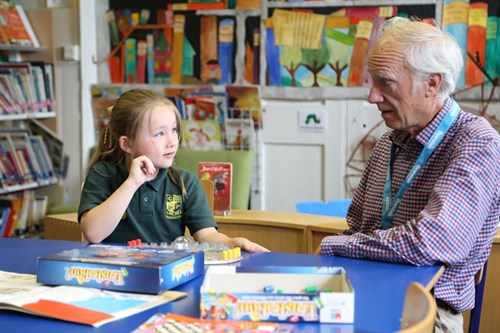 Broadcasting the work of Beanstalk

Beanstalk is a national charity that provides one-to-one literacy support to children who struggle with their reading ability and confidence. Each Beanstalk trained reading helper works with on average three children and provides consistent support on a weekly basis, for a whole school year. Together, they read, play and talk. With Beanstalk’s support the child’s approach to reading and learning is often transformed.

I spoke to one of its enthusiastic volunteers the retired BBC radio broadcaster and journalist, Robin Lustig. Robin is a former presenter of The World Tonight on BBC Radio 4 and Newshour on BBC World Service. He has been working with the Beanstalk charity for over 2 years and is passionate about his work with children in his local school.

After a rigorous selection process involving checks and an interview he attending a two-day training course before he was allocated 3 children for 30 minutes twice a week.

Each volunteer has the same three pupils for 3 terms, one academic year, and they have a one to one session where the volunteer helps the child with their literacy problems. It may be that the child has behavioural difficulties, dyslexia or that English is not their first language.

Robin has helped the struggling readers often by just reaching out to them, sitting playing cards, talking and allowing them to feel comfortable. Listening to him talking about his charges he came across as the perfect patient person to guide a child towards the joy of reading. Robin himself is a charming man with a talent for putting listeners at ease during his 25-year broadcasting career. When he was first employed by the BBC he said, “Mikhail Gorbachev was general secretary of the Soviet Communist Party; George Bush was President of the United States; Margaret Thatcher was living at 10 Downing Street.

It was 1989. The internet had not yet been invented, nor had mobile phones. The word Google did not yet exist; nor did Wikipedia. It’s difficult, thinking back, to recall how journalists operated in those prehistoric times – but somehow we managed.”

In 1990 when the wall was breached he was reporting from East Berlin, and in the radio newsroom when the death of Princess Diana was announced in 1997. He was summoned to the studio on 9/11 with a phone call “A plane has crashed into the World Trade Centre in New York – how soon can you get here?”

“And so it goes on. World crisis after world crisis; wars in Afghanistan and Iraq; the near collapse of the global banking system; and then the Arab Spring. I feel exhausted just thinking about them.” He added.

I wonder whether the children he is helping to read have any idea of what this fascinating man has seen and heard through his professional life.

The inner London school where he is a Beanstalk volunteer is multi-racial creating many problems of communication. The new challenge he faces by helping these early learners has given him a real sense of achievement and when one of his proudest moments is when child says “I can read by myself now.” The charity works with schools in providing volunteers which are now more needed than ever, as so many local authorities cannot afford to employ teaching assistants.

Beanstalk reading helpers are trained to recognise what challenges each child faces and tailor their sessions to support each child.

The books used are provided by Beanstalk and often the child is allowed to choose their own reading material but it is the interaction between the reader and the supporter which gives confidence and inspires satisfaction between both.

Robin read me out a card he had received from one of the children which said “Thank you for helping me, I can read by myself now and I am not reading a baby book”.