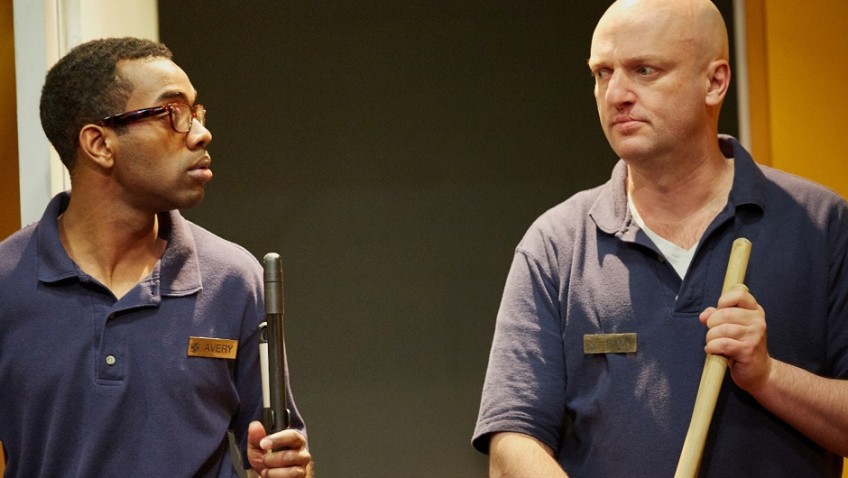 Annie Baker’s The Flick had its premiere off-Broadway in 2013 and went on to win the Pulitzer and many other awards. It arrives in London with two of the original American actors, Matthew Maher and Louisa Krause, and their American director, Sam Gold. The setting is highly original: a bijou cinema with seven rows of empty tip-up seats in Massachusetts.

There are just three main characters, all in dead-end jobs: a cleaner and a projectionist played by Maher and Krause, and a student who also cleans during his vacation, played by a British actor, newcomer Jaygann Ayeh.  All three actors are excellent.

“What do you want to do when you grow up?” the 20-year-old student asks the cleaner, who is in his late thirties and has a crush on the projectionist which she does not reciprocate. She tries to seduce the student.

Annie Baker, in a series of scenes, explores the relationship (and the lack of relationship) between the three, whilst we watch them at work, cleaning up the debris left by cinemagoers.

The play, a deliberate slow-burner, comic and sad, works so well, precisely because of the setting and because the actors and the director are not afraid of the silences and are confident enough to take their time.

The production lasts three and a quarter hours, including interval, and the actors never once lose the audience’s attention.

The two cleaners are movie lovers and like nothing better than to play a game of “Six Degrees of Separation”, linking in six movies the connection between two unlikely film stars.

Annie Baker is also a movie lover and The Flick is a cri de coeur that there should continue to be a place for film in a digital age.