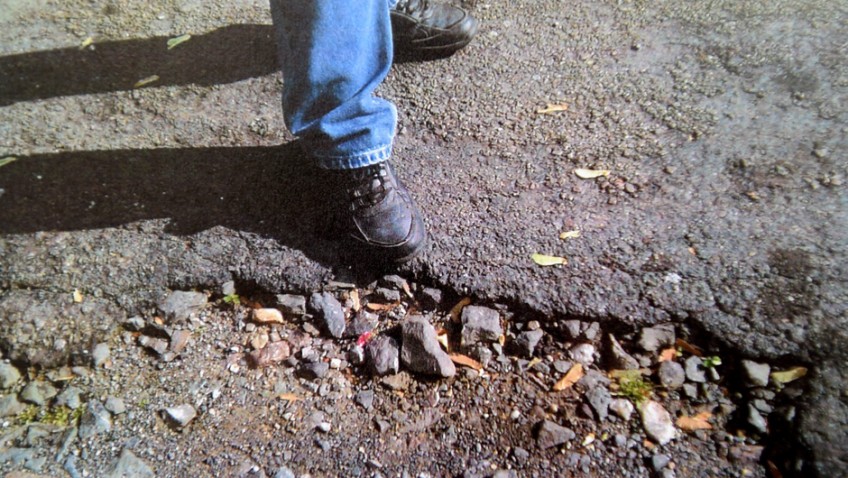 A pensioner has been awarded an out-of-court settlement after she broke her elbow when she tripped over a THREE-INCH deep pothole.

Brenda Tooth, 67, also suffered bruised ribs when she stumbled over the cracked pavement as she walked home from the vets.

She was with husband Michael when she tripped over a three-inch deep (7.6cm) pothole and into the road after stepping off the kerb.

Ambulance crews dashed to the scene in Leonard Street, Derby, on August 25, 2012 and rushed her to Royal Derby Hospital.

Mrs Tooth stayed in hospital for six days and was unable to work for nine weeks.

She had a metal plate and several screws fitted into her elbow following the accident but still struggles with her arm movement today.

Mrs Tooth sued Derby City Council, who are responsible for the upkeep and repair of pavements, claiming a breach of statutory duty.

Yesterday the authority agreed to pay her an undisclosed out-of-court settlement.

Mrs Tooth, from Shelton Lock, Derby, said: “It could have been a lot worse. I could have tripped in front of a car. I’m grateful it wasn’t worse.

“I just really wanted the council to know that it needed to get it repaired because the quality of some of our roads is really poor.”

Mrs Tooth won her claim after it was pursued by Derby-based law firm Dedicated Accident Solicitors.

Solicitor John Das said: “The council had inspected Leonard Street only a month before Mrs Tooth’s fall and had failed to identify the potholes as a problem.

“They inspected the area again a month after Mrs Tooth’s accident and still took no action.

“It was not until the following April the council noted the problem and repaired the area. Unfortunately, that was too late for Mrs Tooth.”

A spokesperson for Derby City Council said: “It is our statutory duty to inspect and maintain the city’s highways and repair any faults.

“We endeavour to do the best we can with the resources available but when mistakes are made, as in this case, our duty is clear and a mechanism is in place to make amends.

“Regarding Brenda Tooth and the injuries she sustained in August 2012, Derby City
Council has recognised, following an investigation, that our inspection system didn’t work as well as it should.

“We have apologised to Mrs Tooth for what happened and have agreed a compensation payment.”

By Laura Savvas and Chris Peddy