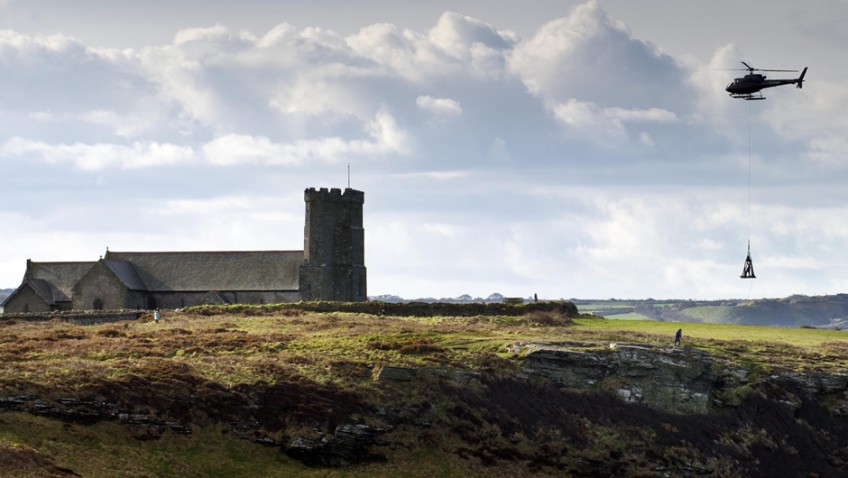 English Heritage face further criticism over their ‘dumbing down’ at one of Britain’s most iconic sites.

The organisation responsible for historic Tintagel Castle have already been accused of vandalism with a huge rock carving of the face of Merlin the magician.

Critics said it was a crass piece of ‘Disneyfication’ to build on visitor numbers at the North Cornish landmark which is associated with King Arthur.

But three months later the charity has now unveiled an 8ft bronze sculpture of the legendary Camelot ruler which will become the centrepiece of a new visitor experience.

It is aimed at exploring the castle’s history and the role of ‘legends’ in shaping the site for visitors. Created by artist Rubin Eynon, the statue has been named Gallos – the Cornish equivalent of power.

English Heritage say it has been inspired both by King Arthur and other stories from the castle’s 1,500-year history.

It is so big it had to be airlifted onto the site by helicopter and will go on public display at the end of the week alongside a series of panels charting Tintagel’s illustrious past.

Matt Ward, property manager at the castle said: “Tintagel has such a complicated site.

“The old interpretation just did not do it justice, they did not really tell that complicated story.

“There are links to King Arthur, there is no getting away from that.

“But what we want to do is educate people and tell them that, at the time, if there was a King Arthur, this is what was going on at the castle.

“The stories are intertwined, there is no getting away from the legend and the fact.”

Last month a group of 200 Cornish historians criticised plans by English Heritage to turn Tintagel Castle into what they called a “fairytale theme park” based on the legend of King Arthur.

In a letter the Cornwall Association of Local Historians called on caretakers to highlight the Castle’s true past instead of focusing so heavily on the Arthurian legend.

There were also complaints after the head of Merlin was carved into the rock-face on the site.

English Heritage defended their approach to preserving and celebrating Tintagel saying they were committed to telling its story.

“It is eye-catching and tasteful and something that celebrates what Tintagel is all about.”

The public will get their chance to assess the sculpture over the Bank Holiday weekend when it opens on Friday.