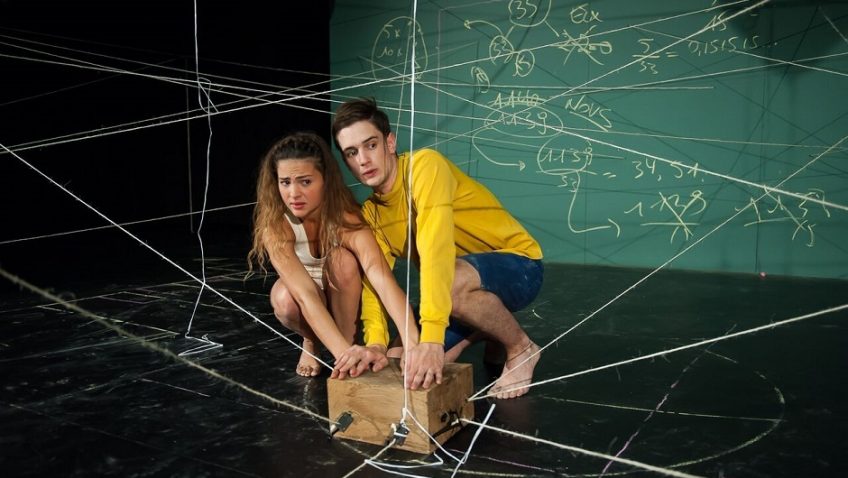 The 2004 Beslan siege is seen through a child’s eyes

Beslan is the third largest town in the Republic of North Ossatia-Alania in the Russian Caucasus. In September 2004 armed Chechian terrorists took 1,100 children, teachers and parents hostage.

The siege took place in the number one Beslan primary school and lasted three days. 777 children were taken hostage. 186 died in the shoot-out between the Islamic terrorists and the Russian security forces

Us/Them was created by Bronks, a Belgian touring youth theatre aimed at younger audiences and based in Brussels. The production was a big hit at the 2016 Edinburgh Festival and won an award.

Playwright Carly Wijs, taking her inspiration from a BBC programme, Children of Beslan, has decided to tell the story of the siege entirely from the perspective of two primary school children, a boy and a girl.

Wijs’s 60-minute production is in no way a documentary. It is a highly physical and highly theatrical piece and includes some hearty, raucous (tongue-in-cheek) singing of Russian songs.

The innocent performances by the two Flemish actors in their twenties are touching and amusing. Gytha Parmentier and Roman Van Houtven act in fluent English.  They are verbally and physically very childlike, dashing around and often talking at the same time.

The kids begin by chalking out the ground plan of the school on the floor. They then use a seemingly endless supply of string to produce a giant’s cat’s cradle, which fills the stage and represents the wires of a detonator, ready to release the booby trap bombs, represented by balloons.

The horrors of the massacre, with the very young children, many in a state of undress, can be seen on various videos on the internet; but these distressing scenes play no visible part whatsoever in Wijs’s production.

The National Theatre advises that the performance is suitable for 12-year-old plus.