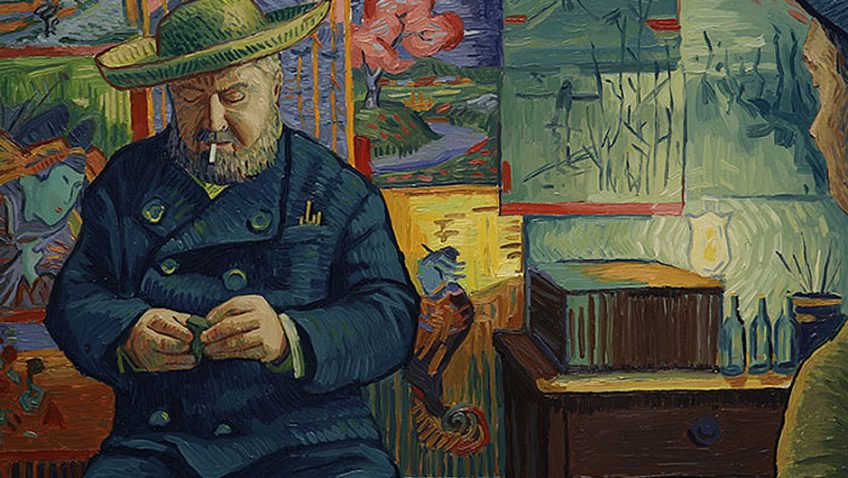 Loving Vincent (Altitude). Vincent Van Gogh painted over 800 paintings and sold only one in his lifetime. Why did he commit suicide in 1890? What happened to make him suddenly unbalanced? Did he shoot himself or was he shot? Armand Roulin turns private investigator and retraces Gogh’s last days and interviews people in Arles. Dorota Kobiela and Hugh Welchman’s film, the world’s first fully painted feature film, is truly fascinating. Every image on screen is a real or pastiche Van Gogh oil painting. Portraits and landscapes are cleverly animated. It’s a pity the actual dialogue should ring false.

Marshall (Sony). Civil Rights Lawyer Thurgood Marshall (1908-1993) was the first American Supreme Court Justice. In 1941 Marshall, already a key figure in the National Association for the Advancement of Colored People, defended a black chauffeur who was accused of raping his boss’s wife. The chauffeur denies it. Marshall (Chadwick Boseman) is not allowed to speak in the courtroom and has to speak through a Jewish lawyer (Josh Gad) who has never tried a case before. Courtroom dramas are usually good value and this one is particularly interesting because it is based on fact. Can a black man get justice from an all-white court? Why would a black man lie? The answer is because the truth would get him lynched.

The Ritual (Entertainment One). Four men, friends from university days, go on a hiking holiday in Sweden and get lost in the forest; and this is quite horrific enough without having to resort to a Norse religious cult for its thrills. And besides The Wicker Man did this sort of horror so much more convincingly. The real horror is in the opening sequence when a man is murdered in a food store and his friend witnesses it and does not intervene. Director David Bruckner keeps suggesting that “the lost in the forest” scenario is his recurring guilty nightmare derived from this traumatic experience.

Big Cats (BBC). Cats are elusive and hard to find. There are 40 species. It’s a lonely life, hunting and eating. This documentary is remarkably successful with its use of the latest technology and scientific research. Only lions are social and they take pride in working as a team. Here they can be seen chasing a giraffe but not killing it (for fear of upsetting the audience?) Killings mostly take place off-screen. Cats hunt alone, callous, ruthless, constantly in search of the next meal. Even birds are not safe. A leopard in the snowy Himalayas tries desperately to find a mate to have sex with. There are no scenes of mating. The athletic agility of the sprinting cheetah amazes. There are some marvellous shots of the equally athletic springbok antelopes leaping high and far to escape.