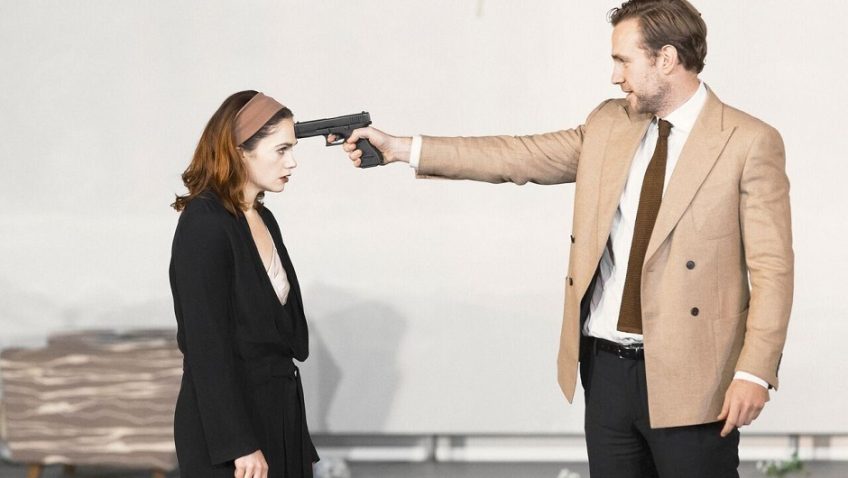 Hedda Gabler as you have never seen her before

Hedda, just married, returns from her honeymoon, bored out of her mind. She despises her husband, Tesman, whose academic career is going nowhere and she is appalled that she is pregnant.

“Life,” said Ibsen, “is not tragic – life is ridiculous – and that cannot be born.”

Hedda Gabler is one of the great modern roles.

Ibsen’s play works best in its correct period, 1890, but it is interesting to see Ivo Van Howe’s radical updating and deconstruction.

The play is no longer the familiar 19th century social drama we know. There is a new translation by Patrick Marber. The production is existential.

The stage is a huge space with bare walls. It has a cold, clinical look. The furniture is sparse: a piano, a sofa, a table, a chair, a lamp and buckets of flowers, randomly placed.

The actors make their entrances and exits from the stalls. When they are on stage they are not always in the play. The acting is often highly artificial.

Ruth Wilson’s thoroughly unpleasant Hedda, headstrong, cruel, vicious, deeply lonely and deeply unhappy, expresses her frustration by hurling the flowers all over the stage and stapling some to the walls. She is dressed throughout in a silk chemise

The other characters have been completely rethought. Kyle Soller is a very young and boyish Tesman. Chukwudi Iwuji’s Lovborg is no Bohemian with vine leaves in his hair.

Kate Duchene’s Aunt Julian is not a sweet old lady. Eva Magyar’s Berte, the maid, just sits there at the side of the stage, like a prison warden.

Rafe Spall’s Judge Brack, also much younger than usual, is a blackmailing thug who threatens Hedda with scandal, shame and humiliation and gives a disgusting demonstration of how he intends to treat her in the future. Not surprisingly, Hedda decides to shoot herself.