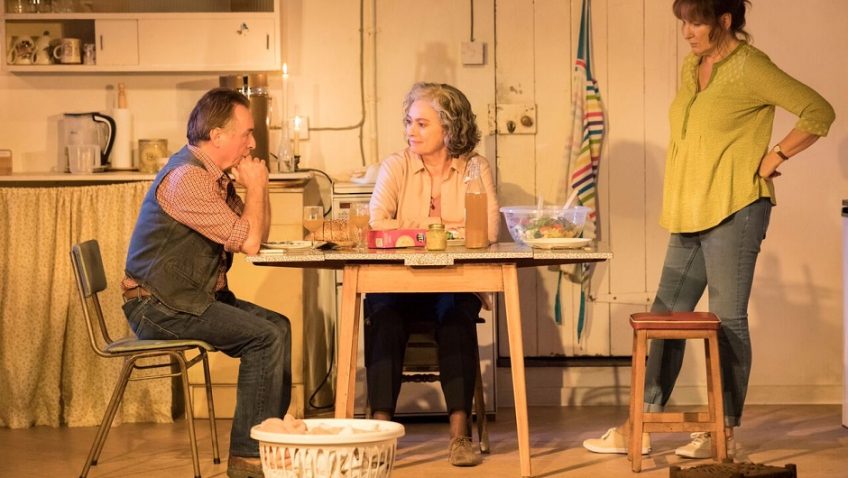 Lucy Kirkwood had a big success with her last play, the epic Chimerica, which won the Olivier, the Evening Standard and the Critics’ Circle Best New Play Award.

The Children is much more intimate. There are just three characters, all in their sixties. Robin, Hazel and Rose are retired nuclear scientists.

The action takes place in a cottage on the East Coast not far from a nuclear power station.

Robin and Hazel are married.  Rose, whom they have not seen in 38 years, arrives out of the blue with a proposal.

Has Rose come to steal Robin? Rose and Robin had an affair many years ago. Would she really like to see Hazel dead?  Would Rose really want to put Hazel in a situation where she would die slowly?

An earthquake has damaged the power station. The plant has to be made safe. The contamination has to be cleaned up. The question the play raises is who should be risking their lives doing this?

The effects of the radiation could take 20 years, by which time they would be dead anyway.

The argument is that Robin, Hazel and Rose already have had a long and full life and that they should be expected to sacrifice their lives for the younger generation.

It’s not such a big deal. People in the past used to die much younger than they do today.  Life expectancy in Britain in 1900 was about 47 for men and 50 for women.

So what should they do?  What would you do? What is our moral responsibility to our children?