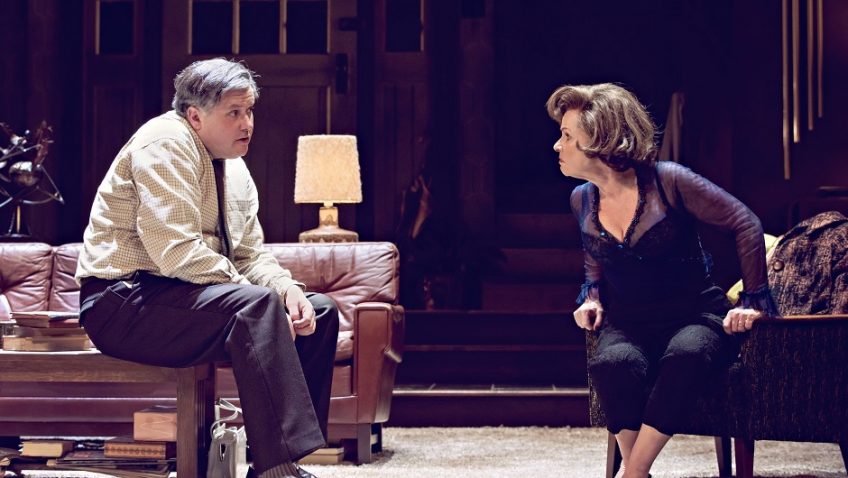 Edward Albee died last September. James Macdonald’s revival of Edward Albee’s masterpiece with excellent performances by Imelda Staunton and Conleth Hill is as fine a tribute to him as Albee aficionados could wish.

Who’s Afraid of Virginia Woolf? is one of the great American plays of the 20th century and it should have won the Pulitzer Prize for Best Drama in 1962; but it was denied the trophy on the grounds that it was “a filthy play”.

George and Martha have been married for 23 years. He is an unsuccessful history lecturer at a New England university and she is the daughter of the Dean.There is no limit to their sado­masochism and the in-fighting is as witty as it is vicious and vulgar.  Yet underneath the compulsive cut-and-thrust the actors reveal two deeply unhappy and vulnerable people, chronically dependent on each other, living out sad fantasies.

George and Martha’s dance of death is another liquor-ridden long night’s journey into day and as painful to watch as anything by August Strindberg and Eugene O’Neill. It is a rough night, a vocal and emotional marathon, gruelling for the actors; and gruelling for the audience too.

Masters in the art of self‑defence, they play their brutal games up to the hilt; and then having hacked themselves to pieces, they turn on their guests, an ambitious smug young biologist, ready to hump his way to the top of the university ladder, and his mousey wife whom he married for her money.

Conleth Hill might be mistaken for a punch-bag; but in his quieter way he is lethal and lands the knock-out punch. There are admirable performances too, from Luke Treadaway and Imogen Poots as the humiliated guests.