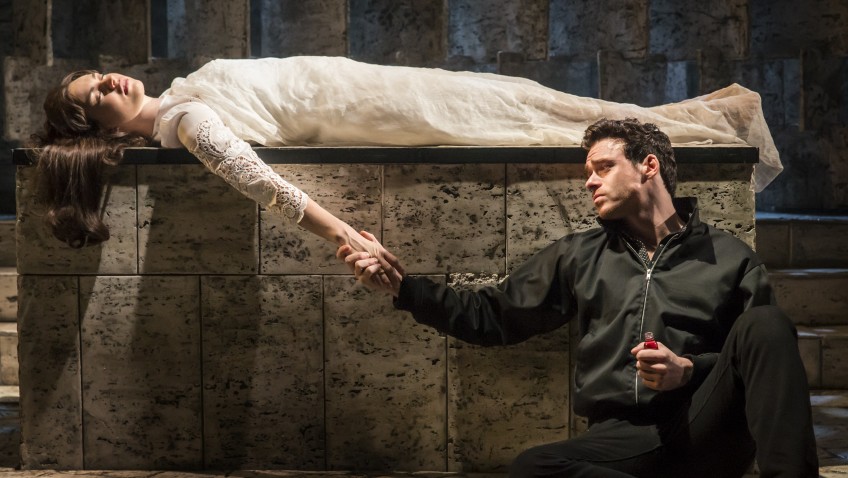 The last time Richard Madden and Lily James acted together was when she played Cinderella and he played the Prince in Kenneth Branagh’s Cinderella film.

Branagh now casts them as the star- cross’d lovers. Madden is not a natural Romeo and James is no vulnerable 13-year-old. She puts Paris firmly in his place. Paris is very lucky he did not marry her.

There’s no chemistry between Madden and James; and the tragedy is not as tragic as it ought to be. The actors are also not totally at ease with Shakespeare’s verse and much of what they say is just a lot of words.

Cinderella, you may remember, only lost her little glass slipper at the ball. Juliet loses her virginity and her life. 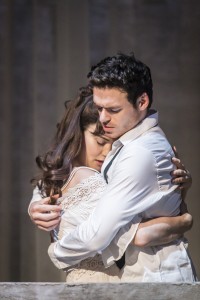 Rob Ashford and Branagh direct the play and set it in a 1950s Federico Fellini Verona. The cast occasionally throw in the odd Italian phrase which always jars because you then start wondering why they aren’t speaking Italian all the time.

Juliet sings a cabaret song at Capulet’s party and she swigs too much champagne from the bottle and gets a teeny-weeny bit sozzled in the balcony scene. Only, surprise, surprise, designer Christoper Oram’s has not included a balcony in the set; or rather the balcony is on the ground floor, which is not the same thing and robs the love scene of its iconic romantic image.

Romeo and Juliet without a balcony is like The Titanic without an iceberg.

It has often been said that Shakespeare killed off Mercutio because he saw the longer he allowed him to remain on stage, the more he would upstage Romeo.

Derek Jacobi is unexpectedly cast as Mercutio; and the result is that Mercutio is no longer Shakespeare’s Renaissance man doomed to die young.

What, you may ask, is a louche, sashaying 77-year-old, a “boom boom” effete, doing hanging out with Romeo and Benvolio? Your guess is as good as mine. I am not surprised that Tybalt accuses him of consorting though there is absolutely nothing on stage to confirm it. 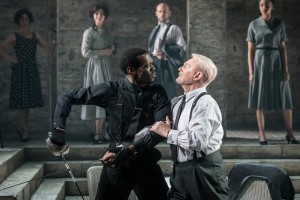 The jibe, nevertheless, strikes home and Mercutio, stupidly showing off, tries to humiliate Tybalt. There is no swordfight as such. His death is an accident caused by Romeo trying to stop them being silly and coming between them.

Mercutio’s bitter reaction to his fatal wounding brings out the best in Jacobi and is the high spot of his performance.

Samuel Valentine’s Friar Laurence is exceptionally young; just out of the seminary and matey with Romeo. Chris Porter’s Capulet is quite mad; and psychotic with it.

At the end of the play Montague says he is going to build a statue of Juliet in solid gold. I do hope it is better than the one they already have in Verona. Something in marble on the lines of Auguste Rodin’s “Kiss” would be much better.