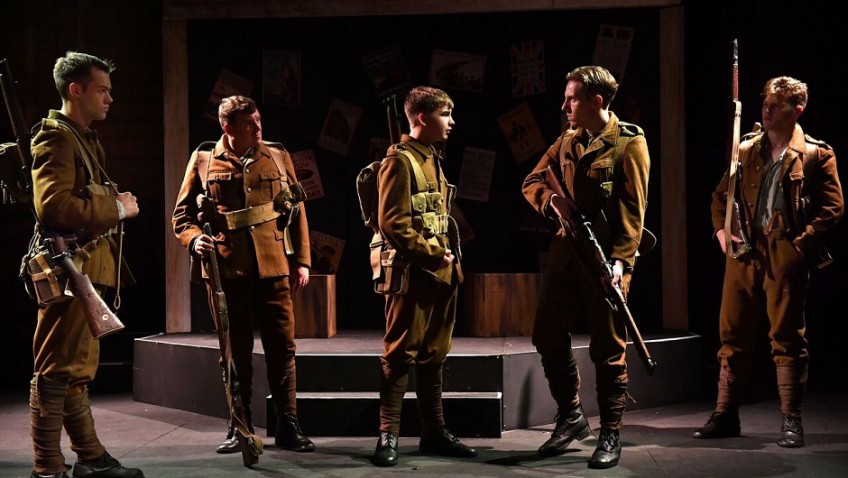 His book, They Took The Lead, tells how the East London football club, Leyton Orient, then known as Clapton Orient, was the first team to sign up its players, staff and supporters to fight.

Michael Head has now adapted the book for the stage and given himself a nice comedy role, the butt of everybody else.

First of all there is the beautiful game, football, and then there is the greater game, war and dying for king and country.

Tilly Vosburgh’s production has the blessing and support of The Royal British Legion and The Professional Footballers Association.

The project, a tribute to the men who fought and died in the Great War, is worthy and the performance is sincere. But what we see at Southwark is not a play but a series of tiny scenes.

These scenes and the reading of letters could be the basis for a film script or a TV docudrama.

The most arresting episode is when a British major shoots a wounded German prisoner rather than take him to hospital. The men under his command, humane and decent, are appalled.

Another potentially interesting scene is a meeting between two dead soldiers, the best of friends, but it is not developed.

The ensemble cast, who look as if they might be footballers and soldiers, is fine, though something needs urgently to be done about the diction.

The Greater Game is also too long and needs cutting. It should, however, have a special appeal for Leyton Orient, its players, staff and fans; and, hopefully, it will bring a new audience to Southwark Playhouse.

The major problem, however, for many regular theatregoers will be the feeling they have seen it all before. The production doesn’t add anything new and especially for those who have seen All Quiet on the Western Front and Paths of Glory on film and Journey’s End and Oh! What A Lovely War on stage.