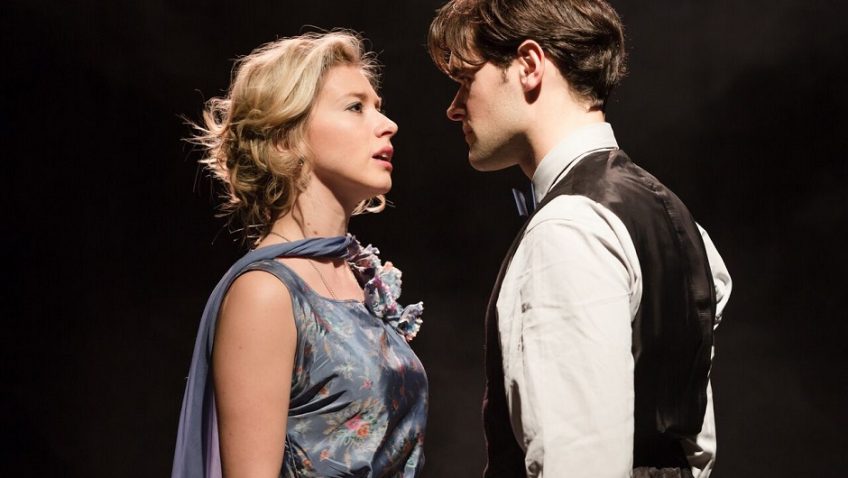 The total number of military and civilian deaths in World War 1 was 38 million. The 1918 influenza pandemic took another 50 million.

A great number of people in the early 1920’s would have felt Death really should take a holiday.

The play had a New York production in 1929. There was a film with Frederic March in 1934 and another film in 1998 with Brad Pitt, called Meet Joe Black. Maury Yeston’s chamber musical, with a book by Thomas Meehan and Peter Stone, opened in New York in 2011. Yeston is best known as the author of Titanic and Nine.

Thom Southerland’s production, simply and attractively designed by Morgan Large, is its London premiere. Southerland has directed Titanic, Grand Hotel and Ragtime. His directorial flair and expertise are much in evidence

Death Takes A Holiday is always on the cusp of being a great musical.

The Grim Reaper, having just killed Grazia, a young woman in a car crash, changes his mind and decides to have a fling with her instead. Death (Chris Peluso) decides to stop scything and take a three day break.

He turns up at her father’s villa on Lake Gardo in Northern Italy in handsome human form and passes himself off as a Russian Duke. Grazia (Zoe Doano) is already engaged but that doesn’t stop him.

Will he carry her off with him when he leaves? Why not? Strictly speaking she is already dead. “I love you more than life itself,” she says.

Death has been played memorably on film by Maria Cesares in Jean Cocteau’s Orpheus and by Max von Sydow in Ingmar Bergman’s The Seventh Seal. Is Death always tragic? Brad Pitt was in a lighter, more comic and much prettier key.

Peluso’s Death can be sinister, dark, threatening and drop-dead romantic. The music soars operatically, especially when he and Doano sing “More and More”.