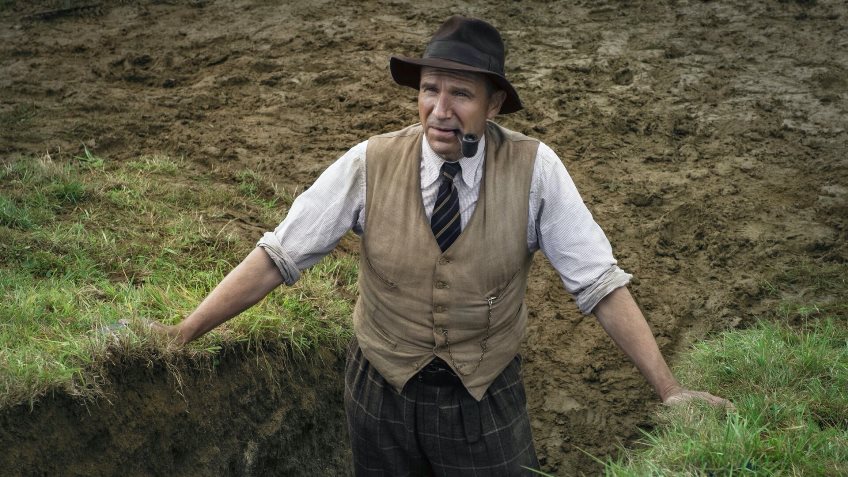 THE DIG (Netflix). World War II is about to break out. Mrs Edith Pretty, a rich landowner, invites Basil Brown, the local excavator to excavate the mounds on her property in Sutton Ho in Suffolk. He discovers an Anglo-Saxon burial ship loaded with treasure, one of the great finds in history, which she gifts to the British Museum who treat Brown badly and give him no credit during his lifetime. The upper/lower class relationship between Mrs Pretty and Brown is beautifully understated by Carry Mulligan and Ralph Fiennes. The latter looks remarkable like Brown; but he is off the screen for far too long whilst the script occupies itself with a love affair of a fictional couple, a sop to audiences who wouldn’t be watching this sensitive film anyway. Simon Stone directs.

TOO CLOSE (Acorn) is a psychological drama for adults based on a novel by Clara Salaman. There are sexual and mental health problems. Life is a messy business: marriage, lovers, screaming babies, Alzheimer’s, depression and other daily stresses, and having to take pills to go to sleep and take pills to stay awake. A woman drives her car into the river. There are two children in the back seat. The forensic psychiatrist (Emily Watson), who questions the woman (Denise Gough), who faces prison and psychiatric hospital, has major issues of her own and is in need of help, too. The director is Susan Tully. The actors are excellent.

MEET JOE BLACK (YouTube). Death takes a holiday and appropriates the body of a beautiful young man (Brad Pitt) who died in a road accident and hangs around with a 65-year-old billionaire tycoon (Anthony Hopkins), whose time is running out. He falls in love with his lovely daughter (Claire Fortani) This much-underrated romantic fantasy (released in 1998) has considerable charm and humour. The Grim Reaper has never been less grim, nor so beautiful. Pitt joins the ranks of Max von Sydow and Maria Cesares, as a totally original image of Death.

THE MERRY WIDOW (YouTube). How do you film the most famous operetta in the world in the silent era? Erich von Stroheim in 1925 simply ditched Frantz Lehar and told a story of how the merry widow (Mae Murray) became the merry widow and concentrated on her relationship with two rivals, Prince Danilo (John Gilbert) and his cousin, Prince Marko (Roy D’Arcy), heir to the throne. Marko, with his monocle, his sneer, his sadism, makes for a splendid villain. Tully Marsh is cast as the ugly, crippled, perverted billionaire baron. All the men, even the hero, are lechers and treat women as sex objects. Stroheim offers caustic satire on sordid society, which is absolutely fine. But if you want Lehar’s music, frothy comedy, songs and waltzes, let me suggest you watch the delightful 1996 New York City Opera’s production, which can be seen for free online.