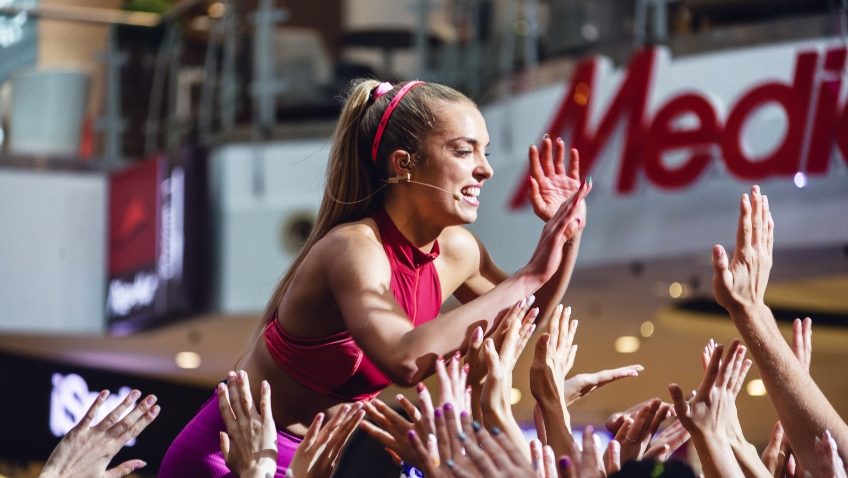 An Instagram fitness motivator realises not all followers are welcome in this engrossing Warsaw set film.

Sweat follows the busy, but unfulfilled life of successful 30-year-old fitness motivator Sylwia Zajac (Magdalena Kolesnik) as she prepares for her big break: an interview and wake up exercise class on a popular television show. But when this woman, who makes a living out of being watched, is watched by a stalker, her reaction forces her to look in the mirror.

Swedish writer-director Magnus von Horn’s (The Here After) engrossing second film may be set in Warsaw, his adopted home, but it could be anywhere. In Sweat, the story of an Instagram celebrity on the verge of a nervous breakdown, is universal.

In a rousing opening scene, slim, beautiful, and immaculately turned out Sylwia with her pink tights and bouncy, blond ponytail leads a class of hundreds of fans in a live exercise class in a shopping mall. She is like a high-energy rock star on tour, dazzling her fans and lapping up the spotlight. The touring does not sell records, but her body. Advertisers value her 600,000 devoted Instagram followers and her life depends on giving them access to that body.

You can tell Sylwia believes in what she does, particularly when she circulates amongst the predominately female participants, shouting ‘work with the body you have, not the body you want’ and encouraging them that a perfect body takes a lot of work. Sylwia practises what she preaches. Keeping her body in shape is a combination of gruelling, daily gym workouts, early nights, no alcohol and a diet of health food that is a borderline eating disorder.

With a handheld camera struggling to capture the squats and push ups you feel like you are there, and glad you are not, in what seems like a send-up of the fitness motivating culture and Instagram obsession that reached a pinnacle in lockdown. The selfies with adoring fans at the end of the work out are the real reason for attending. This is a rare chance to see their idol in person.

Von Horn takes us through three days in the life of this hard-working, self-employed, self-obsessed woman. She unwraps sponsors’ gifts, making quick comments on Instagram, makes health shakes casually giving the recipe, and takes her adorable dog Jackson for a walk. Sylwia’s life is orderly, even regimented, and never private, as her accessibility to fans via Instagram is the basis of her livelihood – and, more problematic, of her identity.

But has she gone too far in sharing her honest emotions? Her agent informs her that advertisers have the jitters after a recent, spontaneous confession of loneliness and the desire for a boyfriend, went viral. Even her T.V. booking is in jeopardy.

In the first scene, you expect the dark side of Sylwia’s life will be an inability to perform. When she asks her fitness partner, Klaudiusz (Julian Świeżewski) to massage a painful shoulder muscle, you begin to think of all sorts of medical issues – with the ensuing sentimentality of some terrible diagnosis. Not so, as it is Sylwia’s mental state that gives the film the atmosphere of a thriller, as she invites a surprised Klaudiusz home with her on the eve of the T.V. show. That this plot twist promises more than it delivers is perhaps a weakness, but Sweat is a character study, not a thriller.

If Klaudiusz, who is clearly attracted to her, is intrigued by his work partner’s invitation, so are we. Does she want ego-bolstering on the eve of her big broadcast, intimacy, physical love or protection or all of these? If even Sylwia is not sure, Klaudiusz quickly realises that he is not the centre of her attention as she remains focused on the white car downstairs.

Von Horn’s challenge is to turn this self-obsessed machine – whom he modelled after a real person – into a likeable, real individual. This he does with subtle touches, such as her sincere conversation with a health food sponsor over the plastic containers that she rules unacceptable, and a moving shot of Sylwia mechanically eating her breakfast out of a box, standing up by the window as the sun rises on the big day of her television appearance.

On the other hand, when Sylwia buys her mother, Basia (Aleksandra Konieczna) a television too big for her flat, flowers and a copy of a fitness magazine with Sylwia on the cover for her birthday, we sense the tension between mother and daughter. When the attention turns to Basia, who has found happiness with a new boyfriend, and other relatives who are celebrating a pregnancy and talking about children, Sylwia struggles pathetically to keep the conversation focused on herself.

Kolesnik’s performance is so nuanced that you can feel her mind of conflicted emotions at work as she disengages from the conversation among people who might as well be strangers, eating forbidden cake and drinking champagne. When Sylwia sulks away to a bedroom to eat the bland health food meal she has packed, however, her vulnerability and loneliness emerge. She is an expert manipulator of her image but what can she do when people refuse to see it?

Von Horn’s film is not the definitive film on the Instagram culture, and his attempt to get under the skin of one such celebrity succeeds more for Kolesnik’s magnetic performance than for the script that, for all its merits, lacks an emotional punch.