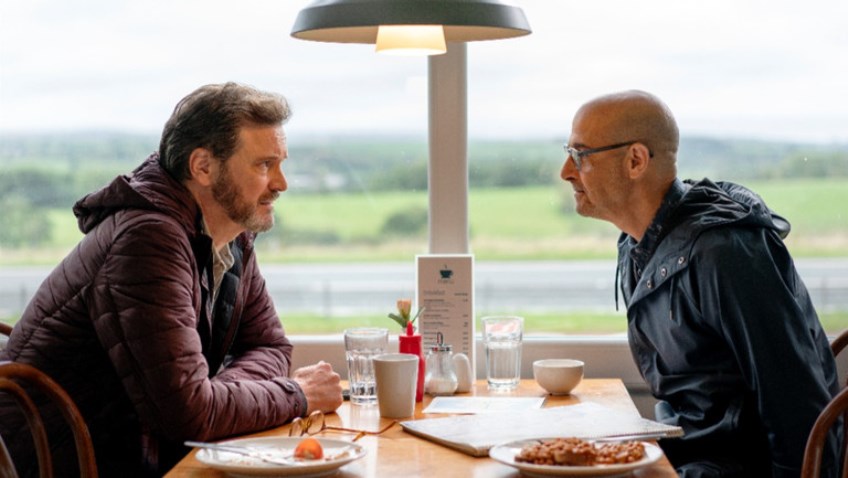 Films about dementia are increasing along with our awareness of this dreaded disease and its presence in the lives of filmmakers. Thirty-seven-year-old British actor-turned writer-director Harry Macqueen’s beautifully judged chamber piece, Supernova, was inspired by his encounter with early onset dementia on three occasions in 2015 and subsequently informed by extensive research with charities such as the Dementia Research Centre at University College London. Just after making his feature debut (Hinterland), in 2015, Macqueen witnessed a work colleague turning from a friendly jovial, middle-aged woman who was good at her job into an erratic and angry person who was sacked for doing a bad job. Six months later she was diagnosed with early onset dementia and a year later she was dead.

Transforming this knowledge and life experience into a dramatic fictional film is not a given. You need a talented writer-director and perfect casting for what is in fact, a two-hander. Controversially and courageously Macqueen chose two well-known, straight actors to portray his same-sex couple, but he chose two of the best in the business who deliver respectful, nuanced, and heartfelt performances.

There is no conventional plot in this road movie in which the road is as metaphorical as the title. Successful novelist and amateur astronomer Tusker (Stanley Tucci, Spotlight, The Children Act), concert pianist Sam (Colin Firth, A Single Man) and their cute dog, are holidaying in Cumbria, headed towards the devastating explosion of a dying star.

‘How about exploring the outer regions of 5th gear,’ back-seat camper-van driver Tusker jibes as Sam sheepishly says, ‘it felt like second.’ Tusker, who was diagnosed with early on-set dementia three years earlier, is struggling to read the map when he objects to the Sat-Nav because the woman’s voice reminds him of school.

Wisely, Macqueen and these two actors with a track record in comedy (Julie and Julia, Bridget Jones’ Diary respectively) inject enough humour into the journey to balance the grim subject matter. An occasional political reference both date the men and tell you – as do in part their professions – about their liberal views. Again, railing against the Sat-Nav, Tusker complains that the voice sounds like Thatcher. ‘First it’s Section 28, and now she’s going to tell us where to go on our holiday.’

The couple bursts into song along to Donovan’s Catch the Wind, laughing at some intimate memory. Everything about these tender, late-middle-aged men tells you they have been best friends and lovers for so long that they cannot imagine life apart.

The holiday in the Lake District is supposed to be a spontaneous nostalgia trip to romantic haunts from happier times, and for a while it seems to be. When asked if he had one wish, what would it be, Sam says, ‘I wish this holiday wouldn’t end.’ Tusker answers, ‘I wish I didn’t have this bloody thing.’ A few days later, it is Sam who suggests ending the trip to return to a more familiar, calm setting.

For close as they are, Tusker has kept some secrets from Sam to protect him, and out of love. Aware that Sam has put his musical career on hold to care for him, Tusker has been using his last lucid months to plan his own future and liberate his partner. But first, he has arranged a birthday celebration at Sam’s sister’s mountain retreat, where all their friends have gathered.

Tusker’s plan to read a farewell speech and tribute to Sam ends in humiliating failure, and, in the only mawkish scene in the film, Sam must take over, struggling through what is in essence a self-tribute, fighting tears.

When they leave the happy house in Cumbria, the tone of the film turns darker, but never loses its hold or its credibility. After a dinner that Sam cooks and Tusker cannot eat, Sam encourages Tusker to work on his new book, only later discovering in his notebook unfinished sentences and blank pages. Sam is both shocked at this evidence that the famous writer can no longer write, and at the realisation that he had not known.

Sam is eager to discuss the practicalities of life when they get home, but Tusker has no plans to return. He has left his medication at home. ‘We both know they weren’t doing any good,’ he tells Sam, who pleads, ‘we have to try.’

If there is a criticism, aside from the speech scene, it is that you might wish that the two men’s professions were not so artsy and clichéd. Wordsmiths who suffer from dementia might be the hardest hit, but the disease puts an end to all careers.

This is a minor quibble by the end of the film when we are alone with two men contemplating and debating the nature of love. Tucci is completely convincing – noble and heartbreaking – as Tusker. But it is Firth who reveals untapped expressions of quiet despair and emotion in his greatest performance since A Single Man. This intense love story is about who has the stronger claim to love and what that love means when one of a couple will be left behind. It is an act of courage to die prematurely with dignity but an equal act of courage to let go and face life alone.

You can read our review of Spotlight by clicking here.

You can read our review of Julia and Julia by clicking here.