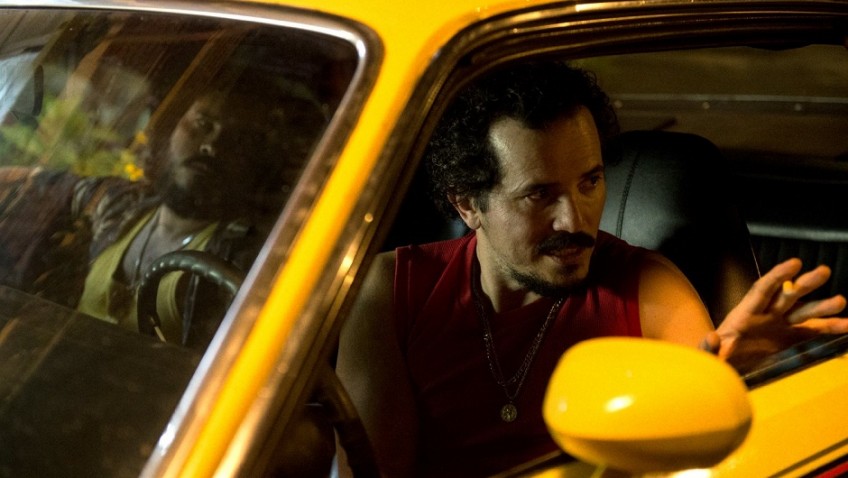 It’s a perilous, nerve-fraying job, but somebody’s got to do it, and, after seeing Brad Furman’s (The Lincoln Lawyer) The Infiltrator you will be glad that that somebody isn’t you. The eponymous hero is US Customs and Drug Enforcement Agent Bob Mazur and you will be equally glad that the actor chosen to tell his story is 60-year-old Bryan Cranston. After his portrayal last year of Dalton Trumbo, the blacklisted scriptwriter of ‘Roman Holiday,’

Cranston gives another convincing, multi-textured performance as the man credited with bringing down the money-laundering BCCI (Band of Credit and Commerce International) and busting a network of Pablo Escobar’s associates.

Based on Mazur’s book, The Infiltrator: MY Secret Life Inside the Dirty Banks Behind Pablo Escobar’s Medellin Cartel, the film is astonishingly authentic – although sometimes it’s hard to believe it. This is undercover work that defies the imagination.

Bob Mazur (Cranston) knows the stats: fifteen tons a week – $400 million in drugs are smuggled into Florida by the Medellin Cartel every week. Cut away from the danger, the sleaze, the lies and the drugs to Mazur’s modest suburban home which he shares with his wife Evelyn (an exacting performance from Juliet Aubray) and their two children.

When a man named Emir (a superb supporting role from John Leguizamo) pops up at the back door to talk about paying a new informant, Mazur is furious at the intrusion into his family life. Abreu, a seasoned Puerto Rican agent, comes across as a low-life that you wouldn’t trust with a cat, but his fluency in Spanish is essential and his slacker act hides acute street smarts and nerves of steel. Normally his people-reading skills are top notch, but when Mazur raises doubts about a new informant, we are correctly put on the alert.

Recognising the futility of busting a never-ending stream of small-fry felons, in 1986 Mazur makes a decision that will, if not bring down Escobar, make his obscenely profitable business a lot more difficult. Mazur decides he will follow the money to the very top and mounts what will be a five-year sting operation to do so.

It is fascinating watching Mazur put together an alias: from finding the grave of one Bob Musella, roughly Mazur’s age, to his thin disguise and new office. It would have been interesting to learn more of the details of this charade, including how Mazur learned the business, but the film is just over two-hours already. Bob Musella’s Unique Selling Point is a portfolio of legitimate businesses through which he can launder larger streams of drug money without raising any suspicion. When we see Musella meeting with ‘respectable bankers’ from BCCI (Art Malik plays Akbar Bilgrami, head of the bank’s Latin American division) telling them he represents a group of Columbian businessmen who want to invest in Florida real estate, everyone knows what he is talking about.

You know from watching Cranston’s Mazur-Musella that one of the secrets of his success was his polite but firm language and his inherent old-school decency. After a night out to celebrate a deal, Abreu chides his boss for not accepting a Columbian drug king’s gift of a prostitute and, as a lame excuse, making up a fiancée. ‘I don’t even know why you’re doing this, ‘Abreu emotes in frustration, ‘I heard about the retirement package they offered you.’ Abreu needn’t worry. While there is the expense and added complexity of coming up with a fiancée (Diane Kruger plays Kathy Etrz, an agent who had never gone under cover before), it turns out to be a tactical coup. The convincing couple become fast friends with the Robert Alcaino (a chilling performance from Benjamin Bratt), Escobar’s right hand man and his wife (Elena Anaya). The engagement also provides Mazur with a convenient setting on which to close the sting operation as bankers and drug dealers fly in from all over the world for the wedding.

One of the pleasures of the film, written by Ellen Brown Furman, is watching the Cranston portray Mazur who in turn portrays Musella – for undercover agents have to be actors. In one chilling scene in a restaurant, his acting frightens Evelyn watches her mild-mannered husband assault an innocent waiter over an anniversary cake that could have blown his cover.

There are not as many of these memorable scenes as you might want, though, for those tense moments seem to get lost in the logistics, the confusing location hopping and the continual challenge of trying to assimilate all the characters and names of the players Mazur has to meet to get to the top. Drug dealer-turned informant Barry Seal (Michael Paré) is assassinated before we even learn who he is and why we should care.

There is one odd, but excruciatingly tense scene when Bob’s clearance means being tested by a mad voodoo doctor. Forced onto his knees he witnesses a man next to him being shot in the head on the spot after failing the test. And while you just know that at some point the briefcase containing Mazur’s hidden tape recorder will pop open (as in real life), when it happens your heart still misses a beat.

What is never explained is why, given Mazur’s elaborate and costly alias, he returns home to his family where he could be followed by any of the cartels he deals with. While we see Mazur in his office and in hotel rooms, we never see him living in his lavish mansions. Moreover no one seems overly worried by the fact that, since the disguises are not very physical, – at least not in the film – Mazur, Abreu and Kathy Etrz will be on hit lists for the rest of their lives.

Brian Cranston, who has been unknowingly auditioning for this role in the television series Breaking Bad, is perfect casting here, too, as a family man and shrewd businessman who even Pablo Escobar would trust with his laundering. It’s a shame, though, that the film never really gets inside the man, showing the personal cost of playing a role where death is not something you rehearse.