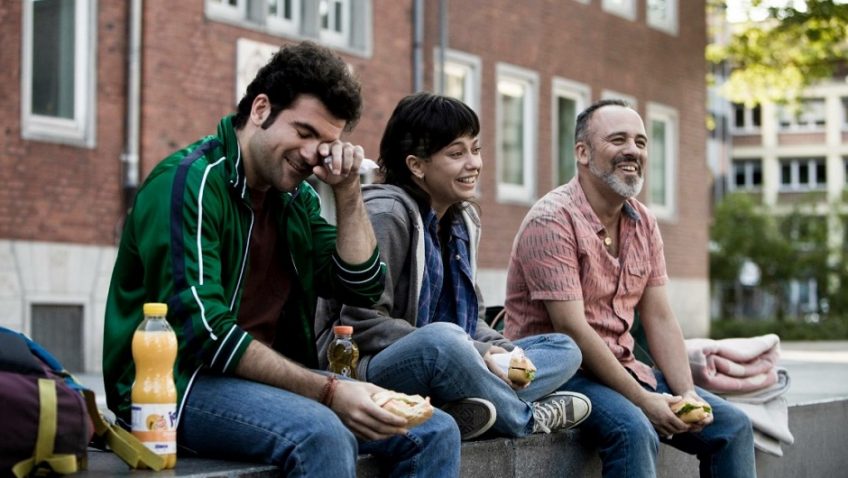 A heartfelt story pits a local Spanish community against globalisation.

Spanish Director Icíar Bollaín and British scriptwriter Paul Laverty (Ken Loach’s regular writer) teamed up to acclaim in 2011 with their first collaboration, Even the Rain.  If this second joint venture is not of the same calibre, the filmmakers’ portrayal of the dying local economy in the face of globalisation is heartfelt, and the mix of professional and untrained actors adds to the natural spontaneity that actress Anna Castillo brings to the film.

The free-spirited Alba (Castillo) has a rebellious nature, and she spices up the drudgery of toiling on her family’s poultry farm with a prank call to her uncle Arti at the local pub where the clientele is unemployed.  The economy has forced the family, now headed by Arti and Alma’s father Luis (Miguel Angel Aladren) to sell grandfather Ramón’s (local man Manuel Cucala) olive grove without consulting him. Ramón has not spoken since and Alma, who adores her grandfather, is heartbroken. It is not only the economy, however, as Arti has made some bad decisions.  Their seaside restaurant venture went bankrupt and they are struggling with the battery chicken farming.  The opening scenes, in which Alma walks through thousands of hens squeezed together like sardines, nonchalantly picking out those that have dropped dead, are enough to put you off chicken forever.

Away from the din of anguished chicks, separated from their mothers and farmed separately, is the quiet grove, where, in flashbacks we see young Alma playing as a child with her beloved grandfather.  Alma imagines a person’s face in the gnarled roots of a 2,000-year-old tree that Ramón speculates was planted by the Romans.  In another flashback, young Alma crawls into the tree’s branches – as though running to a mother’s loving arms – to protect it when the bulldozer arrives.

When grandfather Ramón refuses to eat, Alma launches a half-baked plan to bring back the tree before her grandfather dies.  Alma has a big problem, however.   The tree is the centre-piece in the heavily guarded lobby of the large German energy company that purchased it for their Düsseldorf headquarters.  She fools Arti, a truck driver by profession, and farmhand and secret admirer Rafa (Pep Ambròs), into accompanying her on what becomes a road trip of bonding. This quixotic story plays like a fable and in that respect, wears its moral and its heart a bit too prominently on its sleeve.  In addition to the Roman oil tree prostituted into the service of an earth-destroying energy company as its ironic logo, we have the symbolism of the replica Statue of Liberty that the disillusioned Arti collects along the way at the home of a wealthy man who still owes him money.  The statute would presumably be sitting next to the huge tree on the pick-up if the plan works: a heavy handed image for an overloaded truck.

Still, there is something genuinely poetic in the image of the tree and Ramón representing not only old age, but the core values that go along with a life that is in tune with the cycle of nature.  Ramón’s solidarity with the tree in his shrivelled appearance, and the disintegration of the bickering family representing the divided nation is reminiscent of Victor Erice’s The Spirit of the Beehive. The enemy was Franco’s fascism in Erice’s 1973 masterpiece; here it is globalisation and the big land grab.  While it is all too easy to root for the local community in this David and Goliath battle, it is less obvious what we are meant to think of the chicken farm.  How can a young woman with so much compassion for her land and Mother Nature be so impervious to the reality of her job and her family business?