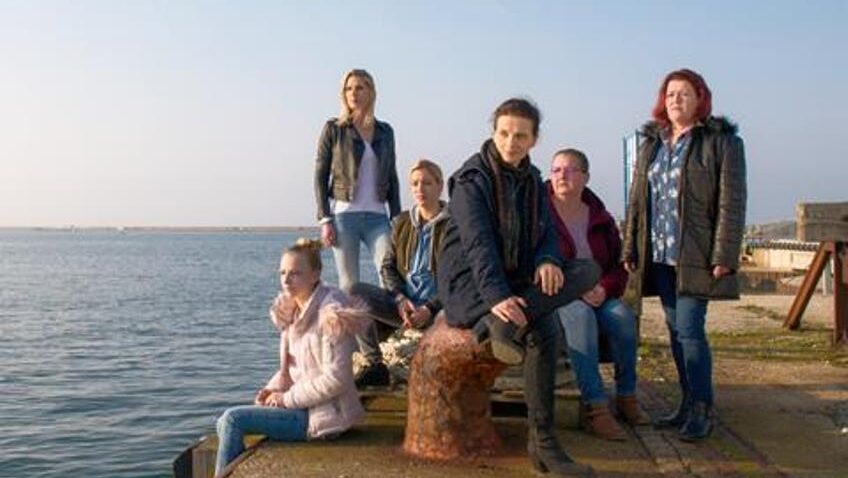 Juliette Binoche stars in this worthy endeavour, but Emmanuel Carrère is no match for Paul Laverty and Ken Loach.

While watching The English Patient back in 1996, the world knew that Juliette Binoche was a great beauty. Since 2013, when she appeared in Camille Claudel, 1915 there was no doubt she was a great actress. But Between Two Worlds isn’t the first time she has devoted her talents to a misguided venture that might have sounded good on paper. Based on the book by French journalist Florence Aubenas, in this unsubtly entitled film, writer-director Emmanuel Carrère explores the world of zero-contract hours work to enlighten and perhaps shame the bourgeoisie and politicians. It’s a worthy endeavour, but he’s not the French answer to Paul Laverty and Ken Loach.

We are in Caen, the busy port in Normandy where transportation from boats, trains and cars, and industrialisation, represented by concrete, traffic and shipping, set the scene. An attractive middle-aged woman has an appointment for a job interview, and of course, is asked what she has been doing for the past 23 years. ‘I was married and had kids,’ Marianne Winckler (Binoche) says, not really trying to sell herself, as the earnest civil servant facing her suggests.

In fact, Winckler is really a Parisian Journalist whose homelife is vague in the film but does not appear to include children. The civil servant suggests she try working as a cleaning lady. At the job centre she meets fellow job seeker Cedric (Didier Pupin) and surprisingly goes to this stranger’s modest flat, conveniently located next door, for some lunch.

She tells Cedric the cover story she is to tell her co-workers. She knows no one in Caen having cut off her comfortable life in Paris after her husband betrayed her and left town for some reason. At times, she thinks it is exciting existing only for herself.

The morality of Marianne’s investigation is explored in a scene in which her honesty is met with the rebuke that “the people who come here can’t stop when they’re bored.” Marianne will not be taking a job from someone as she will stop as soon as she is offered a full term contract. The deception of her colleagues is another matter, and the different reactions to her post book publishing exposure is well dramatised.

Until then, and for most of the film we see Marianne trying to master the training involved in cleaning toilets or being a chamber maid on a ferry in zero term contract jobs. She learns first-hand how exhausting and soul-destroying the back-breaking routine is. But the big difference is that she knows it is short term and that the resultant book should make money.

Most of the people her age are supervisors, so she hangs out with girls in their late teens and twenties, some of whom work two jobs in long shifts running from one to another in public transportation. Her co-workers include a wide array of mainly women (“men don’t clean toilets” we hear) whom Marianne befriends. But the core of the film is her growing friendship with a sullen, truculent and guarded single mother, Chrystèle (Hélène Lambert).

The tension in the film lies in that relationship, as Chrystèle might not be educated, but she has street smarts and survivor instincts. She senses there’s something fishy about Marianne and her story, and we keep waiting for the moment when Chrystèle will discover what that is.

About halfway, when Chrystèle rummages through Marianne’s bag and examines her ID, we think the game is over, but Chrystèle just wants to know her new friend’s birthday and gives her a necklace and a modest celebration with her children.

Chrystèle, who has a chronic cough but cannot afford to miss a day’s work, works two jobs, the first being from 6 – 11:30 at the port. As she has a long walk there, Marianne offers to give her a lift and gets herself employed as one of the cleaners on the overnight ferry. The job is minimum wage, and you’re sacked if you are late. There are 230 rooms, which gives each cleaner 4 minutes a room – including changing the bed linen. Marianne struggles to keep up.

There are moments of leisure. Marianne goes bowling with Cedric and the girls, and she plays on the beach with Chrystèle’s children. There’s even a leaving do on the ferry when a glamorous super-cleaner (Émily Madeleine) – who has such long legs she could be a Vogue Model – leaves for a better future.

But you wonder what Marianne is feeling during these moments when she is engaged in recreation and social circles that are not her own. The scene in which Marianne cuddles up on a bed in the ferry with Chrystèle and another worker like boarding schoolgirls is downright creepy, as Marianne is twice their age.

To his credit, Carrère does not embellish. No one is whipped, but there are disgusting toilets and vindictive supervisors. The sets are very real; the problem is that there’s no emotional veracity to the drama. Just as we cannot believe Marianne, so it is hard to believe anyone else, except in an intellectual way because we know such people exist.

And therein lies the rub. We know this gap in Capitalistic societies (and Communist Societies, as it happened) exist. Specifically, TV programmes and news discussions on zero hour contracts flooded our television screens before covid, and of course, Loach’s Oscar wining I, Daniel Blake and his last film, Sorry, I Missed You put insecure work, the indignity of the job market, and the gap between the working class and everyone else on centre stage.

Of course, the social imperative is such that the market can accommodate many more films on the topic, but Between Two Worlds, though remarkably accurate, has nothing new to offer. Perhaps because Marianne is an outsider looking in, it never feels urgent or touches an emotional chord the way Sorry, I Missed You did.