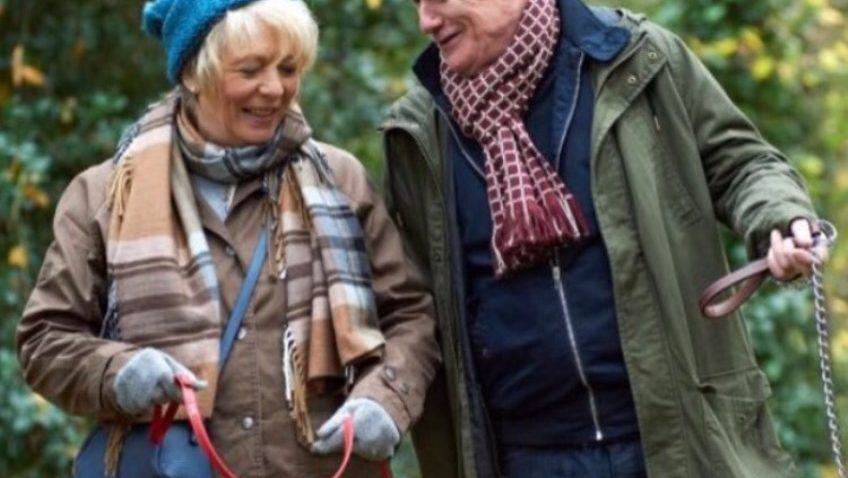 Over the lockdown, the UK took to walking more than ever, and for many, the daily walk was the highlight of an otherwise lonely, sedentary and claustrophobic day. There must surely have been a few relationships formed amongst dog walkers who tend to see each other over and again. Paul Morrison’s gentle, romantic drama was made before the pandemic, but it does feature a couple of over 60’s dogwalkers, whose dogs bond only a little faster than their lonely owners.

Fern (Alison Steadman) owns a yapping, little male dog and Dave (Dave Johns), a loveable, female German Shepherd, both of which enjoy the green expanses of parks of London and Hertfordshire where the film was shot. Fern lives in a comfortable, family house that she is about to lose when it is sold as part of a divorce settlement. Dave lives in a roomy council house which he is about to lose because, with his wife in a care home, he is now living alone and there is a long waiting list.

Wouldn’t it be nice if they could get together in one pleasant, cosy house with their doggies? Of course, but first we are treated to the usual ups and downs, and secrets and squabbles that prolong the inevitable conclusion.

Johns became a poster boy for the cold, inhuman face of British bureaucracy and its honest, stoical, working-class victim in Ken Loach’s multi-award winning I, Daniel Blake and Morrison seems to type-cast him here as a similar character. A retired nurse with a mixed-race family and a heart of gold, he retired early and sold all he could, and uses his pension to keep his wife in a good care home. Now he is shipped off to a high rise in Chingford.

Steadman is an OBE and award-winning stage and screen actress, but with the exception of a nice cameo in Burn, Burn, Burn in 2015, we have not seen her on the big screen since 2006. She seems uncomfortable in 23 Walks, less because she is ten years older than Johns, than because her role is underwritten and her character – the hurt, spurned wife, armed with defences – was played by Imelda Staunton in 2017’s Finding Your Feet, that would appeal to a similar audience.

In Finding Your Feet, Staunton also plays the victim of a well-off philandering husband of many years. Despite her pretentious airs and condescending manner, she finds herself falling for a kind-hearted working-class man (Timothy Spall) who had to sell his house to pay for his wife’s superior care home. In both cases, the spurned wife’s aloofness is, in part, a defence against being hurt again. In each film, the self-sacrificing gents are too slow to reveal to their new love interests that their wives are shut away in an expensive care home with Alzheimer’s. And in each film, the vegetating wives are conveniently kept alive long enough for the new love interest to be shocked and affronted by the discovery of this dark secret.

In British cinema, even in a 2020 romantic comedy, it is hard to get away from Jane Eyre.

You can read our review of Finding Your Feet by clicking here.