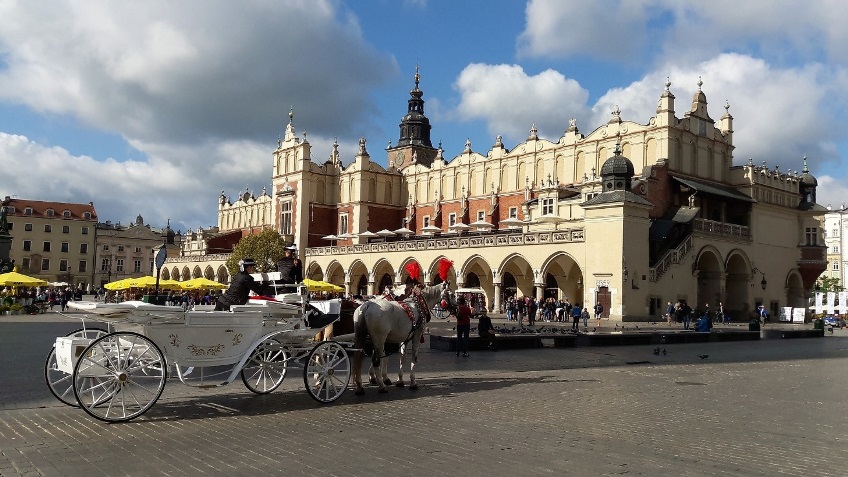 Poland, situated in the middle of Europe, constitutes the border between West and East. Over the centuries, trade and cultural routes have been intersecting here. As a result, in Krakow, the former capital of Poland, you can find numerous monuments from each of the Epoque. Renaissance, baroque, first and second World War periods as well as multiple cultures, all of which have had a significant impact on the actual appearance of Krakow as it is now.

If you are a traveler looking for advice on visiting Krakow then you will find a city full of history virtually around every corner. You don’t need to seek out the hidden and unique places in this city, it is a city that charms wherever you go.

Poland is rapidly becoming one of the most frequently chosen destinations for short city breaks. Two or three days are not really sufficient to visit all the noteworthy places. However, a weekend in Krakow can still instill a love for this charming city and the whole country.

The close location to the UK makes Krakow very affordable and an easy travel destination. At around a two hour flight, you can enjoy a different culture and similar weather conditions. You might be surprised – in Poland you may well experience more sun and less rainy and foggy days than you do in the UK.

Your flight to Krakow airport will take around two hours. The airport, named after perhaps Poland’s most famous person, Pope John Paul II, is located approximately 20 kilometers from the City Centre. The airport is easily accessible by either bus or train. You can buy tickets from the machines located on the airport concourse or at the train station. The train will take you to the main train station which is located in the centre of Krakow. You can also take a taxi from the airport. However, this can be a more costly alternative, especially at night. You can also reach the city using Krakow airport transfer. With this service comes professional help with handling your luggage, drop off directly at your accommodation and no hidden additional fees. You will be collected by a driver, who will be waiting for you in the arrivals hall.

There is also a great choice of hotels in Krakow to suit every budget. You can choose a budget option, a bit further from the city centre, but still easy to reach by tram, or a more expensive option providing higher standards, closer to the Main Square and the breathtaking views. There are also plenty of Airbnb providers, so there is something suitable for everyone.

It is worth noting that Krakow has numerous monuments listed on UNESCO’s World Heritage List. Among the places listed are the entire historic city center which includes the Main Market Square, Sukiennice (Cloth Hall), Barbican and the remaining fragments of the old city fortifications. Also listed is Wawel Hill with the monumental Castle and separate Jewish District called Kazimierz. The medieval, historic part is surrounded by the impressive defensive wall and green fields named Planty Park. Thanks to its characteristic architectural layout, remaining almost intact since the 13th century this area is a must to visit. In addition, all monuments are from either the baroque, renaissance or war periods. But there’s far more to it than that.

Main Square was the principal urban space in medieval towns. Its primary function was commerce, but its role has changed over the centuries. It witnessed executions, royal marches (the main square is part of the Royal Route), trade development, war, concerts and far more though its long history. The most extraordinary market building is the Cloth Hall (in Polish – Sukiennice) which once was the major centre of international trade. In its golden age, it was a source of exotic products imported from the East, such as spices, wax, silk or leather. Krakow also exported lots of goods – it was known for great quality textiles and also salt from the Wieliczka Salt Mine.

Interesting fact – from the highest tower in the city – of St. Mary’s Church, every day, every hour the traditional anthem called Hejnał, is played. It was mentioned for the first time in civic pay records from the year 1392. According to legend, it has been regularly played since the 14th century.

This is the most iconic part of Krakow. On the hill, towering at the bank of Vistula River, once lived kings of Poland. Here, in Wawel Castle, you can find plenty of interesting exhibitions about the lives of the kings that used to live there, Polish history and related issues. This luxurious residence consists of different structures from various periods, all situated around the courtyard which was built in Italian style. The royal chambers contain many paintings by famous artists. Besides the castle, you will also find the magnificent Royal Archcathedral Basilica of Saints Stanislaus and Wenceslaus full of richly decorated interiors. Crypts contain the remains of Polish kings, national heroes – generals and revolutionists, prime ministers and poets.

The Royal Route, which has been mentioned before, starts with Barbican and St. Florian’s Gate, goes along Florianska Street, crosses the Main Square, and then runs through Grodzka and Kanonicza Street to Wawel Castle itself. It has been travelled by monarchs after victorious battles, bishops, foreign emissaries and funeral convoys.

The convenient location on the hill above the river bank allows you to enjoy the unique view from the Castle terrace. The entrance to the courtyard is free of charge, and here you can take in the monumental Castle and its complex of buildings. You will also see the gold dome of Sigmund’s Chapel. After taking a few steps down, you can take a walk along Vistula boulevard, which also gives you a fresh look on the Wawel Hill from the bottom. A recently opened path along the river leads you to the Kazimierz Quarter, which deserves being explored separately. However, it is the next part of Krakow I would call must-see.

I hope that having read this article you are convinced to visit Krakow. Once you feel the magical atmosphere of this historic city, you will have to fight the will to stay here forever. However, you can always book tickets for your next visit to Krakow, as it offers multiple magical places to see and stories to hear.