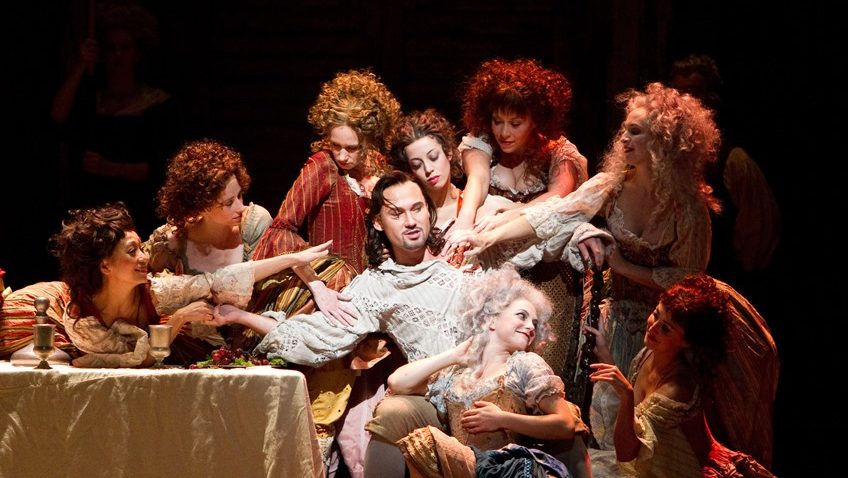 A quick and free way to find out about opera and the operas you like is to go on line and watch the nightly streaming of opera by The Metropolitan Opera House, New York.

Mozart’s Don Giovanni, a mixture of the serious and the tragic, within a comedy framework, premiered in Prague in 1787 and remains one of the most popular of all operas.

Don Juan is the ultimate alpha male. Luigi Bassi was the first singer, to play him. Bassi was only 22 years old. You can do the mathematics.

The opera begins with the raping of a woman and the killing an old man, her father.

Don Juan is a heartless libertine, a lying whoremaster, a nasty bit of work; but, at the same time, he has to be sung by a good-looking singer with bags and bags of charm and energy, especially energy. How else to explain the hordes of women queuing up for his favours?

Don Juan is a fictional character. In real life he could be Casanova. He could be Lord Byron, mad, bad and dangerous to know. He has been played on film by such swashbucklers with big swords as Douglas Fairbanks, Errol Flynn and Johnny Depp.

This production, directed by Michael Grandage and conducted by Fabio Luisi (who also plays the harpsicord) was seen at The Metropolitan Opera House, New York, in 2011. The cast is excellent.

Mariusz Kwiecień’s Don Giovanni has plenty of sex appeal. Marina Rebeka as Donna Anna, Barbara Frittoli as Donna Elvira and Mojca Erdmann as Zerlina are the three women he seduces.

The tender Elvira, who has two great arias, tries so hard to warn the other two. Zerlina, a flirtatious peasant, is more than willing to have sex with Don Juan, even on her wedding day. Masetto (Joshua Bloom), the bridegroom, gets beaten-up by Don Juan when he tries to stop them

Luca Pisaroni is Leporello, Don Juan’s hard-done by servant, who hates and admires him in equal measure and nearly gets killed by an angry mob when they swap roles. Pisaroni is a very likable performer.

Ramón Vargas as Don Attova, who loves Donna Anna, has two of the most beautiful arias and sings them to show-stopping applause I also much enjoyed the sextet in the second act.

Štefan Kocán is the Commendatore, a magnificent statue. You will remember Don Juan invites the statue to dinner, a hell of a mistake. He refuses to repent and everything goes up in flames and the floor opens under him and he is dragged down. It’s a spectacular finale.

You can watch a Met opera for free on any day. The Met Opera on Demand service also offers annual and monthly subscriptions as well as a one-off payment. This means you can watch any opera whenever you like. The archive is huge.