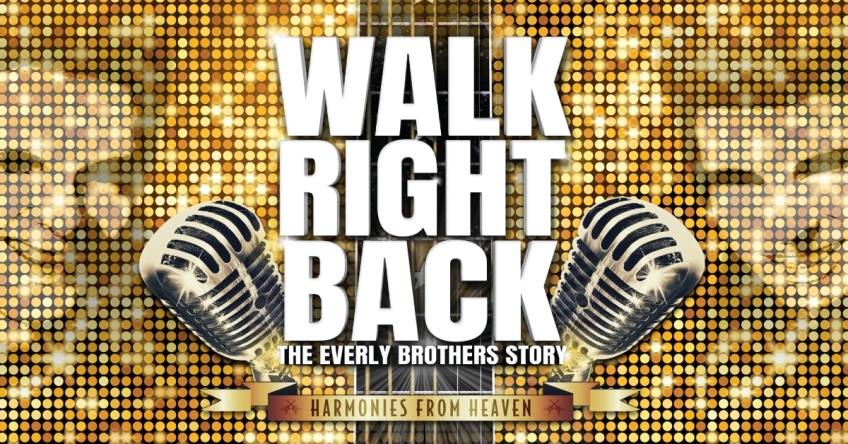 For anyone who longs to walk right back to the music of the twentieth century and luxuriate in heavenly harmonies, Walk Right Back with its story of the Everly brothers is just the job. It’s fine singing and top quality musicianship all the way, the show starting with simple beginnings and gradually building up colour, momentum and intensity to end with a concert that has devotees on their feet, singing, clapping and demanding more.

No acting is involved: the bare-bones story of the brothers’ career is narrated plainly and simply by the pair who sing Don and Phil – namely, Lars Pluto (who’s returned to the role) and Luke Wilson. Photos and film footage a-plenty run as backdrop to the simple stage set as the tale unfolds in short bursts, charting the boys’ rise to fame, their run of magical hits from superb songwriters, their far from harmonious ten-year split and their eventual reunion. Mainly, though, the show is about the music, with masterful, energetic musicianship from all throughout.

There are actually six fine performers on the stage, the other four by no means serving only as backing. Wilson and Pluto obviously take centre stage much of the time as Phil and Don, singing entrancing duets in spite of the absence of actual fraternal vocal cords, but the other four are equally exciting, charming and totally involved; it’s obvious at every moment how much they enjoy making and sharing good music. As well as contributing hugely, both instrumentally and vocally, to all the divine Everly duets – Cathy’s Clown, Crying In The Rain, All I Have To Do Is Dream, Wake Up, Little Susie, Bye-Bye Love and all the rest – they impress with solos and ring the changes with tribute acts to the likes of Buddy Holly, Chet Atkins and Johnny Cash.

Lovely, lively, smiling Eduardo Neto is the current percussionist, bringing home no end of neat tempo changes. He’s also a dab hand at pinging out percussion with a screwdriver on a Coca-Cola bottle as was originally done in Take A Message To Mary. Sean McAusland on piano and keys proves equally entertaining on the big, yellow double bass that Rick McKay chiefly plucks, slaps and throbs, alternating it with his bass guitar, while Tom Wright performs outstanding instrumentals on guitar.

The devoted fans were thrilled beyond bits, their mood scarcely subdued even by the tragedy of Ebony Eyes, while Lars Pluto’s Southern US accent proved so alluring to one Yorkshire lass that the repartee went flying through the air in all sorts of unexpected directions. In short, it’s a good night out.

The show now tours extensively in the UK before taking off to Canada. To find venues and dates follow this link.