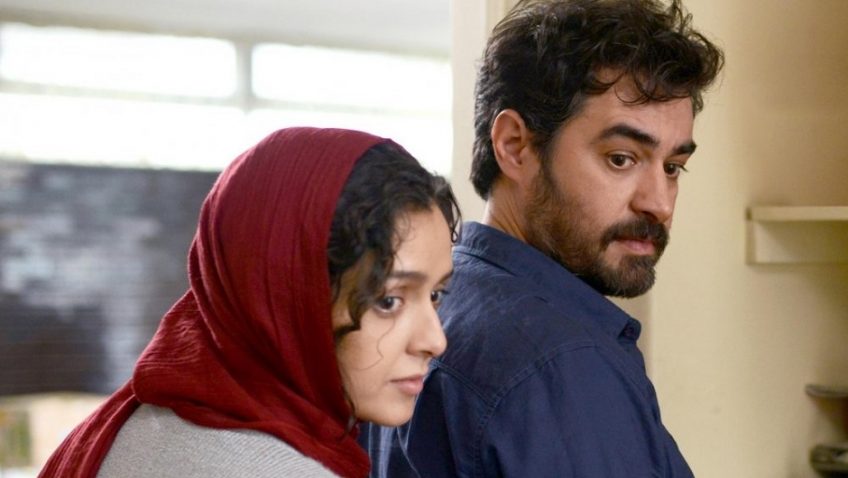 is probably as famous for the acclaimed Muslim writer/director’s refusal to attend the Academy Award Ceremony as for the film itself, for which he earned his second Best Foreign Language Academy Award. But while The Salesman

not does not hit the heights or the heart quite like Farhadi’s A Separation, it holds its own against Farhadi’s measured message about Trump’s travel ban, read out on his behalf by Anousheh Ansari – the first Iranian woman to go into space.

Based, in a deliberately ambiguous manner, on Arthur Miller’s great 1949 play, Death of a Salesman, it is as though Farhadi takes the idea of a dead salesman and works backwards, tracing the circuitous route that leads to a double moral crisis and something very different from Willy Loman’s suicidal death that takes place off-stage. The common ground is that both incidents can be attributed to the social laws and pressures that affect individuals in unfathomable ways.

High school literature teacher Emad (Shahab Hosseini and his wife Rana (Taraneh Alidoosti) are starring in an adaptation of Arthur Miller’s Death of a Salesman in their fringe theatre company.  The rehearsal is interrupted when the couple learn that their apartment building is crumbling, probably due to adjacent building work. This might be a metaphor, not only for the state of their country, but for their marriage when they move into temporary accommodation.

Annoyed that the previous occupant has left half of her affairs behind, the couple learn from neighbours that she is ‘a woman of many male companions.’ This, of course, is the polite euphemism for a prostitute and Emad becomes suspicious that the landlord, a member of the theatre troop, knew about this situation. Then, their lives are changed forever when Emad finds Rana lying bruised in broken glass on the bathroom floor. Rana admits that, believing it was Emad ringing the doorbell, she left the front door open before returning to the shower.  Is it for this reason, some notion of shame or for some other reason that Rana will not let Emad report the assault to the police? Then again, Emad never insists on reporting the crime.

Increasing estranged from Emad, Rana refuses to talk about her attack, but reproaches Emad for leaving her to go to work. While Rana is becoming annoying, we have to question why Emad could not take a day off to spend with this wife. When she tells Emad that she wants to return to the theatre, he indulges her, but it ends badly and returns home. While leaving, she offers to babysit for the adorable son of the actress – a single mother – who plays the prostitute with whom 60-year-old salesman Willy Loman has an affair in the play.

Emad grows increasingly frustrated at his helplessness. When he learns that Rana has used the cash on the previous tenant’s shelf to purchase groceries, he imagines it to be the wages of sin.  In one scene, as terrifying as it is heart-breaking, Emad throws out the dinner that Rana has lovingly prepared for the couple and their young guest – representing, perhaps, the child who is missing in their lives.

In the suspenseful second half of the film, Emad tracks down the intruder only to be confounded again by Rana. Shrewdly, Farhadi adds to the ambiguity of the title by introducing a new, significant character in the film’s cataclysmic finale.

A haunting exploration of masculinity, pride, revenge and morality in a country where Willy Loman’s hotel prostitute has to be fully clothed, there are no neat parallels between the titular play and the film. Those who have read the original play, however, will recall the very different social pressures in 1940’s America that prompted Willy’s irrational demonstration of love for his family.

One of film’s perceived shortcomings is the underwritten role of Rana, which might be paralleled, although Farhadi might protest, by the underwritten roles of the few women in Death of a Salesman.  Farhadi intentionally leaves the details of the assault ambiguous and confounds us with Rana’s reaction to her husband’s almost atavistic manner of alleviating his wife’s – or perhaps his – pain.

If Shahab Hosseini, the star of Farhadi’s A Separation and About Elly, won the Best Actor Award at Cannes for his role as Emad, it is surely for his embodiment of his character’s portrayal of a man transformed into a bully, while trying to do the right thing. Writing about the misunderstandings surrounding Death of a Salesman, Arthur Miller discusses the fate of his most famous character, Willy Loman: ‘But it seems to me that there is of necessity a severe limitation of self-awareness in any character, even the most knowing, which serves to define him as a character, and more, that this very limit serves to complete the tragedy.