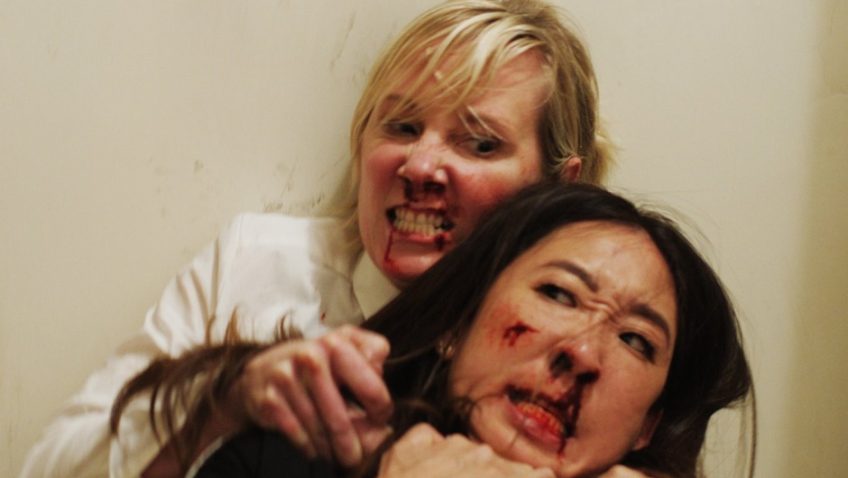 The New York based writer/director/actor Onur Tukel is a true independent filmmaker, producing, writing, directing, acting in and editing most of his low-budget films. He has made a film every year but one (2013) since 2011, but isn’t exactly a household name.  He’s one step closer to being one with Catfight, a farcical, satirical, and yes, political comedy about the darkest subjects imaginable.   In terms of vile female protagonists, Isabelle Huppert’s Elle has nothing on Anne Heche’s (Cedar Rapids, Wag the Dog) Ashley, although Sandra Oh’s (Sideways) Veronica offends primarily with her unearned financial snobbery.  Tukel’s uneven script balances precariously between pathos and black humour as opposed to real laughs. For the most part it succeeds, thanks to the acting skills of his two protagonists and supporting cast, with Alicia Silverstone (Clueless) earning a special mention.

The American dream is long dead, as are compassion, dignity, values and taste. As a wealthy Greenwich Village (with a house in the Hamptons) family sit down to breakfast, a television presenter announces that the new President has, as a priority, declared a new war in the Middle East. Veronica Salt (Oh) asks her teenage son Kip (Giullian Yao Gioiello) why he is drawing a deer.  When Kip ruminates that he might go to art school one day, she affectionately coos, ‘you can be anything you want as long as it involves going to Yale and working in the financial sector.’  Veronica’s husband Stanley, (Damian Young) is elated at the prospect of winning a fat defence contract while the family maid, Donna (Myra Lucretia Taylor) giggles at the programme’s signature farting man in diapers who skips across the screen.

Across town a potential client tells Ashley (Heche), a struggling painter, that his wife wouldn’t let him hang her paintings. ‘It’s not the red (she is obsessed with red), it’s the subject matter,’ he confesses for Ashley specialises in crudely drawn figures involved in sexually explicit acts and such novelties as a guillotined sperm.  Ashley treats her meek, squeaky-voiced assistant Sally (Ariel Kavoussi) like dirt, swearing at her and belittling her art, although Sally’s obsession with little blue bunnies is rather odd. Here audiences will grasp the parallel between Kip and Sally, but as the film progresses there are more obvious mirror images than this. Ashley and her girlfriend Lisa (Alicia Silverstone) are moonlighting as catering staff at a party where Veronica and Stanley show up.   Stanley tells Veronica to go home as her drinking could embarrass him on the night where he plans to announce the defence contract.  This prompts Veronica to drink more and, when she and Ashley recognise one another as old college mates, the initially civil repartee becomes belligerent. ‘I didn’t stop hanging out with you because you were gay’, Veronica explains awkwardly. ‘I had to make a call.’ She then further offends Ashley when she asks her, ‘Are you still doing that art thing?’ as though it were a bad habit.  When Ashley tells her she is an artist, Veronica points out, ‘You’re a f***ing caterer, Ashley’ Ashley spits back, ‘you’re a trophy wife!’

Veronica eventually stumbles home by the stair well where Ashley is smoking.  A catfight ensues and Veronica ends up falling down the stairs, unconscious.

Veronica wakes up in a hospital bed with Donna by her side. But Veronica is soon shocked to learn from the hospital’s ‘coma’ doctor, Dr Jones, (Dylan Jones) that she has been asleep for two years.  During that time her husband and son have died and all her assets have been depleted paying the hospital bills (another in your face political reference). This is her last night in hospital, as if she hadn’t woken they would have turned off the life support. Donna tells Veronica that Kip died in the war after they lowered the draft age to 16 (subtly is not the film’s strong point).  Donna then admits that she is only in the room because she works there part-time, and, in fact, gets Veronica a job cleaning hotel rooms with her. Donna also invites a contrite and apologetic Veronica to stay at her flat, where Donna has kept aside a box of Veronica’s personal effects that she salvaged from the bankruptcy sale.

When Veronica finds an art magazine in a hotel room with Ashley’s face on the cover, she realises that over the past two years Ashley has become Manhattan’s answer to Damien Hirst.  Veronica has checked into a seedy motel when Donna’s son returns from the war and, distraught and depressed over Kip’s death, she crashes Ashley’s opening by running off with the piece de resistance, a triple portrait of Veronica’s smashed up face. The crowd appears to mistake the trespass for staged performance art and (completely unrealistically) do not follow the two women outside where a second, more prolonged, catfight ensues.

This cycle of boom and bust continues, as the TV announcer declares, ‘It’s official, the War on Terror is over,’ and Ashley wakes up two years on to Dr Jones’ speech. It is not Donna, but Sally by her side.  Sally’s Happy Blue Bunny comics are the rage and she has taken over Ashley’s studio, but if she recovers sufficiently, Ashley is welcome to use it.  Ashley apologises for humiliating Sally, but Sally, who claims that it motivated her, rejects the apology with, ‘sometimes success is the best revenge.’ Ashley has lost her and Lisa’s baby, (conceived through artificial insemination), and even Lisa (who has fallen for a guy). All her art was sold to pay for her hospital care, which, of course, is about to expire.

By now, homeless Veronica has no choice but to swallow her pride and go to live with her ‘crazy,’ Aunt Charlie (Amy Hill).  A survivalist, Charlie lives alone in an isolated house in the woods, where she hugs trees, although not all of them. ‘This one’s named Hilary,’ she tells Veronica on the grand tour. ‘She’s tough but untrustworthy. And that one’s named Donald. He’s an asshole.’

The only people who come out of the story untouched by spite, greed, envy and revenge are Donna and Aunt Charlie, those with the least to lose. In addition to satirizing the relentlessly materialist and frivolous liberal middle class lifestyle (one of the best scenes in the film is the baby shower, where Lisa rejects a toy from China (‘we don’t know if they use lead paint’) and a baby outfit because it has polyester in it.  The war on terror is declared over, but what is happening with the women left behind on the home front? The self-destruction that is taking place within the country rages on, as Aunt Charlie watches her niece and a blond visitor locked in dubious battle by the river’s edge.