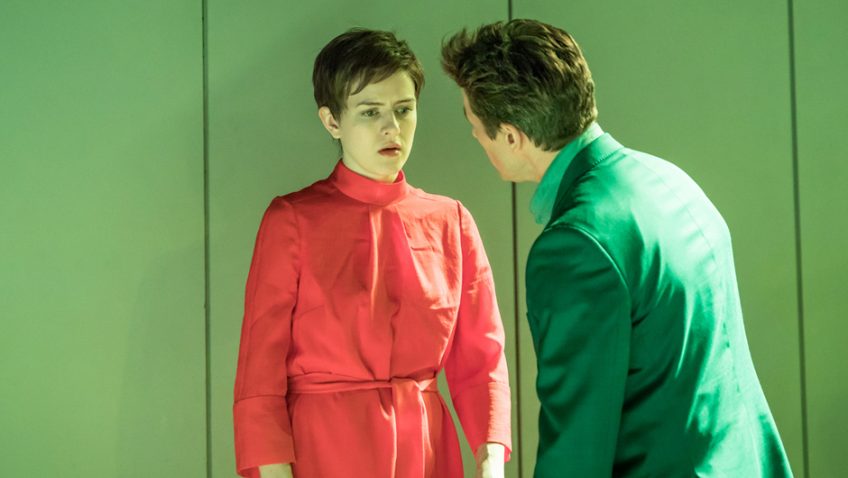 Martin Crimp gets the full treatment

Martin Crimp’s play, which premiered at the Royal Court Theatre in 1993, gets a rare revival. The treatment, he is writing about, is the process of transformation by which life becomes art.

In a series of short, sharp, satiric scenes, partly real, partly fantastic, Crimp explores what happens to scenarios in the movie business when disenchanted movie producers, dramaturgs, directors and actors get hold of them. Indira Varma in The Treatment

Art changes everything. It’s enough to drive any writer mad

Anne, a young and vulnerable woman (Aisling Loftus), describes to two film producers (Indira Varma and Julian Avendon) how she was bound and gagged by her husband (Matthew Needham), an electrical engineer.

The producers, a married couple, like her story so much they immediately want to rewrite it and even be in it. They bring on board a passé Broadway playwright (Ian Gelder) and a star actor (Gary Beadle).

When Anne objects strongly to her life being turned into Art, she is told “No one’s story is theirs alone.”

Her story, changed beyond recognition, becomes more and more unreal, more and more violent, an urban nightmare, until Anne is finally completely usurped on screen by a completely untrained and inexperienced actress.

All the world’s a stage and all the men and women are merely players. New York itself is a crowded stage, devouring its citizens.

One of the most striking features of Lindsey Turner’s production is the sheer number of supernumeraries (up to 29) who have nothing to do with the story, but are there as a constant reminder of the myriad other lives and myriad other stories we will never know..

There are amusing performances by Indira Varma as the vapid producer, outrageously rude in a Japanese restaurant, and by Ian Gelder, as the voyeuristic playwright, and especially by Ben Onwukwe who has a hilarious scene as a blind taxi-driver.