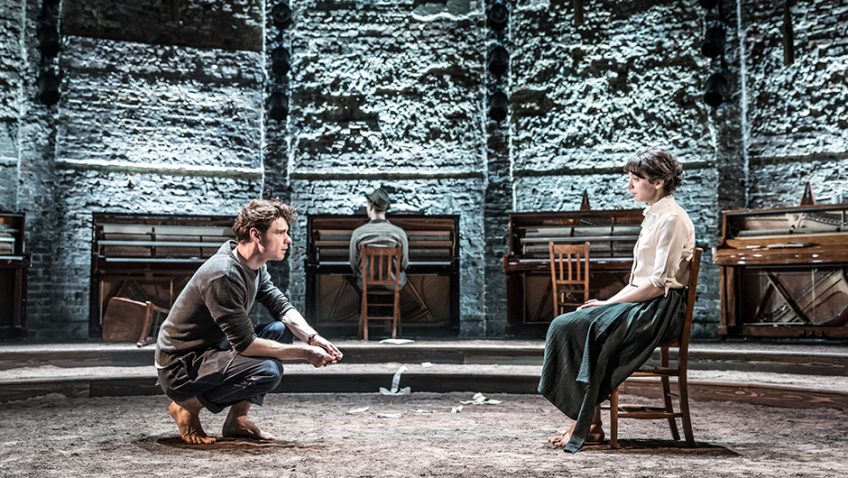 The girl who said “No’ – she doesn’t exist anymore, she died last summer

Tennessee Williams’ elegiac and heartbreaking play, a story of loneliness and unrequited love, is, in the light of his later work, unexpectedly gentle and delicate.

Summer and Smoke was critically acclaimed in New York at its premiere in 1952 and Geraldine Page had a big success on stage and screen in the leading role.

It has been rarely revived in London. Rebecca Frecknall’s clever production is only its third London production

The stage is stripped bare except for chairs. The back wall is dramatically lit. There are nine fully open upright pianos up against the wall. The actors, when they are not in the scene, sit with their backs to the audience at the pianos and often pretend to play. 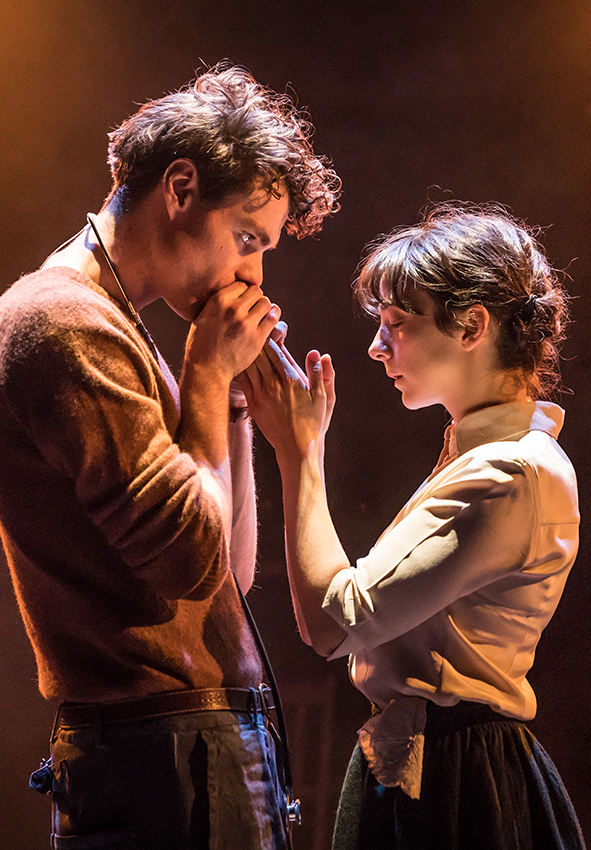 Matthew Needham and Patsy Ferran in Summer and Smoke

The script is cinematic. The scene changes are seamless. The action is set in the Mississippi Delta in 1912; but there is no Southern atmosphere and no Southern heat in this production.

There is no realistic set, either. There is no Angel statue symbolising Eternity. Time, too, is ignored.

Miss Alma, a minister’s daughter, has loved the boy next door, John Buchanan, since they were children. John has grown up to be a handsome, manly wastrel.

Alma is a product of 19th century Puritanism and bound by the codes of Behaviour expected of a refined young lady. She has grown up to be sexually repressed and prematurely spinsterish. She resents having had to run her father’s household from an early age and she resents having had no youth.

Alma has artistic and intellectual interests. John is into drinking, gambling and whoring.

Alma (the Spanish for soul) lives in the hope that she and John might marry one day; however, by the time she makes a big effort to be the sort of girl he fancies, he, ironically, has come round to her way of thinking and is a totally reformed character.

Williams thought Alma was the best female portrait he had drawn. She comes across as a portrait of the young Blanche DuBois – the heroine of A Streetcar Named Desire – before she had turned to prostitution and become dependent on the kindness of strangers.

Summer and Smoke is a milestone in the careers of Patsy Ferran and Matthew Needham, who are both terrific. Ferran plays up the fraught nerves, the Freudian hysteria, the fear of the animal in herself and others; and she is technically and emotionally riveting