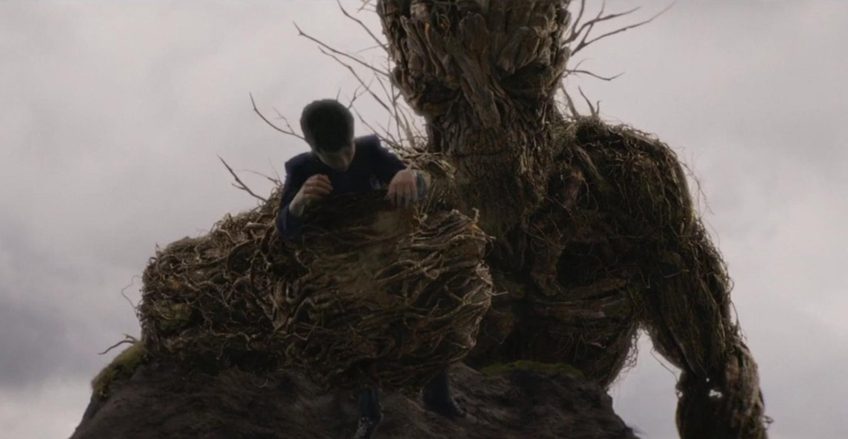 A Monster Calls (Focus). J A Bayona’s heartbreaking film feels like a modern classic, a genuine tear-jerker for thoughtful, intelligent family audiences. Conor, too old to be a child, too young to be a man, is having to cope with a dying mother, bullies at school, an absent dad and a strict granny. He has nightmares, brilliantly recreated, and cracks up and becomes violent, at school and in the home. The Monster is a Yew Tree (voiced by Liam Neeson) who tells the boy three fairy tales. The visual effects for the Monster and the watercolour animations for the fairy tales are impressive. 14-year-old Lewis MacDougall gives an intense and emotional performance which is utterly convincing

My Life As A Dog (Arrow) is a tender, comic-sad coming of age Swedish film directed by Lasse Hallström with great sensitivity in 1985. A young boy, coping with a dying mother, identifies with Laika, the Soviet space dog, the first animal to orbit earth. He is packed off to the country and stays with his eccentric uncle and becomes friends with a tomboy. There is a delightful performance by 11-year-old Anton Glanzelius, an impish cherub, with a winning smile; and he is the main reason for the film’s enduring popularity. His acting is so real that I am amazed he didn’t have a big film career. But Glanzelius didn’t want to be an actor; he wanted to be a footballer.

Silence (StudioCanal). In the 17th century two Portuguese Jesuit priests (Andrew Garfield and Adam Driver) journey to Japan to find their mentor (Liam Neeson) who has turned Buddhist. The Japanese are persecuting Christians and the presence of the priests only leads to more suffering and torture. The crucifixions, burnings, beheadings, drownings and bleedings to death are not easy viewing. Martin Scorsese’s epic can be stilted but it raises big questions. Does the priest have the right to let others suffer for his faith? If he commits apostasy, the torture and killing will stop. Renouncing Christ physically does not necessarily mean renouncing Christianity spiritually. What would Christ do?

Melody (Studio Canal).The screenplay is based on a collage of songs by the Bee Gees and ends with a big fight between pupils and teachers in which the teachers are routed. There hadn’t been such hordes of children on screen since Ealing Studios’ Hue and Cry in 1947. The cast is headed by Jack Wild and Mark Lester, who had had a big success as the Artful Dodger and Oliver Twist in Lionel Bart’s musical. Wild gets upset when the angelic, innocent Lester ditches him for a girl called Melody. The film flopped in the UK and USA. Nobody it seemed was interested in a story about 12-year-olds wanting to get married. But it was hugely successful in Japan and South America.

Born Free (Eureka). 1966 British film. Joy Adamson in Kenya raises an orphaned lioness as a pet and then she and her game warden husband have to train her to live in the wild and kill so that she does not have to go to a zoo The lioness easily out-acts Virginia McKenna and Bill Travers (married in real life and animal rights activists) who are saddled with some really awful dialogue. There are also good performances from a herd of elephants who put on a good stampede for the cameras. One question: did the warthog when he signed up to appear in the film know he was going to be eaten by the lioness? Bill Travers getting out of bed to kill a man-eating lion in his pyjamas will remind many people of the old Grouch Marx joke – how the lioness got into his pyjamas I will never know.