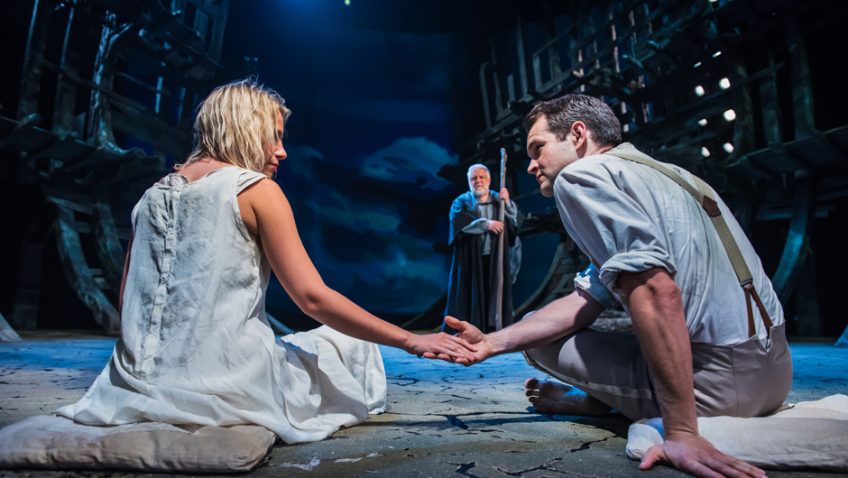 Robert Tanitch reviews the RSC’s The Tempest at the Barbican Theatre, London EC2

Shakespeare was a commercial playwright and he always gave the public what they wanted. In 1611 what they wanted was rough magic: elaborate spectacle, transformation scenes, music, song, dance and low comedy.

The Tempest very rarely lives up to its reputation in performance and proves too often to be an insubstantial pageant. The opening speech is one of the most boring in all Shakespeare. So boring that Prospero has to keep telling his daughter (and the audience) to pay attention. 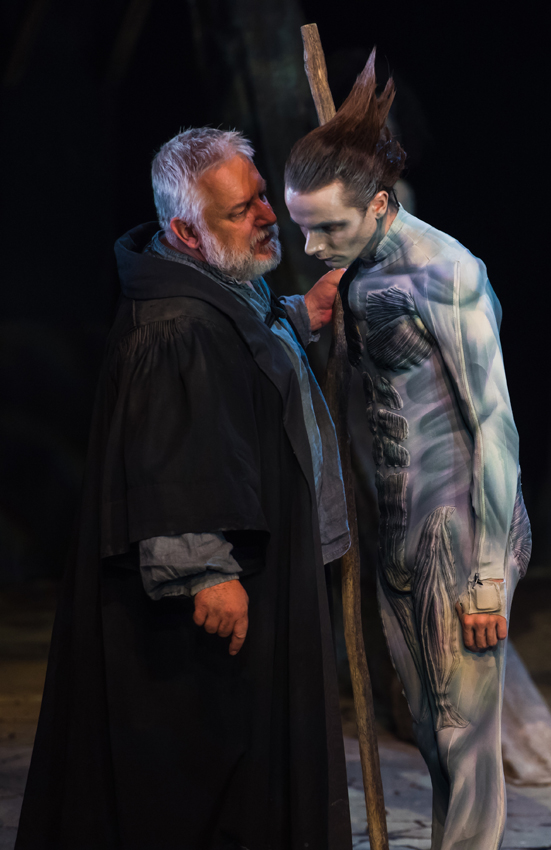 Mark Quartley and Simon Russell Beale in The Tempest

The reason actors want to play Prospero is because of the great arias, which all come in the latter part of the play. If you want to hear how thrilling they can sound, then you will have to listen to John Gielgud’s recordings in The Ages of Man.

The best and most imaginative Tempest I have seen remains Peter Greenaway’s film Prospero’s Books with Gielgud. It does superb justice to the masque element. I also much enjoyed a hilarious production in Russian directed by Declan Donnellan at the Barbican.

Shakespeare’s last play has always been technically challenging. The early performances in the 1600s were given the full Inigo Jones Masque treatment, singing, dancing and expensive scenery.

Gregory Doran, artistic director of the RSC, wanted to see what would happen if the very latest technology was applied to it and enlisted Intel and Imaginarium to create a live fluid digital environment.

The actual tempest is very disappointing. You never believe the actors are aboard a sinking ship. The clowns are unfunny, the shipwrecked lords are a dull lot and Jenny Rainsford, far too knowing, is miscast as Miranda.

The last time Simon Russell Beale appeared in The Tempest was for the RSC in 1996 in a production by Sam Mendes in which he played a supercilious Ariel whose studious politeness was always insolent. There was no affection between him and Prospero and on his final exit he spat in Prospero’s face

Beale is now playing Prospero. He has only one truly memorable moment and that is when Ariel shows he is more human, more humane than Prospero and Beale’s vexed Prospero, struck to the quick, roars and howls in his face.

Quartley, who sings “Where the bee sucks there suck I” beautifully, does not need all the digital stuff though there is an impressive visual when he transforms into a huge harpy. The downside is his words are upstaged.

The isle is full of noises, sounds and sweet airs, that give delight and hurt not. Certain images stand out: Ariel imprisoned in a cloven pine and the entrance of Ferdinand accompanied by spirits singing the Ding Dong Bell ditty.

The high spot are the colours which fill the whole stage and cyclorama in the Masque sequence and the singing of the goddesses and the dancing of the nymphs and reapers.