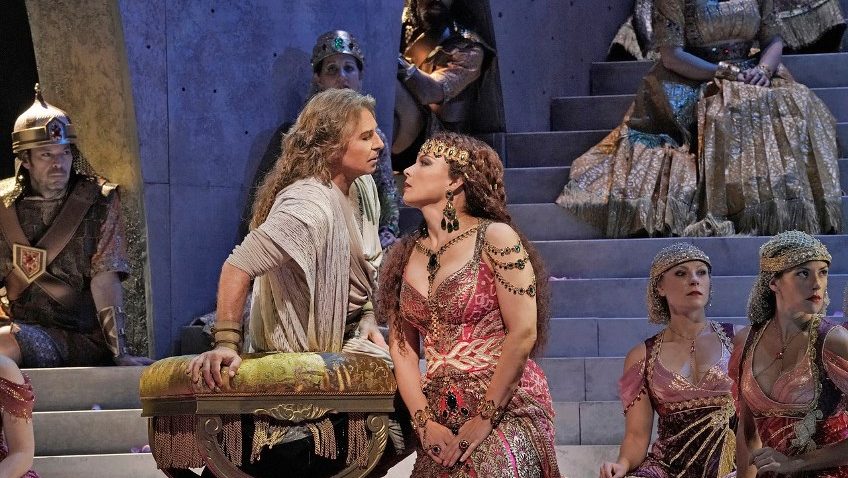 Camille Saint-Saens had intended to use the Biblical story for an oratorio but his librettist, Ferdinand Lemaire, persuaded him to turn it into an opera and it premiered after a long delay (due to the Prussian War) in Weimar in 1877.

Saint-Saens opens with the Hebrews deeply miserable about their bondage under Philistine rule. Samson, prodigiously strong (he slew one thousand Philistines with the jawbone of a donkey) rouses them; and their defiance gets the opera off to a powerful start. The sheer numbers the Met can afford in the chorus is an enormous advantage.

Dalila makes her first entrance down a long staircase accompanied by dancers, straight out of the Folies Bergère. The dancing is the sort of kitsch you would also find in a Hollywood Biblical epic.

Cecil B DeMille’s Samson and Delilah with Victor Mature and Hedy Lamarr, the blockbuster film of 1950, was totally tasteless and much more fun than John Milton’s Samson Agonistes.

Dalila (who has the most voluptuous music) is not the sort of woman who needs any encouragement from the High Priest of Dagon to take revenge on Samson, her former lover.

Samson drops into her home to say goodbye but he stays to have (er) a haircut. She sings Mon Coeur s’ ouvre a ta voix. I was surprised how sincere her love for him sounded. Who wouldn’t stay? The duets Garanca and Alagna sing in the second act are the opera’s high spot.

I had been looking forward to something comparable to the painting by Rubens, which has Samson, semi-naked in a lionskin, absolutely exhausted, sleeping, his head in Delila’s lap. But, sadly, quelle dommage, the actual hair-cutting etc, etc, takes place off-stage.

Tesnjak and his designer, Alexandre Dodge, however, do give the bacchanal at the Temple of Dagon the vulgar spectacle it needs. The statue of Dagon, split down the middle from top to toe, is ginormous.

Garanca, Alagna, Naouri, the chorus and the orchestra give the final act its momentum and power. Nobody will be surprised that Samson brings the house down.

NB The Metropolitan New York is streaming a different opera for free every night. To find out what is on click here.