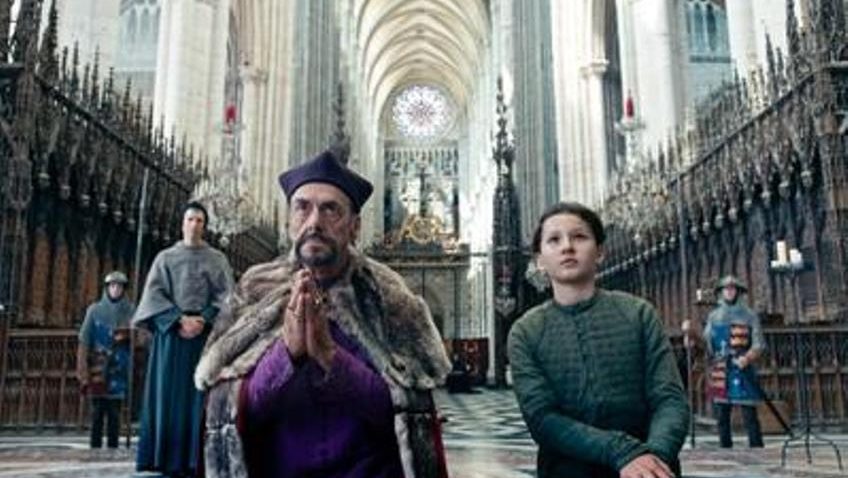 Bruno Dumont is one of France’s greatest living filmmakers and perhaps its most unpredictable. The variety and scope of his work, range from cinema films with explicit sex and violence (The Life of Jesus, Twentynine Palms) to films of great solemnity and profundity (Camille Claudel 1915, Hadewijch, Hors Satan) to absurdist police procedurals (Slack Bay) and to an astonishing, surreal miniseries with (P’tit Quinquin) with socio-political dimensions, released here as a cinema film.

Like the writer Charles Péguy, Dumont’s personal take on Catholicism infuses his art. It might still surprise his fans that this highly original auteur, not known for historic or literary adaptations, would take on the well-trodden story of Joan of Arc. There have been no fewer than 15 cinema versions (the earliest from 1900), of the tale of the maid from Orleans, one of the most famous being Otto Preminger’s 1957 Saint Joan in which Jean Seberg suffered serious real burns during filming of the execution scene. Danish auteur Carl Theodor Dreyer’s 1928 The Passion of Saint Joan remains, arguably, the greatest version ever made.

The mystery is solved when you consider Charles Péguy, author of the credited underlying source. Born a peasant like Joan, in Orléans, the scene of her triumph, Péguy also fought – and died – in a great patriot war: WWI. Convinced that “nobody is so competent as the sinner in matters of Christianity; nobody, except the saint,” Péguy’s The Mystery of the Charity of Joan of Arc is a three-person play in which a 14-year-old Joan anguishes over her faith with her best friend, Hauviette (the voice of common sense) and then with a local nun, Madame Gervaise (the voice of Catholic teaching).

Dumont uses this as the basis of his film The Childhood of Joan of Arc, (Jeannette) which was not released in this country, might have prepared us for part two, Joan of Arc. The verbosity of The Childhood of Joan of Arc, was punctuated by spontaneous dancing, singing and modern music. Perhaps the distributors felt British audiences would want to skip the “origins” story and cut to the chase. After all, it was the British, with their allies the Burgundians, who had Joan burnt at the stake for heresy.

The trouble is Dumont makes us wait a long time for that to happen. The drama until then is not obvious, nor is the casting. Péquy’s other two characters, Hauviette and Gervaise disappear in Joan of Arc after an early connecting scene, along with the actress who portrayed the older Joan in part one. In Joan of Arc Dumont brings his younger actress, 10-year-old Lise Leplat-Prudhomme to play 19-year-old Joan.

Dumont admits that he is not a naturalistic filmmaker. ‘My work is all about transfiguration. It’s an entirely poetic world. It’s totally surreal. But the only way to strive for reality to go through reality.’

If Slack Bay was compromised by self-indulgence, in Joan of Arc Dumont misjudges his ability to go through reality in a poetic world. While Péguy’s script is full of poetry, it is somehow lost in the transfiguration. As in Slack Bay, Dumont forgets the audience, and here, despite the young actress Lise Leplat-Prudhomme’s charismatic face and intriguing stare, you cannot feel the tragic humanity through the artifice.

And what artifice. Primarily unknown actors (non-actors) with no make-up show up in a sand dune (familiar from other Dumont films set in the Pas de Calais) at the opening of the film to discuss military strategy in highly mannered, stilted dialogue. There are musical interludes throughout (though not electronic), including two singing nuns in the Royal Chapel of Rouen scene, and the voice of 75-year-old French singer Christophe, singing a quasi-falsetto that is quite effective. Christophe returns to play one of Joan’s prosecutors, Guillaume Evrard. There is a precedent here, as Dreyer cast the striking looking “Theatre of Cruelty” exponent Antonin Artaud as prosecutor Jean Massieu in his 1928 masterpiece.

It is 1430 and France is at war with England, which controlled Burgundy and Rouen. The struggling French King Charles VII (Fabrice Luchini, Slack Bay, In the House), had sent Jeanne to relieve his failing army at the Siege of Orléans. She was successful, enabling Charles to be crowned in Reims Cathedral. With the French army’s morale restored, many looked to Jeanne for a follow-up, if not sainthood.

But officials want to ensure she is still being guided by Saints Michael, Margaret and Catherine, and Jeanne seems confused. In Péguy, Joan is racked by doubt over the killing in war and how Christ’s disciples could have abandoned him to his fate. Still, her voices command her to wage war in order to kill war, and she must now beat the enemy at Compiègne. Speaking of war, we have never seen war or battle in a Dumont film and probably never will. Here, given the budget, it is just as well.

The film’s main location is The Royal Chapel of Rouen Castle which in Dumont’s film becomes the stark gothic cathedral of Amiens. Here we are introduced, one by one, to Joan’s prosecutors. Referring to William Haiton (Yves Habert), Fidèle Pierret (Laurent Brassart), a judge too neutral to be invited to the trial, shows up to ask, ‘Isn’t that an English man?’ The increasingly odd sounding Maître Nicolas L’oiseleur (Fabien Fenet, Slack Bay), responds ironically, ‘isn’t our Mother Church glorious for being universal; ignoring human distinctions between England and France?’ One hundred years later, Henry VIII would answer that rhetorical question.

Nothing quite prepares us for Lise Leplat-Prudhomme’s Joan, who defends her faith before a rigged jury of unsympathetic sadistic zealots. Dumont has made unusual casting decisions before, but perhaps none as daring as casting this unknown 10-year-old to play the 19-year-old maid. The very novelty, her compelling face, along with Prudhomme’s convincing pious fervour, courage and conviction keep us watching even if Joan’s emphatic refusals to describe her orders from God, sound more like tantrums from a headstrong, testy little girl.

You can read our review of Camille Claudel 1915 by clicking here.

You can read our review of Slack Bay by clicking here.

You can read our review of P’tit Quinquin by clicking here.

You can read our review of Hadwijch by clicking here.