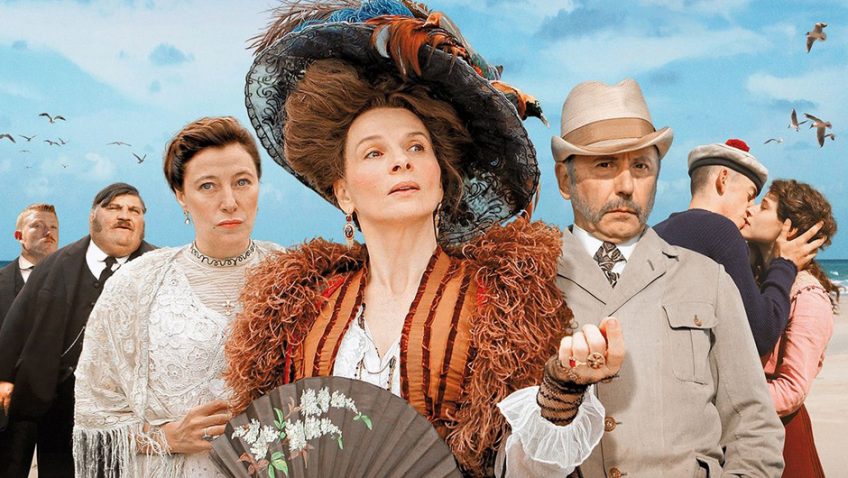 French writer/director Bruno Dumont might be an acquired taste, but once acquired, it is an addictive one, particularly when you never know what the eclectic and accomplished auteur will come up with next. Dumont’s interest in religious themes and in creating a sense of place – most recently, his birthplace in the Pas de Calais – find their way into Slack Bay (Ma Loute), a stand-alone companion piece to Dumont’s 2014 slap-stick murder mystery set in the Pas de Calais P’tit Quinquin (L’il Quinquin). Apart from the spectacular scenery, locations and costumes of this period piece set in 1910, Slack Bay features wacky performances from the great, 65-year-old actor Fabrice Luchini (Gemma Bovery, In the House); Juliette Binoche and Carla Bruni’s talented sister Valeria Bruni Tedeschi (Times to Leave, Human Capital). There might be much to admire in Slack Bay, but a lot of it is self-indulgent and more self-consciously weird than wonderful. In its portrayal of the interaction between two dysfunctional, inbred families, the bourgeois Van Peteghems on holiday from Tourcoing and Calais, and the local Brufort clan of ferrymen and oyster gatherers, Slack Bay is a surreal reimagining of The Rules of the Game or Downton Abbey, in its depiction of class differences before World War I. But Dumont is out to satirise anything that can be satirised and seems oddly determined to make his characters impossible to relate to on any level.

We first meet the uncouth Brufort clan as they squabble while gathering oysters. They supplement their living as ferrymen, either carrying or rowing tourists across a waist deep body of water. The most striking of L’Eternal Brufort’s (Thierry Lavieville) four sons is the eldest, Ma Loute (Brandon Lavieville), a lanky, quiet and retiring thug with rotten teeth, huge ears and an impulsive violent streak. Admiring the oyster gatherers and all the local colour in a patronising manner is the high-spirited Van Peteghem family, driving up to their villa from Tourcoing, near Lille.

But all is not well in the glorious seaside resort. A Laurel and Hardy team, Chief Inspector Machin (Didier Despres) and his long-suffering sidekick, Detective Malfoy (Cyril Rigaux), have arrived on the scene to investigate a series of disappearances. We bear witness to the violent deaths of three hapless tourists who go missing after being ferried across the marshes of Slack Bay, where the Slack River meets the sea at high tide. There is no mystery in the murder here as there was in P’tit Quinquin. The Bruforts clobber their victims, cut up their bones and stew them for dinner in the courtyard of their rustic hovel called St Michel in the ‘fisher’s district.’

André Van Peteghem (Luchini) and his family – his two daughters and wife Isabelle (Tedeschi), prone to falling and nervous attacks – are spending the summer in a cliff top villa in the ’Egyptian Ptolemaic style’ with Egyptian engravings on the side wall and spectacular views of the deserted bay and beaches below. André, a hunchback whose arms dangle uselessly when he walks, might be the most accessible of the eccentric family, but they all show signs of inbreeding.

Every year André and Isabelle invite Andre’s cousin Billie (Raph) to join them. He is a beautiful young man who dresses like a girl and wears a wig. André may or may not be Billie’s father with Aude (Binoche), a highly-strung hysteric related to André. Isabelle’s brother Christian (Jean-Luc Vincent) Van Peteghem is both Andre’s brother-in-law and cousin, and feels immune to the disappearances as none of the victims thus far have been from Calais, where he now lives.

That the risible first name Ma Loute is a term of endearment; that Machin means ‘thingy’ in French slang, and that Malfoy is literally translated as bad faith – although he appears to be the most reliable of the lot – are just a few of the ways in which Dumont plays with language. Machin, who is so obese that he rolls down the dunes, and falls on his side when he kneels to examine evidence, also mispronounces the family name Peteghem every time he says it. This takes the form of different spelling in the sub-titles. Many of the references and jokes are probably beyond international audiences, but you hardly miss what is yet another layer of eccentricity.

As the bungled investigation continues, so the danger escalates for the Van Peteghem family, precariously united for a short period with the Bruforts by the touching romance between Ma Loute and Billie. When Aude, Billie and Christian all go missing, however, Machin calls in the National Guard to search the dunes.

As a fond send up of the director’s birthplace, P’tit Quinquin was a fresh, original and funny gem, but here Dumont has gone overboard and it is very difficult to laugh – or cry. The burlesque and repetitive falls (eventually Machin literally balloons and floats away) grow tiresome, while it is difficult to care about any of the characters. Dumont might have gotten away with this had the four Van Peteghem adults toned it down, but they are squarely in pantomime mode, over acting and gesticulating.

As a craftsman, however, Dumont is as brilliant as ever. Every shot is perfect and the location shooting is ever breathtaking. A shame, then, about the inhabitants of this inhospitable land.