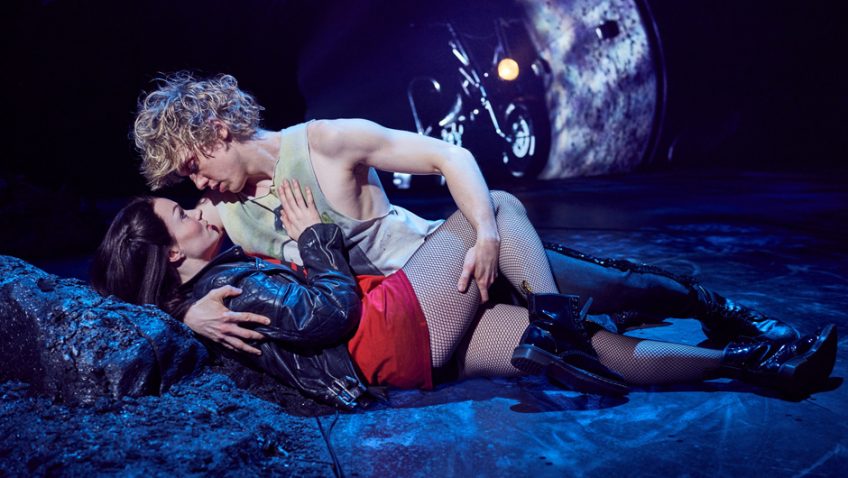 You took the words right out of my mouth

Robert Tanitch reviews Bat out of Hell at London Coliseum

On a hot summer night, would you offer your throat to the wolf with the red roses? It’s a good question and if you know where it comes from you will have probably already booked your seats

Meat Loaf’s Bat Out of Hell, released in 1977, was one of the most influential and iconic albums of all time. There are 17 great hits and 43 million copies have been sold worldwide. Danielle Steers and Dom Hartley-Harris in Bat out of Hell

Jim Steinman has now turned the album into an epic jukebox theatrical spectacular. There was a huge red carpet outside the Coliseum. Motorbikes roared down St Martin’s Lane.

The only reason for going to see the musical is for the songs: I’d Do Anything For Love, All Revved Up with No Place to Go, Heaven Can Wait, Paradise by the Dashboard Light, You Took the Words Right Out of My Mouth, Dead Ringer For Love, For Crying Out Loud, Two Out if Three Ain’t Bad and Bat Out of Hell

The biggest laugh of the evening is when the eternally young hero (Andrew Polec) proposes to the heroine (Christina Bennington) and she doesn’t think it a good idea because he will always be 18 and she will grow old. She wonders if he will still love her when she is 30.

The middle-aged audience roared with laughter. They laughed again when she wonders if he would still love her when she is 39.

There’s a good joke, too, when a car crashes into the orchestra pit, much to the annoyance of three musicians who clamber out of the pit, their musical instruments destroyed

Jay Scheib’s over-amplified production is notable for the ugly, unimaginative vigour of its choreography.

But Meat Loaf fans will still have a good time, thanks to the strength of the singing and performances by Andrew Polec, Rob Fowler, Aran MacRae, Danielle Steers and Dom Hartley-Harris.