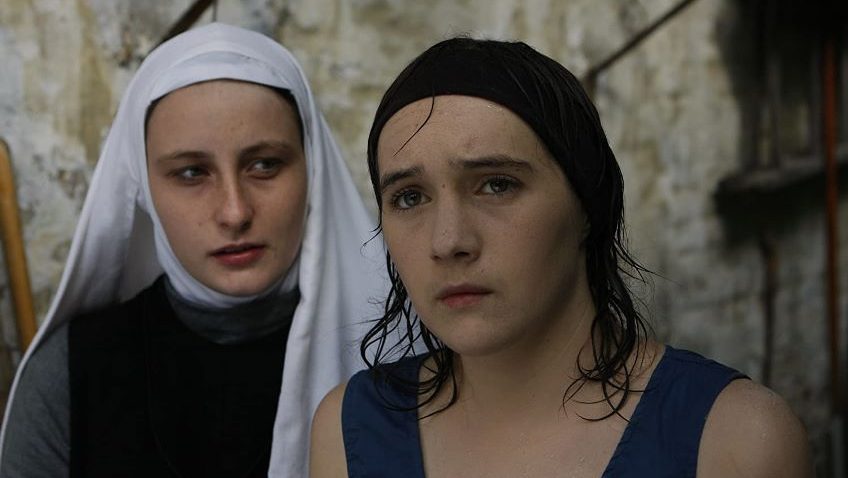 The films of French writer/director Bruno Dumont (The Life of Jesus, Twentynine Palms), tend to focus on the consequences of extreme behaviour and are, even by art house standards, pretty extreme in their own right. To date, they can be characterised by gaps in the story, batty characters, explicit sexual scenes, violence, most notably rape, and characters divided by their backgrounds, languages or religions. In the compelling, haunting and ultimately profound Hadewijch, the rape, violence, religion, love and suffering are, with one climactic exception, internalised, as its 20-year-old protagonist discovers how hard it is to feel the Divine touch here on earth.

Céline, (Julie Sokolowski), a 20-year-old Parisian, changes her name to Hadewijch when entering a monastery where she hopes to become a nun. Like her namesake, the 13th century mystic and poet Hadewijch of Antwerp, Céline comes from a wealthy family but chooses to live in a cold, spartan room, starve herself, freeze during winter and pray all day before representations of Christ.

Hadewijch’ s route to unification with Christ is not the slow courtship of the novice nuns, but an urgent burning need. Dumont does not push the analogy with the eruption of a young woman’s repressed sexual feelings, but it is there; and it is what gives the film its poignancy – and hope.

Hadewijch is expelled from the monastery for her excessive behaviour which the Mother Superior considers unhealthy and lacking in humility. Hadewijch, now Céline again, must face the challenges of living with her father (Luc-François Bouyssonie), a Government Minister, and her subdued society mother (Marie Castelain), in their palatial home on the exclusive Isle St Louis.

Céline, who might benefit from a good psychiatrist, is adrift and at risk in the secular world. She gets involved with two Muslim brothers, Yassine (Yassine Salime) and Nassir (Karl Sarafidis). Yassine is an unemployed, petty thief, hungry for sex, but too afraid of Céline’s purity, and too in awe of her social status, to force it. Nassir, a pious Islamic scholar, is hungry for war against the infidels.

Nassir realises that Céline’s obsessive personality and blind faith could be of use to his militant Middle Eastern colleagues and she impresses them with a trancelike speech. “It is God, our God, who has led me to you” she tells the bearded strangers. “He has chosen me, he has ravished me. I am his. He is my beloved.” Her eyes wander off to a distant bombed out building with the word “Eternity” written on the roof.

The idea that extremists of different faiths have more in common than moderates of the same faith is not a novel one; but it is particularly well dramatised in Dumont’s uncompromising script. What gives Hadewijch its power, however, is the minor story of David (David Dewaele) that winds its way unobtrusively through the main plot.

Early on in the film we see David, an ex-con, working with a construction crew at the monastery when two policemen come and take him away. Hadewijch, praying in her own “cell”, might have noticed this event, but her mind is not on mortal men. At the end of the film David, who has served three months in prison, is back at the monastery as is Hadewijch/Céline. This time, when the police come, David looks bemused, but also intrigued, when they pass him by and head for Hadewijch. The dramatic ending could easily have collapsed into schmaltz, dogma or contrivance but we don’t see it coming and are completely disarmed. Through the sincere humanity of the final shot, Dumont unveils a genuine spiritual experience.