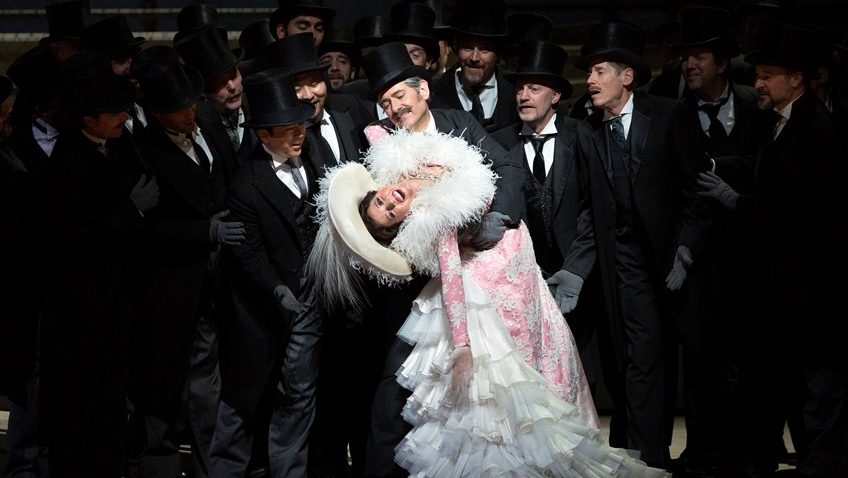 Jules Massenet’s lush romantic score has kept Manon in the French repertoire ever since it premiered in Paris in 1884.

Abbey Prevost’s 1721 novel has been updated to the Belle Epoque which suits its subject matter very well; and makes it even more French and sexy.

Manon (Lisette Oropesa), an innocent young girl, is meant to be going to the convent. Instead she elopes to Paris with a young chevalier (Michael Fabiano) she has just met and with whom she has had a passionate duet.

“How wonderful it would be to live only for pleasure!” she cries. Manon loves Chevalier Des Giroux but she loves wealth and luxury more and is persuaded by her cousin (Artur Ruciński), in a great quartet, to give him up and take up with rich men instead.

Laurent Pelly directs Manon when she is the toast of Gay Paree as if she were in a musical comedy and gives her a Hello, Dolly entrance down a ramp, surrounded not by young waiters but by lecherous men in black suits and top hats, all looking for a good time.

One of her wealthy admirers (Carlo Bosi) thinks he can buy and keep her by hiring a ballet performance specially for her entertainment. (Ballet in La Belle Epoque was a good place to pick up prostitutes.)

Des Grieux, not surprisingly, gives up all idea of entering the priesthood and soon, because of Manon’s reckless spending, they are in debt. They go to a gambling house, much against his better judgement, to recoup their losses. He is accused of cheating and they are both arrested.

The opera does not end, as Prevost’s novel does, in the swamps of Louisiana but on an empty French highway. Des Grieux bribes the police who are deporting Manon to let her stay and have a great duet with him before she dies in his arm.

Massenet’s opera is one reason why people go to opera. Lisette Oropesa and Michael Fabiano sing gloriously throughout.

NB. The Metropolitan New York is streaming a different opera for free every night To find out what’s on click here.