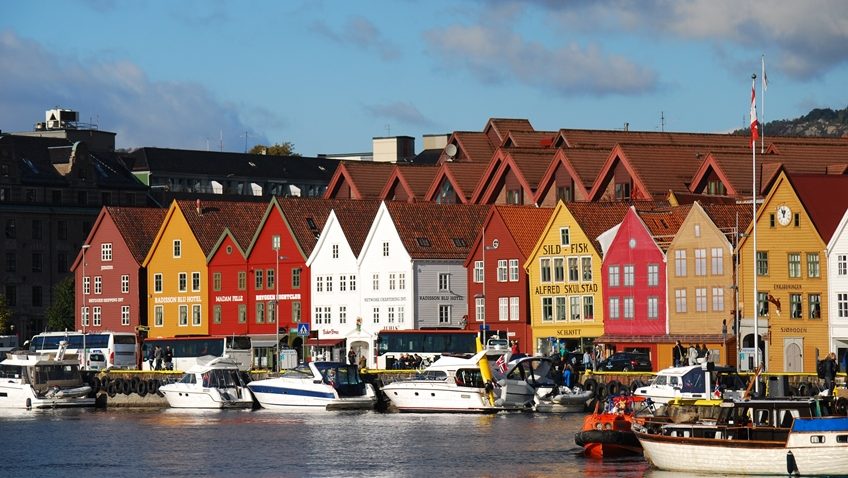 We cast off from Dover on a passage of discovery, that intriguingly, would include a city tour visit to a bar full of sculptures inspired by international artists and all made of ice.

But first we had a five-hundred-mile North Sea voyage to Bergen on-board the classic Fred. Olsen cruise ship MV Boudicca.

Surrounded by mountains, this small coastal city is the gateway to Norway’s famous fjords which my wife Jenny and I had never visited.

It would be fun to plunge into sub -zero temperatures in that ice bar I mused while relaxing by the pool on a blisteringly hot afternoon.

But our port talk host sounded a note of warning when he mentioned that Bergen, being so close to the mountains, had an average 240 days annual rainfall and it was the only city in the world where he’d seen a vending machine for umbrellas!

Alas, it actually was raining when we arrived there but now in holiday mode, there was no way we were going let a drop of h2o dampen our spirits.

It was a short waterfront walk to the town centre where we were amused to find a café handing out free plastic ponchos to customers.

We sampled cod fishcakes, a local delicacy, in the quayside fish market, served up in a grease proof bag and looking for all the world like mini crumpets.

Then it was on to that ice bar to admire the carved sculptures while sipping a highly alcoholic drink made from wild strawberries out of goblets, made of ice of course!

An overnight voyage found us sailing towards the small village of Hellesylt, a Unesco World Heritage site at the head of the Sunnylvsfjorden.

But stepping out onto the deck, it seemed as if I had been teleported back to an earlier voyage through New Zealand’s spectacular Doubtful Sound with its waterfalls and towering peaks shrouded in low cloud.

This must be Norwegian fjord land in truly atmospheric mode, I thought.

We joined other early risers on the curved deck above the bows, watching the mountainous scenery unfold before us as MV Boudicca nosed her way slowly up the narrow waterway.

Hellesylt, dominated by a spectacular waterfall, was the starting point for our scenic morning drive through forest and farmland to the Stranda Mountain Resort.

Here we took a cable car to gain stunning views over the neighbouring Storfjord and Sunnmore Alps and feasted on waffles topped with sour cream and strawberry jam.

The sun burst through the clouds on our return to reward us with a glorious afternoon but we sailed away from Hellesylt with some gloomy news.

The forces of nature, it seemed, were slowly conspiring to sweep away this tiny community and neighbouring villages.

For a deep fault was developing in a nearby mountain that would cause it to slide into the fjord in around one hundred years so causing a giant tsunaml, we were told.

We spotted a tiny monitoring station high above us while dining alfresco beside the pool as we sailed back along the fjord, passing the spectacular Seven Sisters waterfall, bound for the open sea.

Arriving in the small fjordland town of Olden the following morning, another spectacular experience was in store with a scenic valley drive beside sparkling turquoise melt water lakes towards the Briksdal Glacier and national park.

This ice sheet is just one small arm of the mighty Jostedal Glacier, the largest in Europe.

We parked in woodland and took a stunning forty-five- minute climb on a good path beside a raging white-water river with its thundering roar in our ears and spray dampening our waterproofs.

Emerging through the trees, we found a small melt water lake with the glacier perched high up on the rocks in front of us but this was not to be the finale photo opportunity.

For the high mountain views and sunlit rainbows now dancing in the spray from the roaring river and waterfalls made an equally stunning spectacle as we retraced our steps to the visitors centre with time for coffee and cakes.

Back at the ship, we lunched beside the pool and spent the rest of the day and entertainment filled evening in relaxation mode.

After another overnight voyage we arrived at the tiny picturesque town of Flam at the end of the Aurlandsfjord and to yet another memorable highlight of our cruise.

For this is the start of the Flam Mountain Railway, rising some three thousand feet via twenty tunnels through some of Norway’s most spectacular mountain and fjord land scenery and said to be one of the world’s top ten railway rides.

More excitement was in store when we cast off again in the early evening to cruise through Norway’s narrowest fjord the Naeroyfjord on our way to Stavanger our penultimate port of call.

Here we moored up opposite the old quarter with its picturesque wooden houses, so quaint that some tourists, we were told, had adopted the annoying habit of peering through people’s windows and even walking into private flower filled gardens.

Then while strolling around, and averting our prying eyes where necessary, we came across a small pottery studio and bought a tiny house from local ceramicist Torhild Jacobson to add to our memories collection.

All too soon it was time for our final fjord cruise to Eifdfjord and another spectacular morning’s drive up onto the Hardangervidda mountain plateau, the largest in Europe and to enjoy more breath- taking views over the Halne Lake.

On the way we called in at The Fossli Hotel, where Edvard Grieg stayed several times, and fourth generation family owner Erik Garen showed us the piano used by Norway’s most famous composer.

Then it was back to the ship to begin our day- and- a- half’s return voyage to Dover with ample time to relax and reflect on a most memorable holiday.

Nigel Heath was a guest of Fred.Olsen Cruise Lines, whose fleet of four smaller, classic ocean ships – Balmoral, Braemar, Boudicca and Black Watch – plus river cruise vessel, Brabant, will be visiting no fewer than 277 destinations, in 90 countries, in 2020/21. Complementing the UK departure ports of Southampton, Dover, Liverpool, Newcastle and Edinburgh (Rosyth), Fred.Olsen will also be offering an expanded programme of exotic fly-cruises in 2020/21.