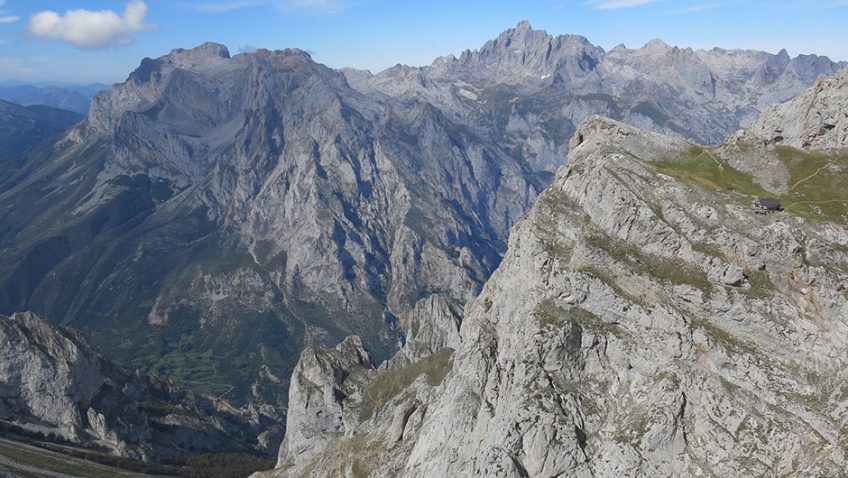 Nigel Heath takes a cruise along the coast of Northern Spain

The haunting notes of Fernando, the sorrowful song about a Spanish boy, came sobbing softly from a grand piano as we sailed down the Mersey from Liverpool towards the open sea.

It seemed the perfect serenade for my wife Jenny and I who were sitting comfortably in the Observatory Lounge, nine decks above the bows of the Fred Olsen cruise ship MV Boudicca and bound for Northern Spain.

Ahead loomed a ghostly forest of slender wind turbines silently helping to save the planet as a sturdy Isle of Mann ferry steadily ploughed her incoming course.

It was a Friday afternoon and we were sailing to La Coruna, the first port of call on our cruise along the coast of Northern Spain also visiting Aviles, Santander and Getxo for Bilbao. The Tower of Hercules, La Coruna

But first we spent a day at sea familiarising ourselves with this classic 1973 built cruise ship, while hardier souls paced the windy decks and solitary gannets with their coal black wing tips, skimmed the white crested Atlantic waves.

After a lunch of succulent prawns and stir fry from an ample buffet, where we could have ended up like a couple of beached whales, we enjoyed a piano concert of classical Spanish music.

The world’s oldest lighthouse built by the Romans in the first century and a Unesco World Heritage site, was our first tour stop after arriving in La Coruna on Sunday afternoon.

But it was our visit to the nearby Galithian town of Bettanzos and a traditional Cheese House, where our small party were welcomed by a piper in traditional costume and playing the bagpipes, that was the highlight of the afternoon.

For he also played an accordion with much humour and great gusto, so rousing us to clap and cheer as we watched the light, creamy cheese of the region being made and were plied with tasty samples and local wine.

Overnight, we sailed to Aviles in the principality of Asturias where nearby steel mills evidenced the fact that this is one of Spain’s most important industrial centres. But coming out on deck and blinking in the sunshine, our attention was snatched by the massive white domed contours and stunning circular tower of the Oscar Niemeyer cultural centre on the far side of the quay.

The great advantage of Aviles is that the ship docks close to the old quarter with its squares, narrow linking streets and medieval 14th and 15th century architecture.

We stopped for coffee outside one of the many cafes and bars and were delighted when the proprietor suddenly appeared with a delicious plate of complimentary tapas, apparently a regional custom and known as pintos

But disaster almost struck later when we ordered a litre of local cider just to watch the waiter perform the local trick of holding the bottle above his head and pouring the contents into our glasses.

“Bravo,” we chorused as the golden liquid found its mark but then it was “oh no’ as droplets also splashed over Jenny’s new leather bag! Amazingly the ugly blotches all dried and disappeared in a couple of minutes.

A magnificent sunset welcomed us as we again relaxed in our Observatory Lounge eyrie as Boudicca cast off to voyage eastwards to the busy port city of Santander.

Just over an hour’s drive from here, the jagged limestone peaks of the famous Picos de Europa mountain range rise up some 8000 feet from the coastal plain and they, we decided, were a sight not to be missed. And what an excellent optional tour choice it was as after leaving the coastal motorway, we wound our way for 23 kilometers ever higher through the narrow La Hermida Gorge crisscrossing its fast flowing river on narrow bridges amid towering peaks of jagged limestone.

Then, like a train leaving a tunnel, we burst out into a tranquil alpine scene and found ourselves in the mountain village of Potes with narrow and colourful streets full of cafes and bars where tourists jostled with sturdy back packers and others sat around taking coffee and soaking up the sunshine.

A hearty lunch followed a guided walk but then, alas, it was time to return to the ship where we dined alfresco and a la carte as Boudicca cast off and sailed a further 40 miles along the coast to the famous Basque region seaport of Bilbao. Again we woke to blue skies and were soon driving past the world’s oldest transporter bridge, designed by a disciple of Eiffel, on our way to view a late 20th century marvel, namely the Guggenheim Museum.

The sheer scale of what looked to me like a giant jumble of tin cans, only they were made of shining titanium, was simply breathtaking not to mention its two guardians, namely a huge metal spider and a random giant floral dog.

There was no time to venture inside this cavernous masterpiece as we were off to tour the old town and sample some more pintos.

But we left the coach on its return journey to pay our respects to the memory of Alberto Palacio who built that World Heritage listed transporter bridge. We walked across the top, accessed via lifts at either end, and returned on its car carrying gondola before walking back to Boudicca which later slipped out of Bilbao to begin her 800 mile voyage home across the Bay of Biscay.

Again blessed with fine weather and a moderate breeze we spent the following day sun bathing, reading and strolling around the decks from where we spotted several pods of dolphins. Around late afternoon, a small migratory bird, which looked like a spotted flycatcher, fluttered onto the deck and hopped about a bit before taking off again. We were sailing home to autumn and the onset of winter so we hoped this little fellow made it to sunnier climes.

Nigel Heath was a guest of Fred Olsen whose four classic cruise ships offering fine cuisine and excellent service will sail from Dover, Southampton, Newcastle, Liverpool and Rosyth to a host of destinations during 2018.