Home / LIFESTYLE / REVIEWS > / FILM REVIEWS / A heart warming, if formulaic, true story from the director of The Full Monty. 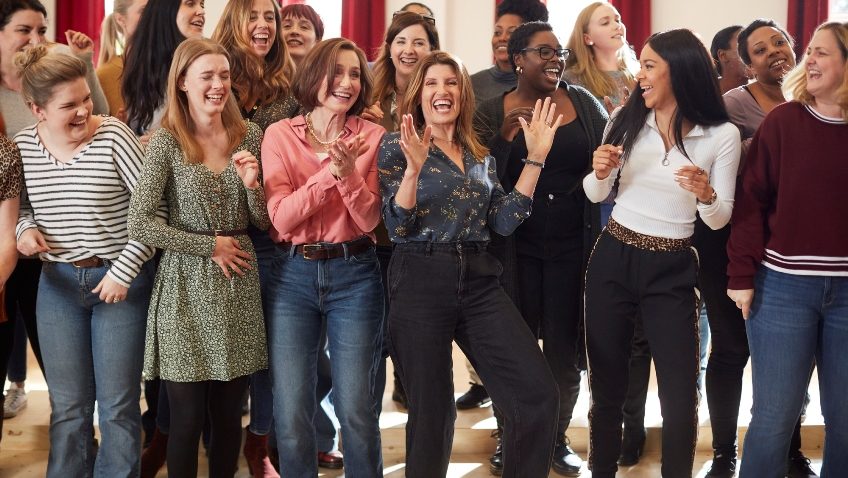 A heart warming, if formulaic, true story from the director of The Full Monty.

The Military Wives are now a global sensation with 75 choirs performing around the world. So, despite being heavy-handed with dramatic licence, Full Monty director Peter Cattaneo’s song-filled, crowd-pleasing origins film about how it all began, will attract more than a captive audience.

Kate (Kristin Scott Thomas) and Lisa (Sharon Horgan) have nothing to sing about with their husbands shipping off for another tour in Afghanistan. For six months, they will wait for news in the drab accommodation and isolating sameness of the military base. It’s not just the loneliness, but the worry – symbolised by a cacophony of text messages and buzzes that are sent to the women when their loved ones overseas are incommunicado. The message signals that the men (or women – there is a lesbian couple to cover all the (no pun intended) bases) cannot be reached for operational reasons, and not to worry. But of course, they do, as it could also mean something more sinister.

For Kate, who has already lost her only son, false alarms are the good news. To alleviate the boredom and depression, the women organise group activities. The trouble is the wives have been there and done that and are all too aware they are just passing time. A knitting club proves short-lived when the women realise that they are better at drinking than knitting.

While Kate reminds everyone that ‘it’s not typical for a Colonel’s wife to get involved’, she desperately needs to be involved. Kate suggests a film club – with a cultural aspect. Lisa breaks the news gently that when the wives go to the movies, they like to have fun. Could Cattaneo being sending us a message?

Lisa has her problems, too, including a teenage daughter Frankie (India Ria Amarteifio) who is drinking as much as the knitting club ladies, and seems to be going off the rails. One night when Frankie comes home drunk and cannot get into her house, Kate invites her in. When she finds Frankie asleep at Kate’s, she is touched, and the women, for the moment at least, focus on what unites them rather than what separates them.

The idea of a choir is popular, but autocratic Kate, who hides her vulnerability with insufferable snobbery, and unpretentious, popular Lisa, are the rival candidates for leading it, and they have very different ideas and organisational skills. At every step of the way, they clash. Moreover, they cannot turn anyone away, including one lady who is tone deaf. Fortunately, Jess reveals a golden voice that goes a long way in a choice and makes those solos possible, but can she get over her stage fright? And how will Kate and Lisa ever agree on the selection of songs?

The choir looks like it will go the way of the knitting club, but when the group is offered the chance to perform for The Festival of Remembrance at the Royal Albert Hall, there is no turning back.

If you can feel the wives’ boredom and the claustrophobia of a military garrison, and feel that frisson of authenticity in the production design, it is not surprising as the film was shot on location at RMB Catterick in Yorkshire where the first military wives’ choir was formed. And Kate’s house, which appears in several scenes, was the actual setting for the first choir meeting back in 2010.

If Cattaneo keeps the tone light, he is careful to balance the laughter with more sobering scenes out of respect for the 456 who have died in Afghanistan and the families who have lost them. There is more than one scene included to reflect the grim reality that the choir was formed to keep at bay.

It would be a spoiler to say which wife receives the dreaded knock on the door, and while it is so convincing you could be watching a recreation, the scene would have been so much more effective had we known the husband, even by a conversation on Skype with his wife. While actress Amy James Kelly is good enough to put a tear in our eye, her husband is just a faceless name and it’s therefore harder to feel involved.

It is obvious that great deal of research has gone into the script by Rosanne Flynn and Rachel Tunnard. They insert little details that enhance the feel of authenticity, so that the military wives in the audience will be nodding in recognition. While Military Wives certainly has Cattaneo’s trademark feel good factor, it cannot quite rise above its Calendar Girls’ formula and predictability.

While so much rings true, even taking into account creative licence, a few scenes seem to have slipped through the cracks. It is curious that Kate’s husband, Richard (Greg Wise), is pushing their deceased son’s car up a hill shortly after leaving the military hospital with serious torso injuries, and odd that he wasn’t preparing to attend the concert. When Kate returns home instead of boarding the coach to London, Richard is relaxing upstairs with a drink. Was he really going to miss his wife’s concert, or, equally unbelievably, going to drive by himself from Yorkshire to London that night in time for the performance?

You are willing to put these oddities behind you when Kate and Lisa’s cathartic, verbal cat fight sounds so shockingly realistic that you are squirming in your seat. ‘Let-it-all-out’ tantrums between two adult women do not get any more real than this dual at the coach stop which, curiously, seems to solidify their relationship rather than destroying it. There are other credible touches too, all the better for being subtly handled. In one, Richard balks at a closet full of Kate’s compulsive online shopping, but resists the lecture, realising that it is her way of filling the void.