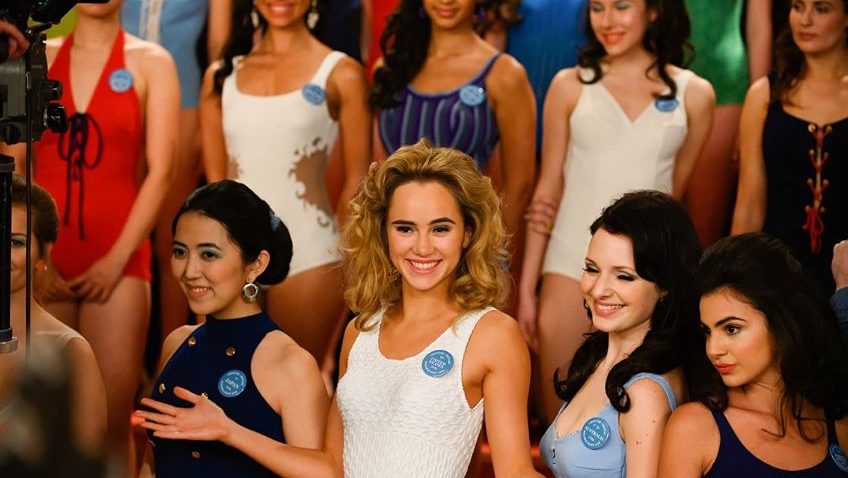 Produced, written and directed by women, and with a largely female cast, Misbehaviour tells the ironic true story of how the controversial, 1970 Miss World pageant in London, hosted by the sexist, womanising celebrity Bob Hope, helped launch the fledgling Women’s Liberation Movement in the UK. It is a great, crowd-pleasing story and one that offers Keira Knightley another well-cast role, although not nearly as meaty as last year’s excellent Official Secrets. It’s just a shame that the producer of bitter-sweet comedies Calendar Girls and Kinky Boots, Suzanne Mackie, seems to have shoe-horned Misbehaviour into a similar category, when a harder edge would have raised the bar.

The all-male admissions panel from University College London frown at divorced, mother of one, applicant Sally Alexander (Keira Knightley), and jot down number ratings on their notepads. The academic question about British rebellions is answered with aplomb, but eyebrows are raised when she mentions her young daughter, the absent father, and (cue higher eyebrows) the new live-in boyfriend who can look after the child while Sally studies. Perhaps worst of all is that Sally is a mature student. She senses this, and promises to be the most mature mature student at UCL

Her determination and her impressive degree in history from Ruskin College, Oxford land her a place in the BA programme at UCL. The real Sally Alexander, who was married to actor John Thaw before the events in the film, is now Emeritus Professor of Modern History at Goldsmiths, University of London.

Sally is not a woman to be held back by a man’s world, as was her mother and is motivated to act after seeing her 9-year-old daughter parading around in make up after watching the Miss World advertisements. Relying on her mild-manned boyfriend, Gareth (John Heffernan) and her mother, Evelyn (Phyllis Logan) with whom she and Gareth live, to child mind, low-key leafleteer Sally is gradually drawn into a group of working class, militant feminists, led by Jo Robinson (Jessie Buckley, disappointing).

Sally clashes at first with Jo’s hard-line and is shocked that the women live together in squalid conditions, pooling their cash and food in what resembles a commune. If Sally does not voice any objections to their morals, (two of the women are pregnant (including Jo) and have no idea who the father is) she objects to their criminal activities, and saves Jo from being arrested for spray painting slogans on a wall.

But by the time the women become involved with The Peckham-Rye chapter’s idea to interrupt the broadcast of the Miss World Pageant at The Royal Albert Hall, Sally is so caught up in the movement that she cannot keep her promise to be the most mature mature student at UCL.

Director Philippa Lowthorpe intercuts Sally’s story with the two other parallel stories of pageant organisers and the contestants themselves. Julia (Keeley Hawes) and Eric (Rhys Ifans) Morley are attempting to get Bob Hope (Greg Kinnear) to host the pageant, despite a scandal in 1961, when, as his long-suffering wife Dolores (Lesley Manville) never lets him forget, he returned to California with the prize and the prize winner. The organisers also have to deal with racism and pressure to diversify. Although 80% of the population of South Africa is black, there has never been a black contestant. Sleazy, fast thinking and practical Eric Morley decides to have two Miss South Africa’s, one white and one black, and Julia recruits black judges. When Grenada’s Chief Minister Eric Gairy offers to serve on the judging panel, she probably thinks of the lucrative television network deals and viewing numbers rather than the conflict of interest.

Co-writer Rebecca Frayn (daughter of the great British playwright Michael) adds a much-needed dimension to her story by focusing on these issues of race and culture as well as on class and generational differences within the women’s movement itself. While Jo and Sally represent different classes in the women’s movement, in a brilliantly written argument between Sally and her mother puts Sally in her place when she passes judgment on her mother’s life, arguing that women can have it all.

Meanwhile, we get to know the main contestants and follow them as they are assigned chaperones, rehearsed like commodities to smile at dummy cameras and paraded in bathing suites before a crowd of all male reporters. A major sub-plot sees Grenadian contestant Jennifer Hosten (Gugu Mbatha-Raw), a beautiful, poised and dignified airline hostess with ambitions to work in broadcasting, act as a kind of mentor to the shy, bewildered Loreece Harrison (Pearl Jansen): a factory worker with a government imposed gagging order, and the first Black Miss South Africa.

Through conversations between the two wildcard black contestants – the favourite is the cynical, professional model, Miss Sweden (Clara Rosager) – and a fictitious encounter between Sally and Jennifer Hosten, the film put the aims and assumptions of the British Women’s Liberation Movement into a distinct cultural perspective.

Lowthorpe (TV’s Three Girls, the Other Boleyn Girl) adroitly handles the parallel stories and their shifting emotions, but the small screen feel, uneven script and the limited budget let the film down. Audiences can recognise Poirot programme staple, the 1930’s Eltham Palace interior, as the unlikely 1970 Los Angeles Hope residence and the white pillared building that is passed off as the world-famous Albert Hall, changes size in every shot. Greg Kinnear looks nothing like the distinctive Bob Hope and lacks his charisma, although hats off to Lesley Manville whose Dolores Hope forms her own #Me Too movement with panache.

Perhaps the biggest regret, however, is that the film is not given a harder edge, not only in the sanitised treatment of the contestants, but with the conspicuous failure to address future Prime Minister Gairy’s alleged vote rigging or bribery and its possible connection to the shot of Miss Grenada as the Grenadian Ambassador to Canada. Hosten speaks idealistically about the eyes of little black girls seeing themselves on the world stage through Miss World, but at what price?