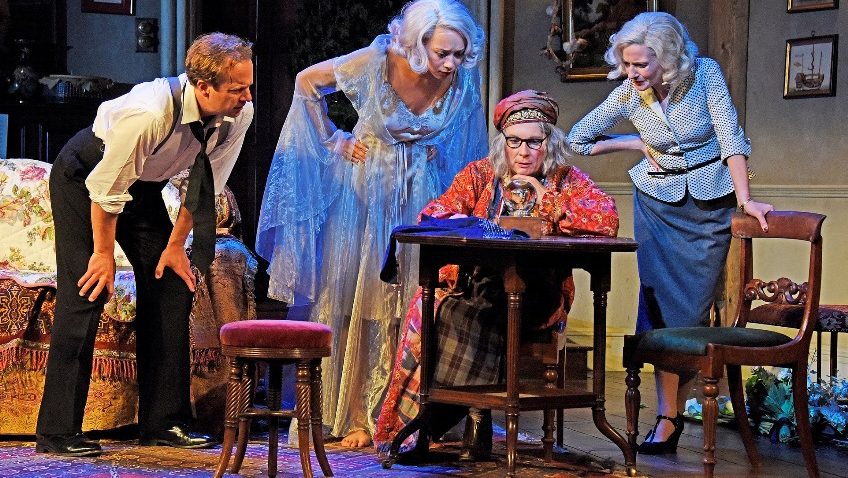 Blithe Spirit is not as blithe as it should be

BLITHE SPIRIT, one of Noel Coward’s most popular plays, was written in five days during World War II at the height of the Blitz in 1941 and produced six weeks later. It ran for four and a half years and 1,997 performances, a record then for a straight play.

The Church disapproved of Coward’s flippancy but the comedy’s phenomenal wartime success was precisely because it did take a flippant view of mortality and because it also held out a hope of life after death and reunion with loved ones.

Author Charles Condomine (Geoffrey Streatfield) was married to Elvira (Emma Naomi) who died of a heart attack. Seven years later he is married to Ruth (Lisa Dillon) and as part of his research into the occult for his latest book, he has invited Madame Arcati (Jennifer Saunders), a medium, to conduct a seance so that he can observe her in action.

The situation of Condomine haunted firstly by one dead wife and then two dead wives is excellent.

Coward always took great pride in the fact that there were no alterations once it was typed and that he had to cut only four lines. The comedy is witty in feeling but actually short on witty lines, and would be better for more cuts. Two and a half hours is too long.

The eccentric, bicycle-riding medium (based on the novelist and playwright, Clemence Dane) is not the leading role but it is the role which everybody remembers.

Margaret Rutherford’s definitive jolly schoolgirl performance is preserved in Antony Asquith’s film version. It comes as a surprise to learn that she had initially turned down the role, which had been written specially for her. Rutherford was a believer in spiritualism and did not wish to mock mediums.

Jennifer Saunders takes a more mannish approach than most.

Richard Eyre’s production is not witty and hampered by a top-heavy set with book shelves going high up into the rafters. The diaphanous, sly, irresponsible and incorrigibly selfish Elvira is usually considered the better role of the two wives; but not when she is poorly acted and Lisa Dillon is cast as Ruth

The funniest role in this revival is not Madame Arcati, but her conduit, the maid; and Rose Wardlow, who has to make every entrance and exit on the run finds a great deal of comic energy in the running gag.