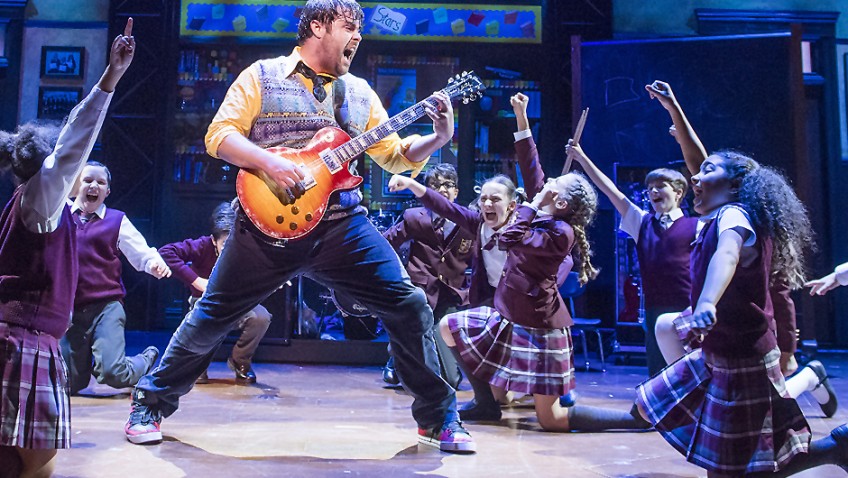 What sort of teacher would you prefer to teach your child? Would it be Robert Donat in Goodbye Mr Chips, Michael Redgrave in The Browning Version,  Sidney Poitier in To Sir, With Love, Robin Williams in Dead Poets’ Society or Richard Griffiths in The History Boys?

Would you be happy with a failed rock singer and guitarist with no qualifications masquerading as a teacher? The lyrics are by Glenn Slater. The book is by Julian Fellowes. The director is Laurence Connor.

The production has done extremely well in New York. There is no reason why it should not do equally well in London.

Family audiences love musicals with lots of kids. Just think of The Sound of Music, Oliver!, Annie, and Matilda for starters.

The wannabe rock star is out of work, can’t pay the rent; and that’s why he’s teaching in an elite primary school. He introduces the kids to hard rock and liberates them. He forms a band and enters them for a competition

School of Rock is about self-expression and the empowering force of music. Andrew Lloyd Webber believes in it so strongly that he is allowing all academic schools in the UK to get a licence and perform the musical absolutely free.

The songs include You’re in the Band, If Only You Would Listen, Stick It to the Man, Where Did the Rock Go? and Amazing Grace.

David Flynn plays the teacher, a shaggy bearded, pot-bellied slob who can’t spell and hasn’t grown up. He plays him with considerable charm and energy and holds the whole show together.

In real life head teachers, parents and governing bodies would be up in arms and he would probably end up in prison. On stage, thanks to Flynn, he is very likeable, very funny and great fun.

One of the most famous stage adages and attributed to WC Fields, is “Never work with children or animals” and that’s because they will steal every scene they are in.

Flynn has to act with 39 children. There are three rotating sets of children, 13 in each set.  He survives. Nobody upstages Flynn.

The kids, aged 9 to 13, are skilled musicians. Andrew Lloyd Webber in a voice-over pre-show assures us that all the kids are playing their instruments live. They are talented lot.