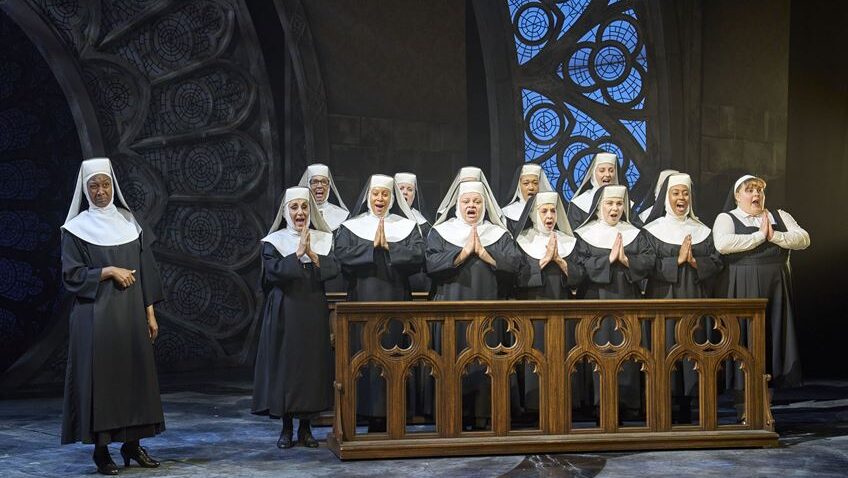 This big, boisterous disco musical by Alan Menken and Glenn Slater was scheduled to open in 2020. Whoopi Goldberg, who had played the Mother Superior at the London Palladium revival in 2010, was to have played Deloris Van Cartier, the role she had created in the 1972 film.

But Covid delayed the production twice. Deloris is now played by Beverley Knight. Jennifer Saunders is the Mother Superior.

Deloris is a nightclub singer who witnesses a murder committed by her gangster boyfriend. She seeks refuge in a convent where she jazzes things up and teaches the nuns to kick the habit and sing and dance.

Beverley Knight has the personality, the voice and the star quality the role and such numbers as Fabulous, Baby and Sister Act need.

Clive Rowe is the cop who loves Deloris. He has, when he is singing, I Can’t Be That Guy, not one, not two, but three lightning quick costume changes, one after the other.

Lizzie Bea as an apostate stops the show with The Life I Never Led. The Damon Runyonesque gangsters (Bradley Judge, Tom Hopcroft and Damian Buhagiar) have their show-stopping moment when they sing Lady in the Long Black Dress.

Bill Buckhurst’s frenetic production is very long and very, very loud. The Act 1 finale, Take Me to Heaven, and the Act 2 finales, Spread the Love Around and Raise the Roof, have the audience on their feet.

Following its London run, Sister Act will tour the UK and Ireland from September 2022 to June 2023, visiting 24 cities. You can find out more by clicking here.

Note: Roles mentioned may be played by different actors on the UK tour.