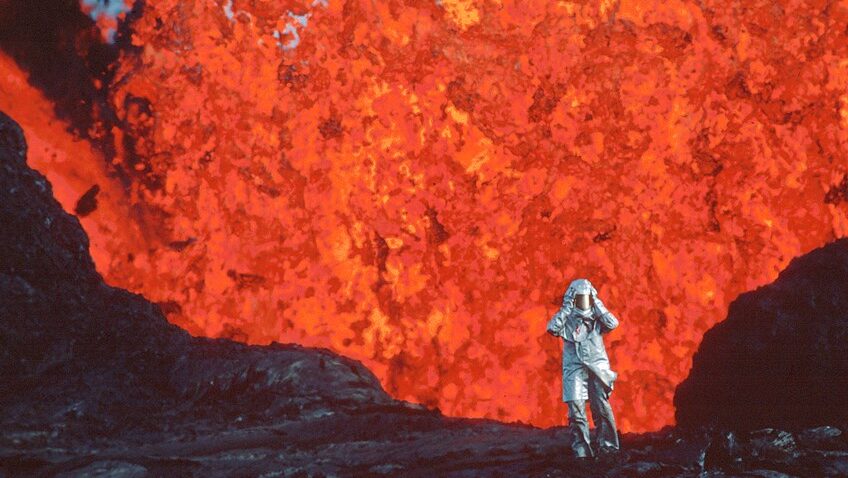 In director Sara Dosa’s documentary for National Geographic, Fire of Love, the explosive, hot, dangerous and seductively beautiful nature of volcanos is used as a metaphor for the passion that united French volcanologists Katia and Maurice Krafft, in life and in death. It’s an apt metaphor for their singular story, told against the background of the awesome footage for which they willingly risked and ultimately gave their lives.

The filmmakers have digitised the best of thousands of hours of film footage and photos taken by the Kraffts themselves and, thirty years after their death, combed through their extensive archive to tell this story of a mutual obsession. Unfortunately, their choice of Miranda July, with her annoying voice and frequently patronising narration, and the “million unanswered questions” the narration refers to, nearly extinguish the fire.

Katia and Maurice were born in the hotly contested region of Alsace (now in France) in the middle of World War II and met in 1966, when Katia Conrad was 24, and Maurice Krafft was 20. Their mutual inclination to escape from humanity might have stemmed from their earliest memories of war, but they bonded over their love of Mount Etna. They went to the volcanic island of Stromboli for their honeymoon and children had no place in their plans.

There is not much about their private lives in the film and the producers lament the absence of footage of the two of them interacting. What is documented is in Katia’s books and Maurice’s films – made to earn money for their expeditions. There are a few television appearances, too, in which they talk about their quarter century together chasing erupting volcanos in Iceland, Zaire, Colombia, America and Japan.

Hirsute, round and jolly like a teddy bear, Maurice was a geologist with a love of dinosaur fossils, and Katia (who studied at the university of Strasbourg) was a geologist, petite like a pixie with short hair, round glasses and a lively smile.

In a television interview they are asked what they talk about when they are “out on the rocks.” Maurice replies impishly, ‘Katia talks about food all day.’ That’s the only time food, or the mundane issues of housekeeping and life in general crop up.

The couple believed that “once you have seen an eruption, you can’t live without it” and felt only frustration when they were too late, or when the need to make money created scheduling conflicts. Maurice says, ‘I’m not a filmmaker. I’m a travelling vulcanologist who has to make films to keep going.’ But the films are their legacy.

For the first summers of their relationship they studied Etna and Stromboli with a group, before venturing out on their own. We see them wearing makeshift heat protection suits straight out of a Sci-fi movie. Despite the gear, two years after they met Maurice’s leg was burnt by hot mud (of about 140 degrees) but that was hardly going to stop their explorations.

Five years later at Nyamulagira in Zaire, a volcano that lies between two tectonic plates, they look into a huge abyss as lava of 1,200 degrees Celsius plunges down in seconds, sucking in everything around it like a black hole. ‘We are crazy to remain,’ Maurice says, ‘but we do. Curiosity is stronger than fear.’

Katia loved rushing into craters, but, she adds, ‘we avoid errors.’ Where Katia drew the line was when Maurice insisted on canoeing in the largest lake of sulfuric acid in the world. She sits on the shore while he ventures out with another geologist. ‘I like to do what people tell me not to,’ he says, a clue to his motivation. The mission is quickly over however when the acid starts eating into the bottom of the canoe.

The decision to replace the usual “talking heads” with Miranda July’s lyrical narration was probably made to balance the film, since Maurice does most of the talking, or to fill the screen with astonishing visuals rather than talking heads. But in this case, a few vulcanologists or other qualified experts would have been helpful to put the Krafft’s work and legacy in context and hear about how their films and photos contributed to the studies carried out by a small community of vulcanologists.

We come close to learning a little about this contribution when, in the mid-1980s, the Kraffts are part of a group calling for governments to warn locals of imminent eruptions, insofar as one can predict them. But after hearing that the Colombian government ignored them, to the detriment of up to 25,000 dead in a massive eruption, we hear no more about this project.

The scenes of these two mortals chasing rivers of lava and frying eggs on rocks, however are awe inspiring, are episodic, and do not provide the tension of dare-do documentaries like Man on Wire or Free Solo, National Geographic’s documentary of rock climber Alex Honnold’s attempt to conquer El Capitan in Yosemite National Park without a rope. The Kraffts were not sporting dare devils.

Nor, however, are the Kraffts scientists in the conventional sense of the word. For one thing, they eschewed the scientific classification of volcanos. They believed that each was unique within two very general categories of volcanos. The red spew out terrifying showers of red lava while the grey produce huge smoke clouds that are actually more perilous than the liquid gas red volcanoes.

And it was the pyroclastic flow – the speeding current of scorching gas – of Mt Unzen’s grey smoke clouds that killed the Kraffts and another volcanologist in 1991. It took them by surprise with the speed of its reach as they were staking it out, cameras fully loaded.