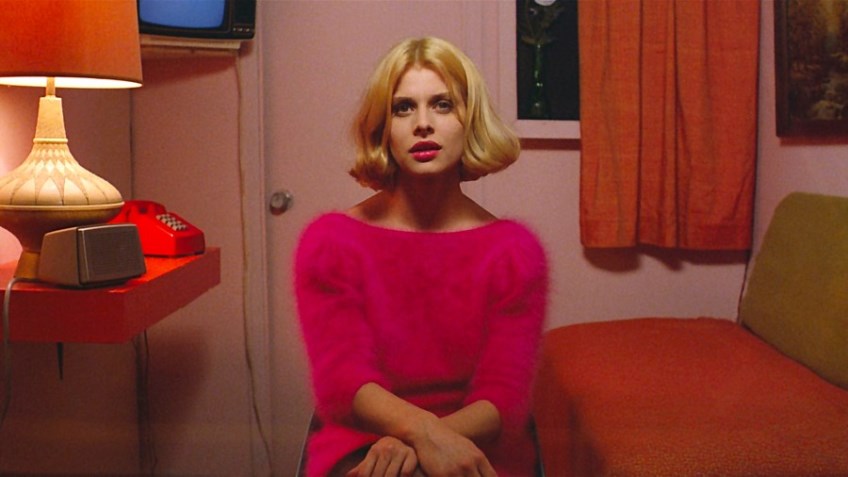 Curzon Cinema’s Wim Wenders’ season began early in July with an extended run of 1987’s Wings of Desire. It concludes with an extended run of the Palme D’Or winning Paris Texas, (with a resplendent new print). Paris Texas was shot in only five weeks in 1983, primarily on location in west Texas during the years when the German director, who had become fascinated by American cinema while studying art in Paris, cast a unique perspective on the American landscape, people, music and folklore. What is more American than the amalgamation of a road movie and a Western, particularly one that, like John Ford’s 1956 The Searchers, has a lonely man wander through Texas looking for his abducted niece?

If you saw the film when it was first released, and remember nothing else, you might remember an unshaven Travis Henderson (Harry Dean Stanton), walking through the desert in a dusty, tattered suit and red cap with a vulture eyeing his last swig of water. When he arrives at a small compound, and helps himself to ice in the freezer, he collapses and is treated by a hirsute German doctor (Bernhard Wicki).

When the traveller (note the name T-r-a-v) comes to, he is mute and with no memory. The doctor calls a number in the man’s pocket and speaks to his astonished brother Walt (Dean Stockwell) who lives in Los Angeles with his French wife, Anne (Aurore Clement). Anne’s first thought is what they will tell Hunter (Hunter Carson), who, we learn, is Travis’s seven-year-old son. He has lived with the otherwise childless couple for four years, ever since his estranged mother, Jane (Nastassja Kinski), committed him to their care. ‘Tell him the truth’, Walt says.

Walt arrives at the rundown clinic in Terlingua (population 110), exhausted, only to learn that Travis walked off that morning, and Walt has to pay the bill. Walt finds his brother wandering through the desert and manages to get him into the car, but Travis won’t talk. Travis wanders out of a motel where they stop, giving Walt the slip when he goes into town to buy his brother new clothes. They are reunited.

Then Walt asks Travis if he remembers Hunter. He says they have unofficially adopted him as they could not locate him nor Jane. Suddenly Travis’s memory comes back. ‘Paris’, he says. ‘Can we go there?’ Believing Travis is referring to Paris, France, he jokes that it’s a bit out of the way. Travis holds a map of Texas.

When they drop off the rental car at the airport, Travis refuses to fly, leaving the plane when it is on the runway about to take off. Walt is annoyed that he will lose two more days of work driving back, and to make matters worse, Travis insists on their renting the same rental car from a bemused car rental clerk (Claresie Mobley).

As they drive west across country Travis shows Walt a photo of an unprepossessingly empty lot in Paris, Texas. Travis cannot recall why he purchased the lot but later in the film we learn that this is where Travis was conceived. The location joke came from their father who would tell people that his ordinary wife was from Paris, leaving them to believe she was a “fancy woman” from France.

The middle section is set in L.A. Travis tries to adjust to this new, but temporary life and reestablish a relationship with Hunter, who at first is wary of his father and embarrassed to be with him. After watching home movies of the two couples on a beach holiday when Hunter was three, Hunter grows closer to his father. In one touching moment, he says ‘goodnight dad’ to both men. When Anne tells Travis that Jane sends Hunter money from a bank in Houston on the first Wednesday of every month, Travis makes a decision to find his estranged wife.

In the third part of the film, Travis drives across country to Houston, this time with Hunter, who tells his father that he wants to go with him to find his mother – even if it means not saying goodbye to his foster parents. Travis must have taken the fact that Jane sends Hunter money as a sign that they must be reunited. At this point, we still do not know what Travis did to break up the once happy family, but we find out.

Walt and Anne are distraught when they learn the news, but do not call the police. Wenders leaves us to ponder the moral question of Travis’s decision which affects the lives of four other people, only one of whom, a seven-year-old, he has consulted.

Wenders (whose road movies include Wrong Move, Kings of the Road and Alice in the Cities), relies on the atmospheric cinematography of Wenders’ regular Robby Müller, the plaintive guitar score of Ry Cooder and a script by Sam Shepard and the actor turned producer-scriptwriter L.M. Kit Carson (Hunter’s real life father, with actress Karen Black) to fulfil his vision. You know you will get a modern day western packed with imagery, and the sense that everyone is on the move, searching.

From the outset, the backdrop to Travis’s wandering and to Walt’s driving, are the endless highways and railway tracks. It is no coincidence that the stability Anne and Walt have given Hunter is precarious. Their comfortable house balances on the steep incline of a hill above a major highway and with a view of an airport runway.

At the end of the journey is the Meridian Hotel, Houston offering a vertiginous view of the city and its roads to everywhere (an inspirational image perhaps for 2003’s Lost in Translation). In one interim scene Walt and Travis stand high above the road in one of Walt’s billboard sites, billboards featuring images of desirable objects and locations. On the side of the peep show building where Jane works, is a graffiti image of the Statue of Liberty, reminding us that Wenders, as well as the German doctor and Walt’s French wife Anne, are part of the American melting pot.

And while the Paris Texas conceit is not as neat as one would like, the film was, like The Searchers, always about the quest for the girl, even if her place of employment is as disappointing as it is questionable and the peep show confessional more David Lynch than Wim Wenders. Travis’s father had to invent an exotic image of his ordinary, hardworking wife, while Travis could never believe his gorgeous, much younger, exotic woman would remain faithful to him. His misreading of his wife is a self-fulfilling prophecy that ruined many lives although, like John Wayne, he becomes the sacrificial hero who must wander alone. While the acting is sensational (Hunter Carson an intuitive child actor who never fulfilled his promise) the lack of chemistry between Stanton and Kinski detracts from the emotional punch of a memorable ending.